The Car and Carriage Museum is closed for repairs.
Exclusive Exhibition in The Frick Art Museum Rotunda

Protection is a subject the artist has been exploring since 2017. For his installation at the Frick, the body of works curated carries great emotional and historic depth infused with religious iconography such as rosaries and medallions blended with cultural references. The series of mixed media artworks are a combination of collaborations with women artisans whose craftsmanship expertise includes weaving, embroideries, and embellishments that are well spread across Rwanda. Protection is an ode to life and poetic exploration of faith as the ultimate haven.

Protection is about the memories I had, what I have seen after the Genocide against the Tutsi in 1994. In the 2000s, a few years after the genocide, my mother would not let me leave the house if I was not wearing a rosary. I had a rosary that was very tight to my neck, i always had it with me and so did my sisters. I wanted to use the rosaries as a medium to tell a story. 1999, five years after the genocide, people in my village were still taking bodies out of common graves. I have a strong memory of seeing piles of dead people all wearing rosaries and medals. One of my friend's father was killed in a church in Rwanda during the genocide. He wrote a play where he walked around the country and planted trees in front of the churches. He asked me to help him with this project, and I started doing research. I kept thinking about these people, my friend's father, and so many who were killed in churches, the contradiction of it: the fact that they were looking for protection and instead found death.

Cedric Mizero was born and raised in a small village called Gishoma in the Western Province of Rwanda. Since he was a teenager he enjoyed experimenting with his clothes and trying styles that would catch the eye of the community around him. In 2012 he moved to Kigali, the capital of Rwanda, where he started to interact with fashion designers and artists who supported him in his initial experimentation with conceptual art and fashion creation. A self-taught artist, Mizero enjoys observing and exchanging with other artists and artisans to learn from their techniques and hard work to stay inspired and motivated with his own development. He chooses to mix disciplines in his work, experimenting with paint, textures, fabrics and still objects, allowing himself to navigate freely through feelings and emotions to bring to his art a voice for love. 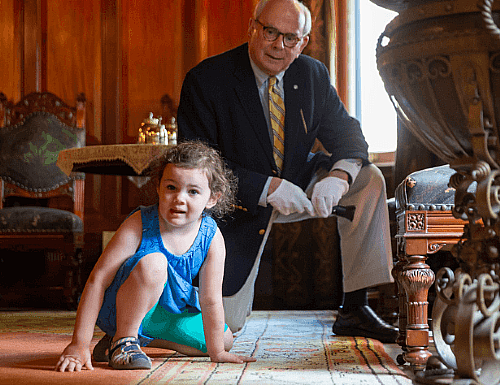 Immerse yourself in the restored home of the Frick family.
END_OF_DOCUMENT_TOKEN_TO_BE_REPLACED