The Frick Pittsburgh stands with our community in defense of civil rights and is working to become actively anti-racist. Read our full message.

A Season of Celebrations

This holiday season, Clayton’s tour reimagines the events of 1908, when Helen Clay Frick made her debut on December 16 (also her mother, Adelaide Howard Childs Frick’s birthday). Adding another facet to the customary holiday decorations at Clayton, the debut installation is derived from a wealth of archival information documenting Helen’s party, including photographs, newspaper descriptions, receipts, and Helen’s own scrapbook. Mural-like photo-enlargements will immerse visitors in the past while decorations evoking the splendor of the party will join the traditional poinsettias and greenery of the holiday season to offer a fresh perspective on the Frick family’s Christmas festivities in 1908.

In the early 20th century, a debut was a young woman’s official introduction to society. She was typically presented by her mother at a party the family hosted at home. The debut normally occurred at the height of the social season (November to January) and dinner and dancing were a must. 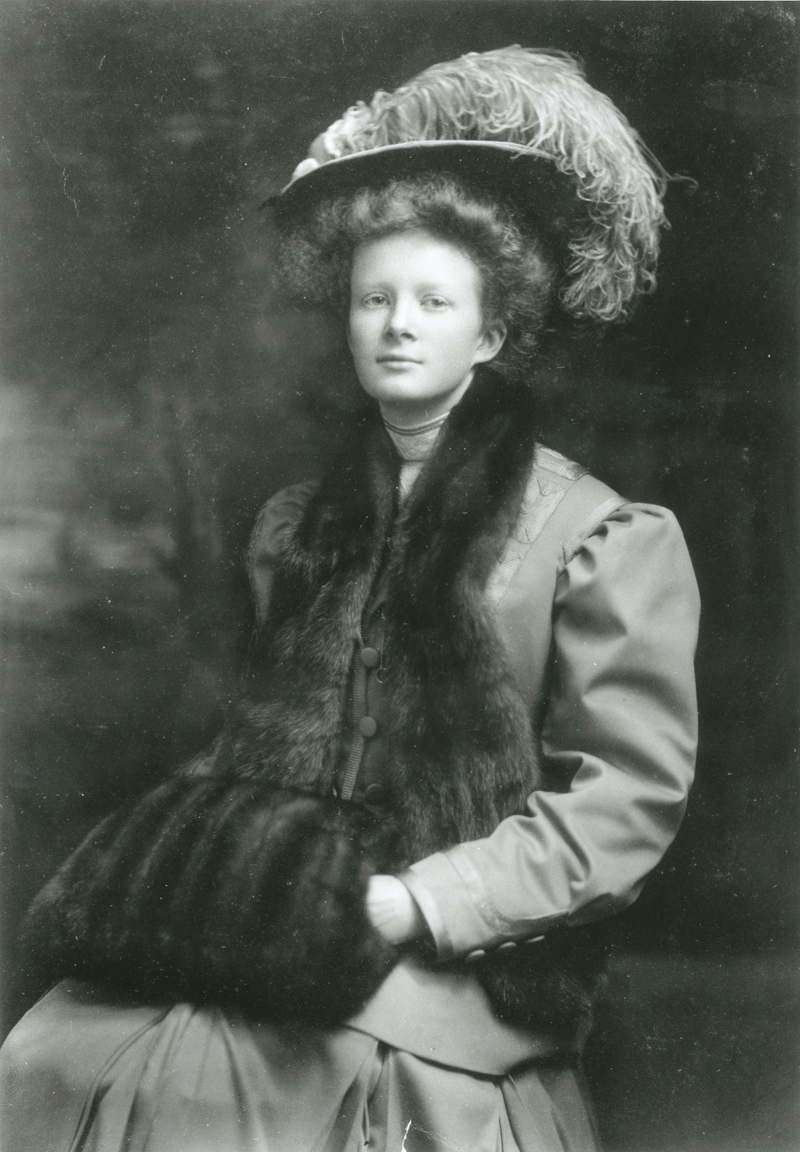 By 1908, although the Frick family was spending most of their time in New York or their Massachusetts summer home, Helen remained attached to her childhood home in Pittsburgh, so much so, that she insisted her debut take place at Clayton. Mr. and Mrs. Frick hosted an afternoon reception, followed by dinner and a ball in the evening for the younger set. Archival records detail the extensive guest list, which numbered in the hundreds.

Reports of the grand event appeared in numerous society pages including The Index, Pittsburgh Press, and the New York Times. Clayton was abloom with flowers for the occasion. Ferns and palms created a background for the receiving party while floral decorations throughout the house contained rare and exotic blooms grown in the family’s greenhouse, including orchids and roses. The reception room and parlor overflowed with bouquets received by the debutante. 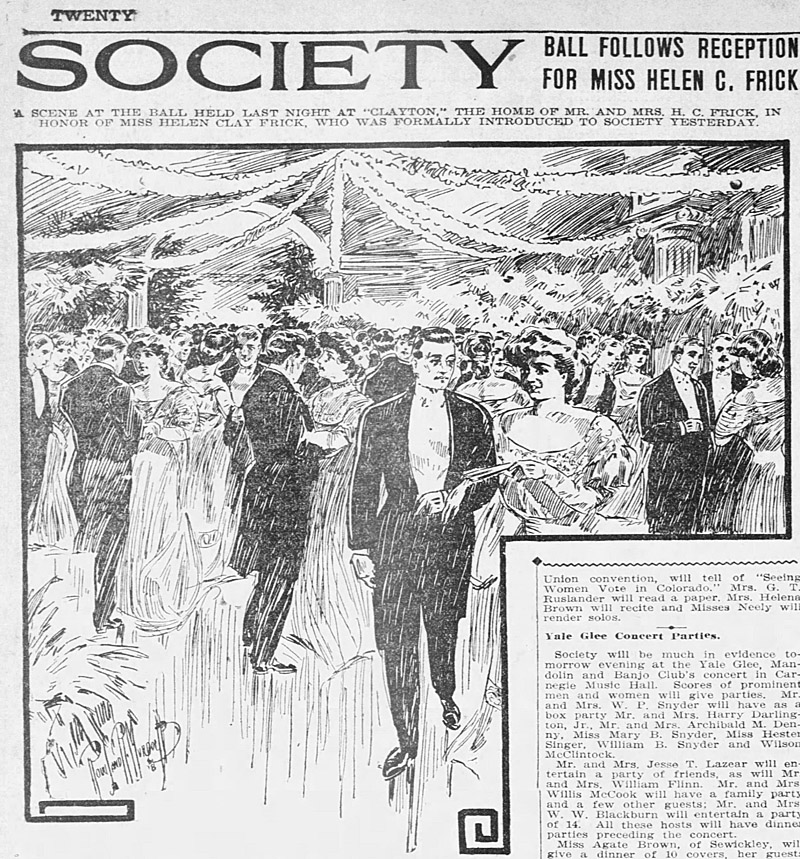 Helen stood alongside her mother to receive guests. Mrs. Frick wore a gown of pale blue satin by Lichtenstein Cie Modes (which remains in the collection and will be on) while Helen wore a gown of white silk messaline overlaid with point d’esprit and trimmed with silver embroidery. One paper noted that “Miss Frick has a charm of manner, an earnestness, and a thoughtfulness far beyond her years; she is lovely in character. In feature, she is most sweet and smiling. She is fair, with blue eyes, and Titian wavy hair. She is fairly tall, very slender, and girlish in appearance.” The Pittsburgh Orchestra (as it was then named) provided music during the reception and dance. Silk-covered and leather-bound dance programs were purchased from New York stationer Dempsey & Carroll as party favors. 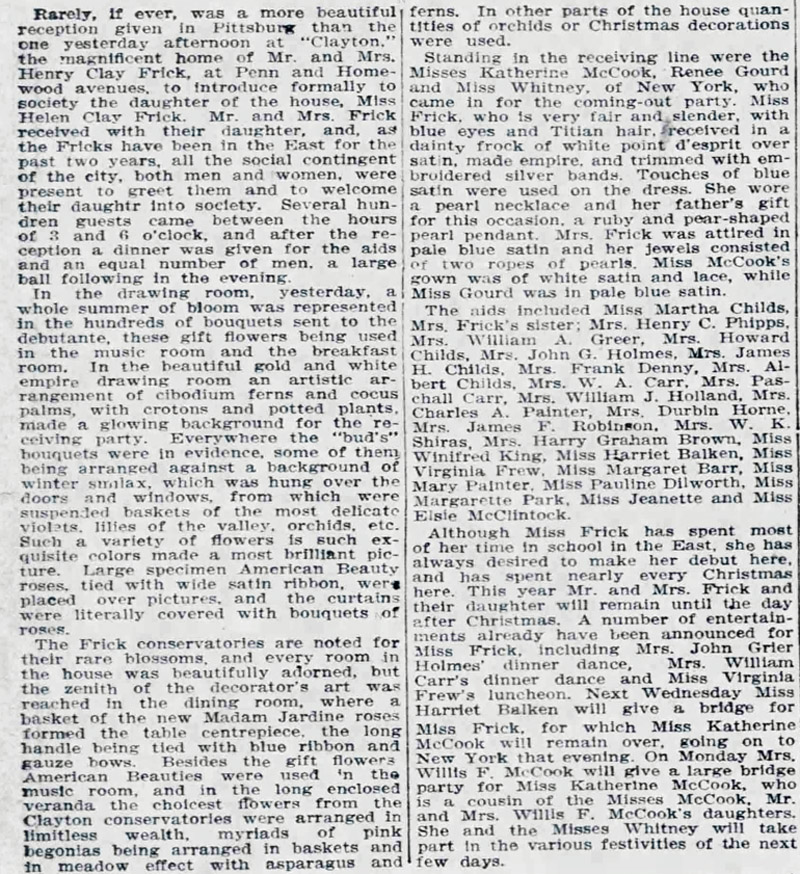 Helen’s party preceded a whirl of social engagements held the week before Christmas. Bridge parties and teas filled the afternoons while the evenings consisted of dinners, dances, and other merriment. The Index, Pittsburgh’s weekly society paper, remarked on the exhilarating, yet exhausting, barrage of events in their December 26, 1908 issue: “Surely a Christmas holiday season was never before so gay—so far as Pittsburgh is concerned—as the one we are now enjoying. There have been invitations, two or three deep for every hour of every day for the last fortnight. So many, in fact, that one could wish they might spread out a little more and give one a chance to rest up between times.” 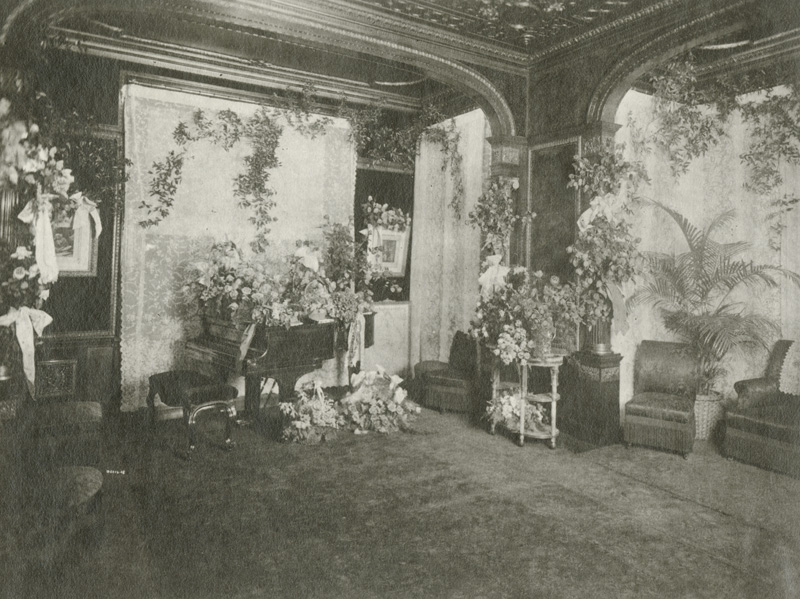 Experience A Season of Celebrations at Clayton