Visitors to the Chinese porcelains installation at The Frick Art Museum have been especially delighted by the collection of miniatures—and it’s easy to see why. The exquisite cobalt-blue decorated vases display innumerable enchanting details that reward close looking while the gem-like appearance of the monochrome glazes entices one from across the gallery. For those who know a bit about Henry Clay Frick’s collecting tastes, the miniatures seem a curious addition. How did they come to be in the collection? 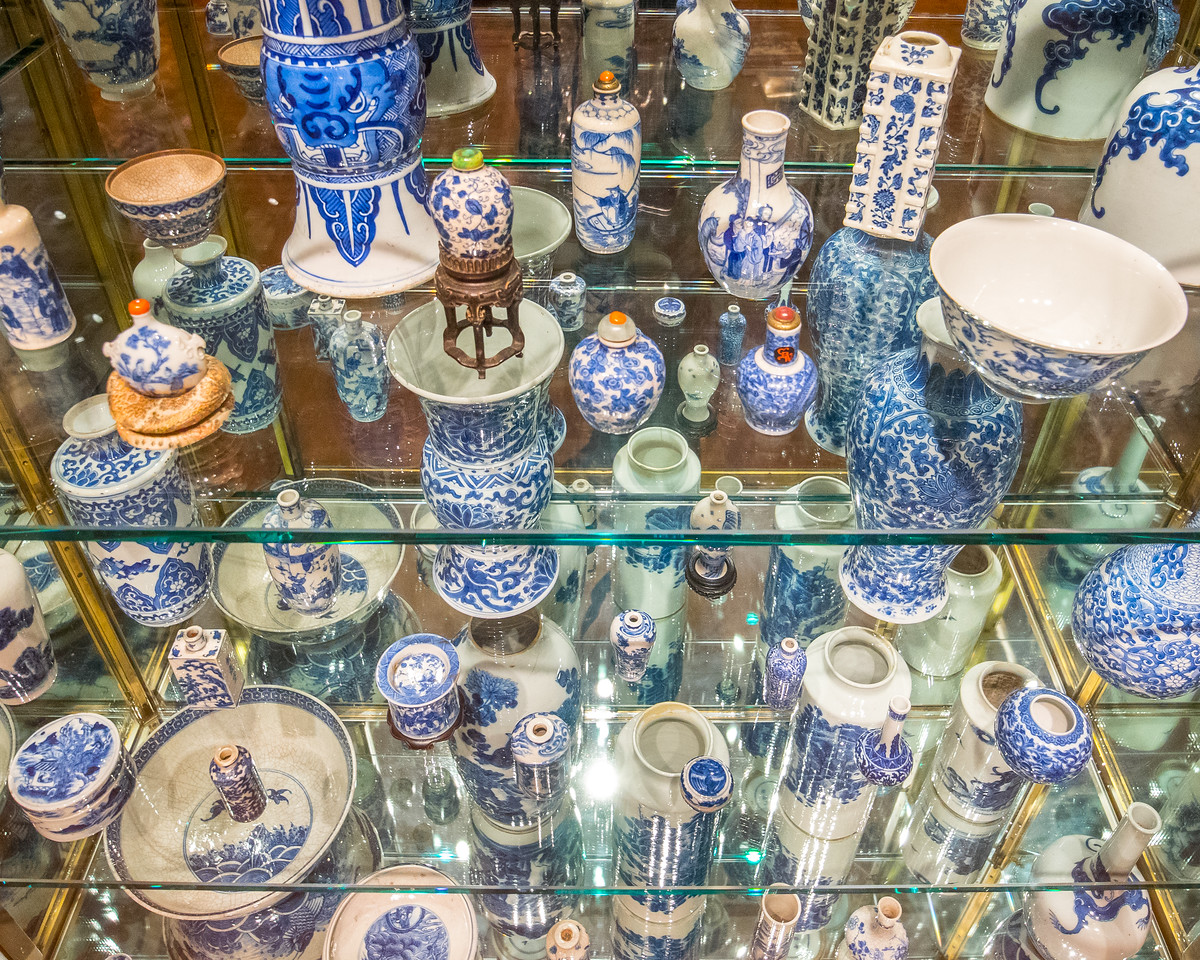 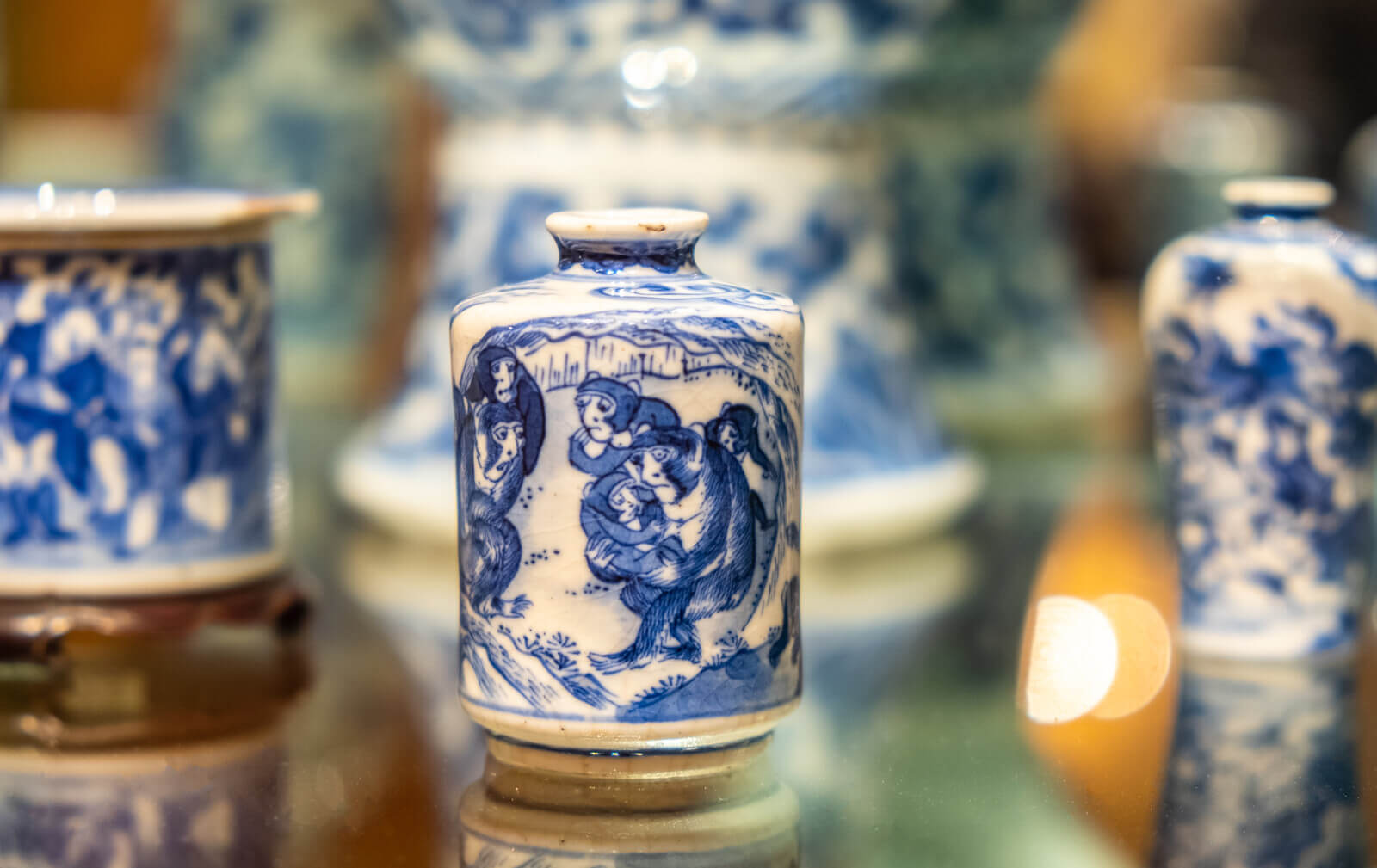 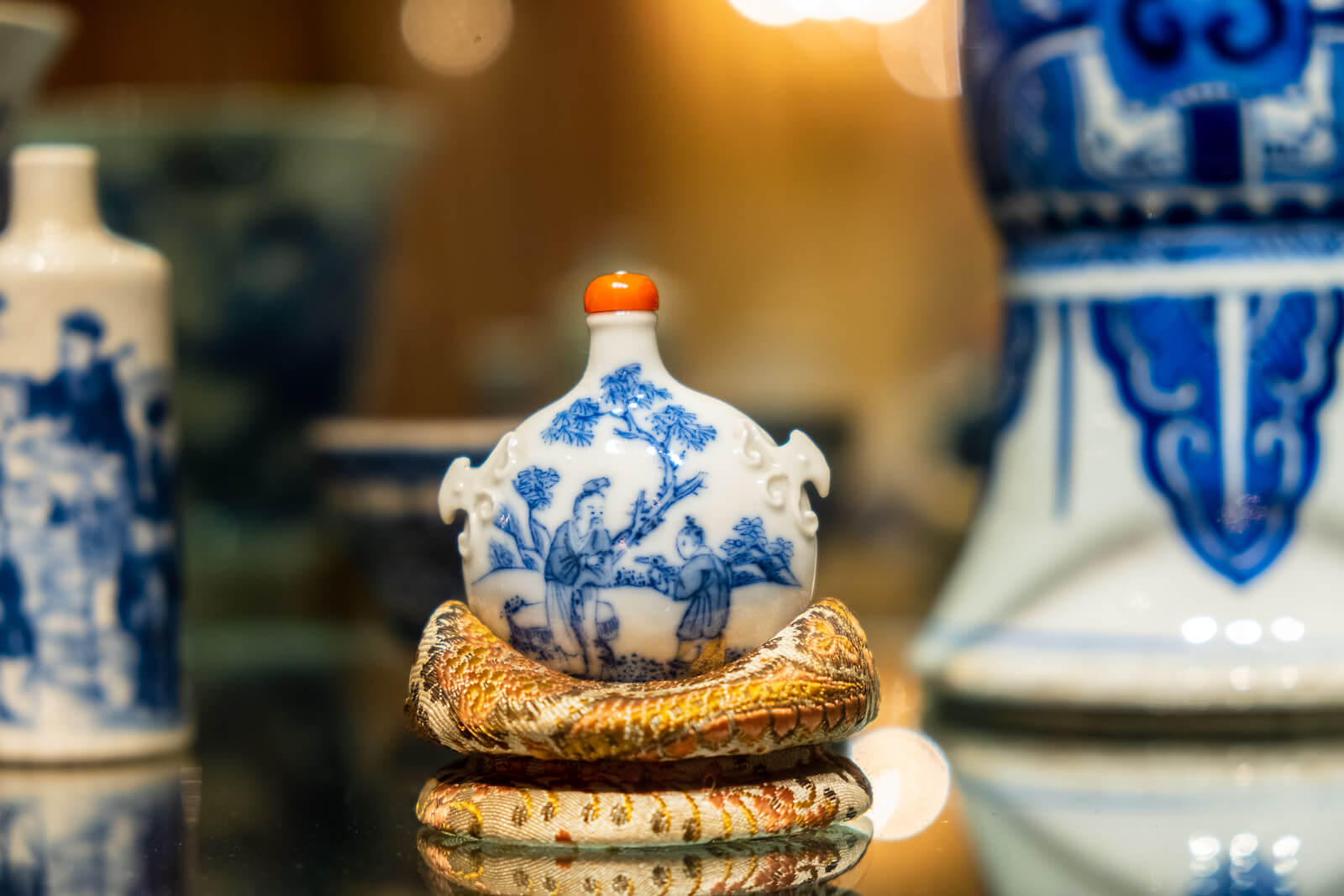 Chinese porcelain miniatures on display in the French room at The Frick Art Museum.

In 1906, Henry Clay Frick purchased a group of 124 miniature porcelains from the estate of ceramics connoisseur George B. Warren (1828–1905). Chinese porcelains were a new addition to Frick’s collecting interests in the early 1900s. As his taste for fine art shifted from Barbizon landscapes to Dutch Old Masters and English portraiture, Frick sought decorative objects that would complement his growing collection of paintings.

Because he was more interested in creating an environment that was complementary to his paintings and less in each individual object, Frick often looked to capitalize on already established collections. When Warren’s collection of Chinese porcelain miniatures became available, Frick took the opportunity to purchase a choice selection from a nationally known collection.

Warren was a prominent businessman and mayor of Troy, New York, in addition to being a socially well-connected gentleman. His wealth and status allowed ample opportunity to pursue his passion for art collecting, and he acquired pieces directly from the Far East or from import dealers. His assemblage of Chinese porcelain was well-regarded among his contemporaries and demonstrated the discriminating eye of a knowledgeable collector. In 1902, Warren published a catalogue of his collection with a note of introduction by ceramics scholar Thomas B. Clark. Of Warren’s 600-piece collection, Clark wrote that it was “an incomparable collection of the highest grades of porcelain in miniatures and cabinet sizes…No two pieces are alike and all are beautiful to look upon.” In the preface to the catalogue, Warren himself wrote, “The miniature character that prevails is my chief pride, for the little ceramics gems by their delicate artistry appeal with special force to my love of the beautiful.” (A copy of Catalogue of Antique Chinese Porcelains Owned by George B. Warren of Troy has been digitized by the Frick Art Reference Library and is available for perusing here.) 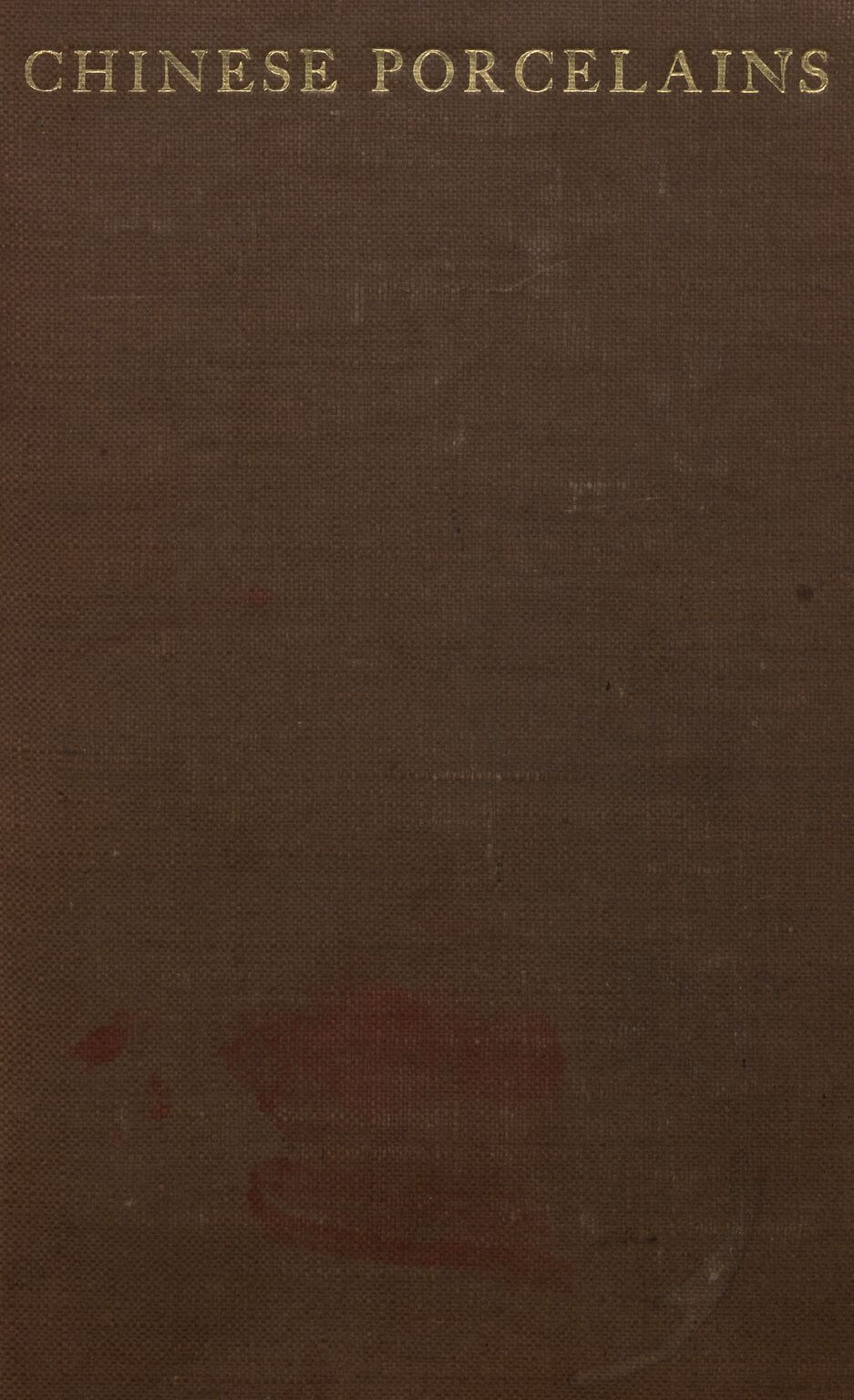 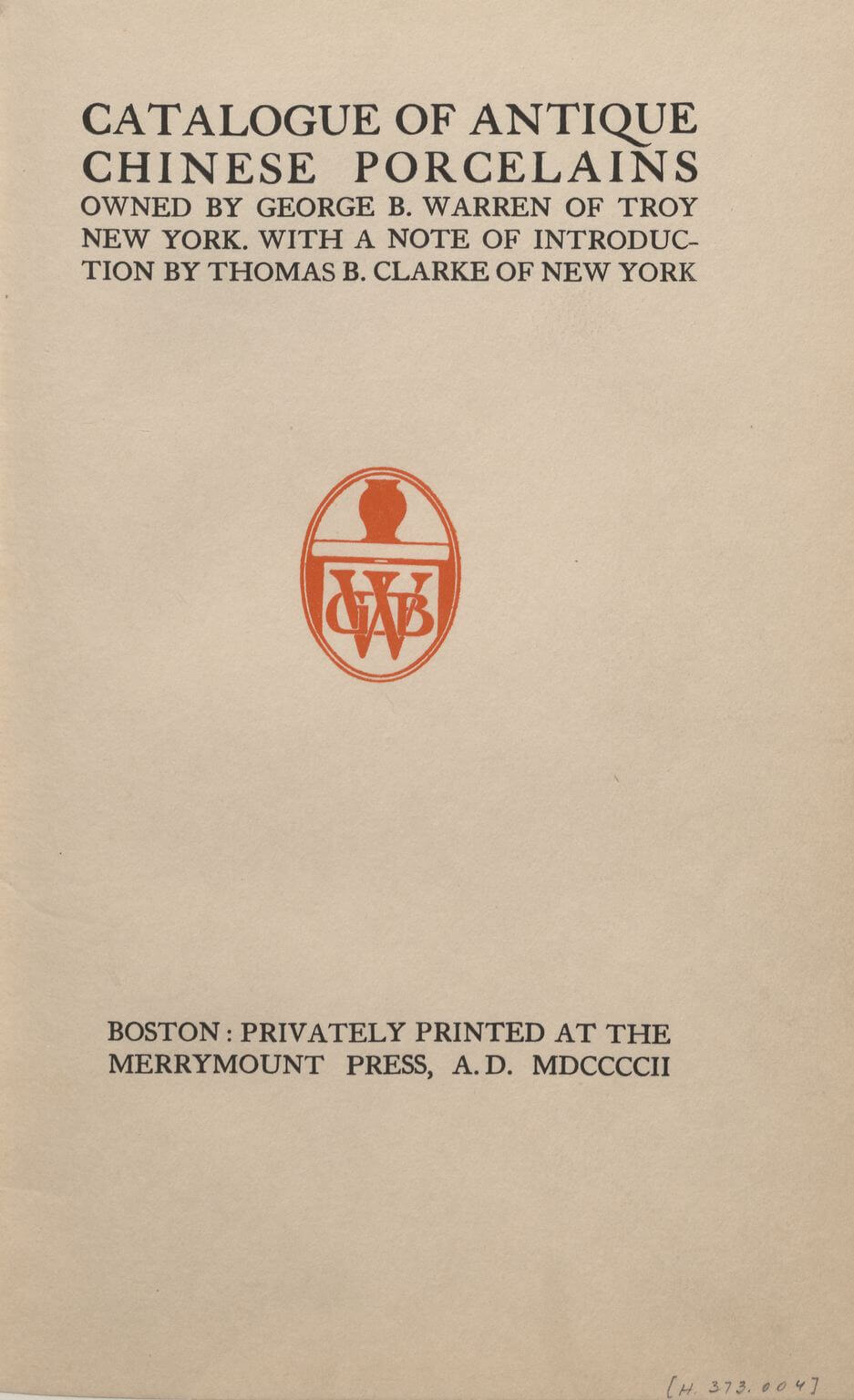 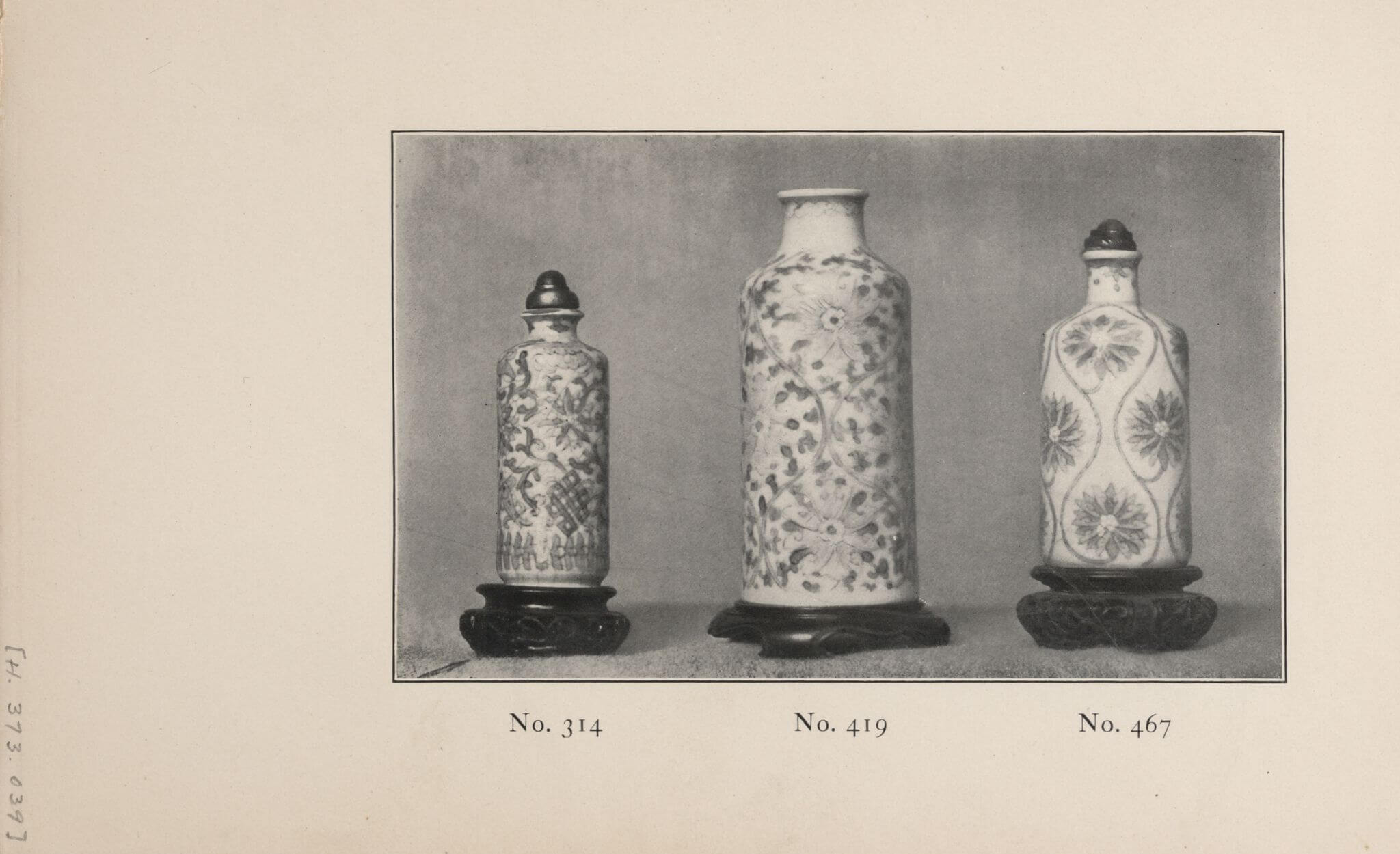 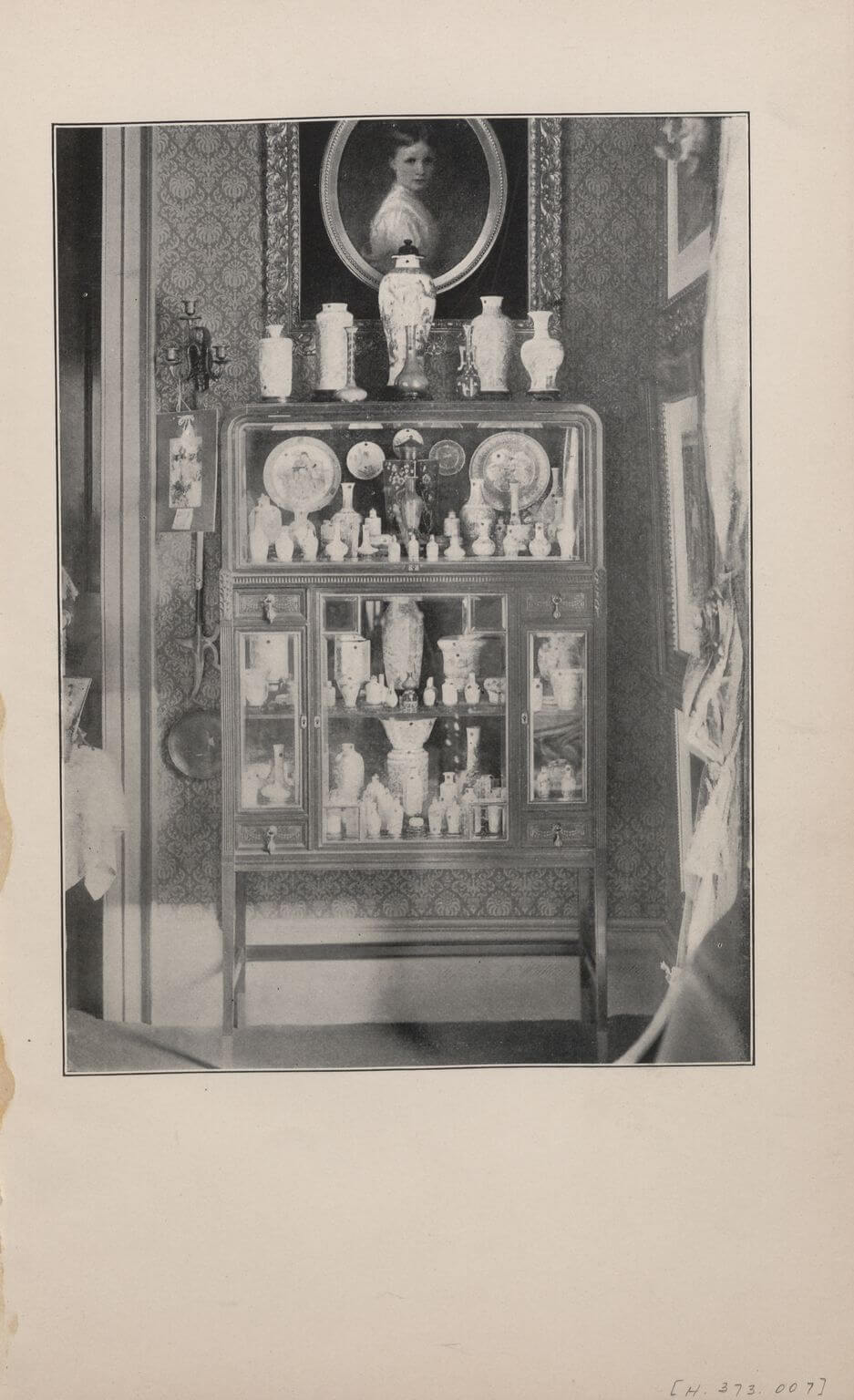 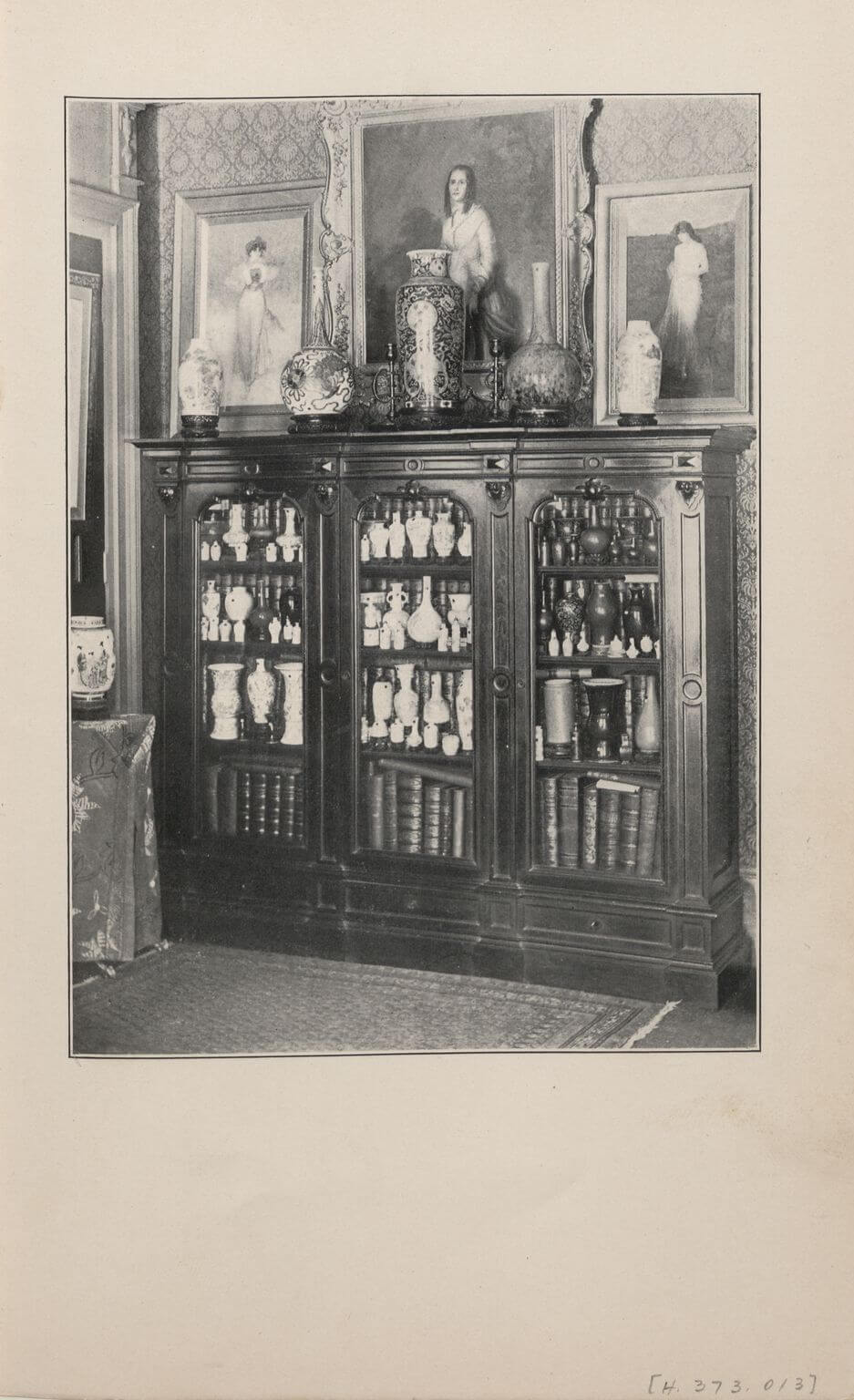 Following Warren’s death, his collection of miniature porcelains was shown at the art rooms of Gorham Company, the silver manufacturer, according to an item published in the New York Tribune on December 15, 1905. Perhaps it was this show that brought the Warren collection to the attention of the Duveen Brothers. A notice in the May 10, 1906 issue of The American Pottery Gazette announced that Henry Duveen of Duveen Brothers had acquired the estate of George B. Warren “known to connoisseurs the world over.” Frick’s purchases from the estate were his first from noted art dealers Duveen Brothers. The original invoice, dated October 18, 1906 and digitized by the Frick Art Reference Library, can be viewed here. (Frick’s relationship with Duveen Brothers would continue over the following decade. He purchased millions of dollars’ worth of Renaissance bronzes, Chinese porcelains, French furniture, and Limoges enamels from the estate of J.P. Morgan through Joseph Duveen between 1915 and 1918.) 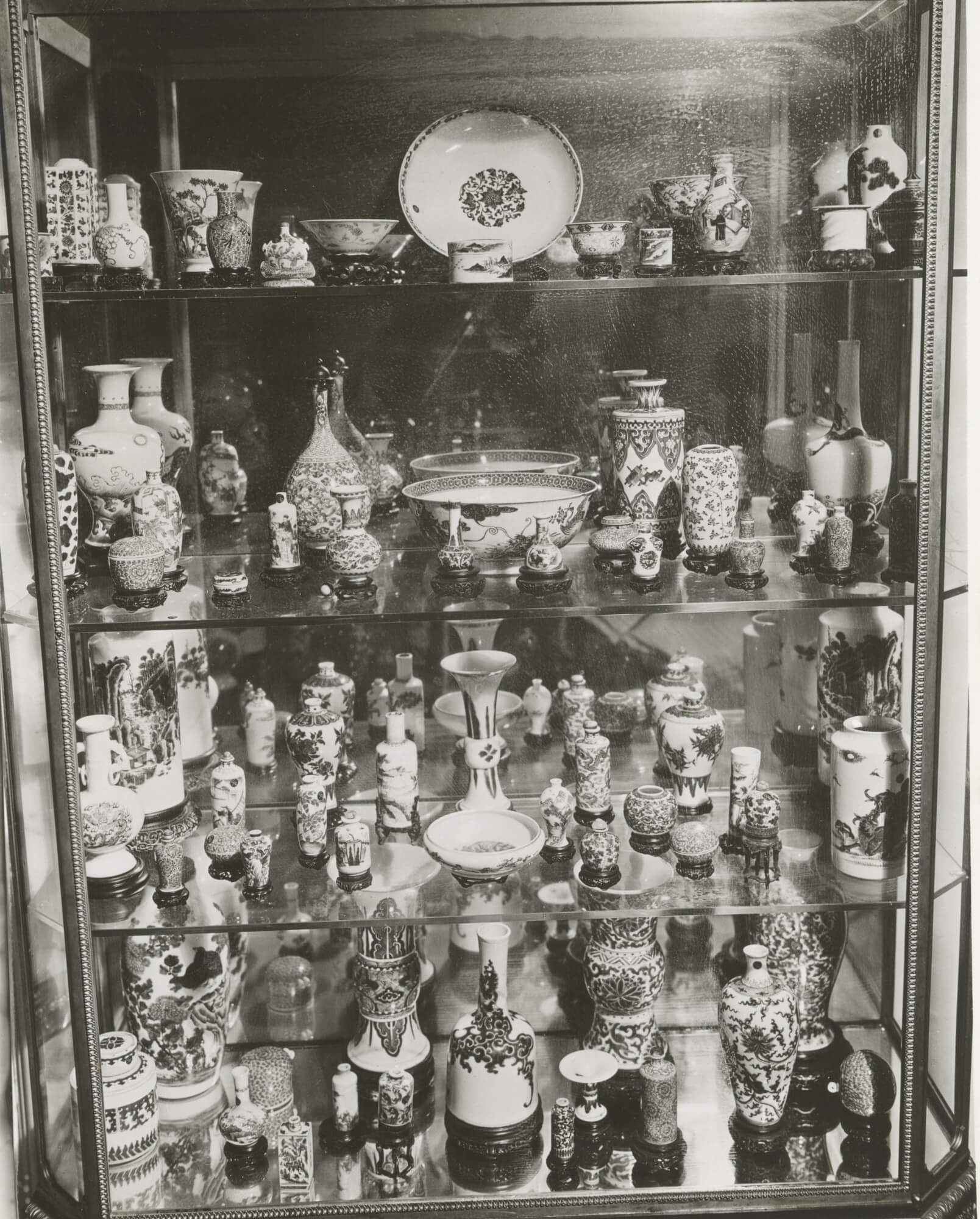 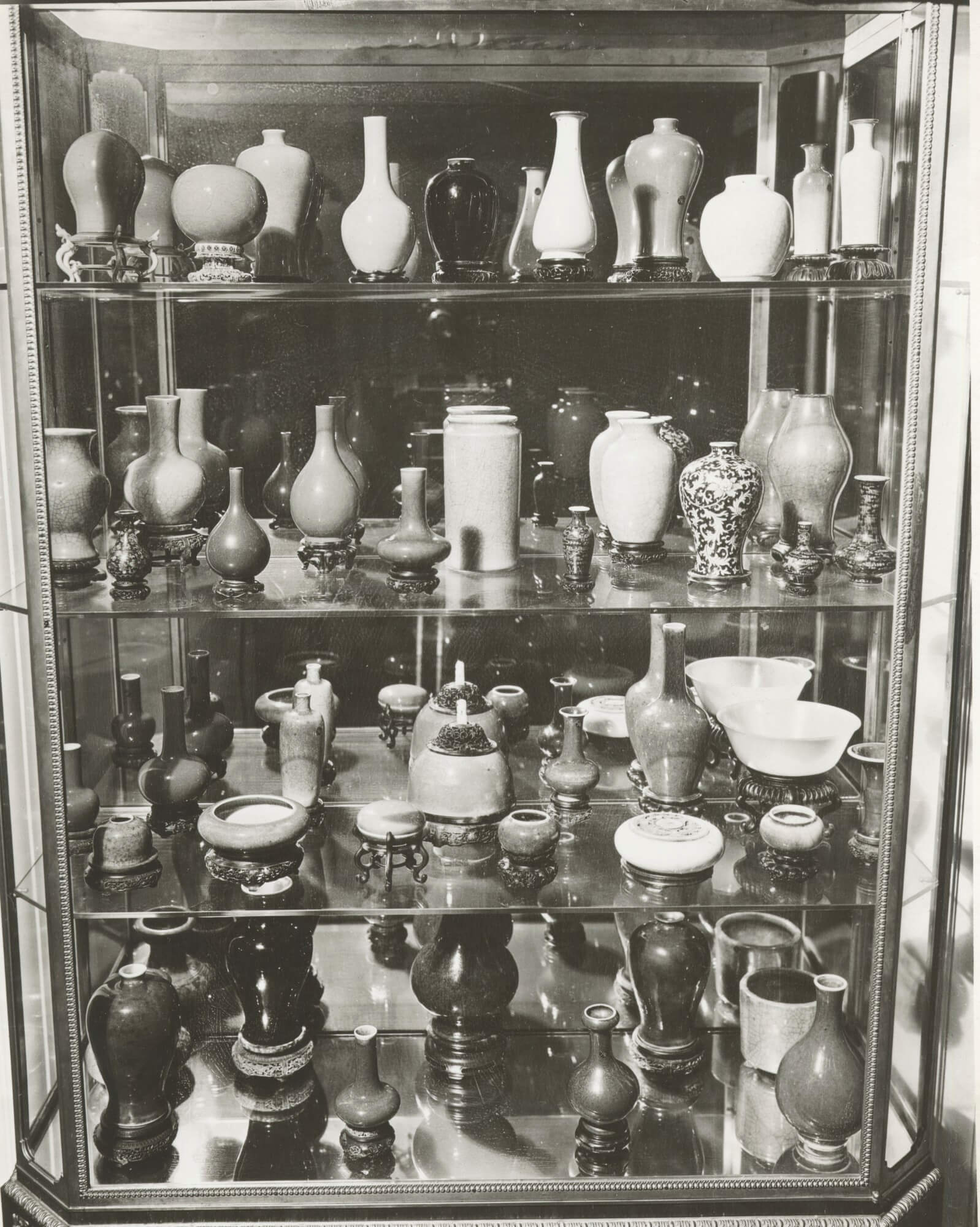 Frick’s interest in the porcelain miniatures for their decorative value is most apparent in how he chose to display them at Eagle Rock, the family’s summer home in Prides Crossing, Massachusetts, completed in 1906. Duveen Brothers supplied two matching display cases of ormolu (a gold-colored alloy of copper and zinc); one held monochromes, the other blue-and-white examples. One of these vitrines survives in The Frick Pittsburgh’s collection and is being used to display a selection of blue and white miniatures in our current exhibition. The mirrored back and shelves allow viewers to glimpse otherwise hidden details while also multiplying the visual feast so that there appear to be quadruple the number of objects. Interestingly, the cases are not dissimilar from the Renaissance Revival style vitrines in which Warren displayed his collection alongside books and paintings, as seen in the self-printed catalogue from 1902. The streamlined Neoclassical aesthetic of the cabinet rooms at Eagle Rock consciously evoked a mid-19th century French or English aristocratic interior, the prevailing taste for interior design in the early 1900s. 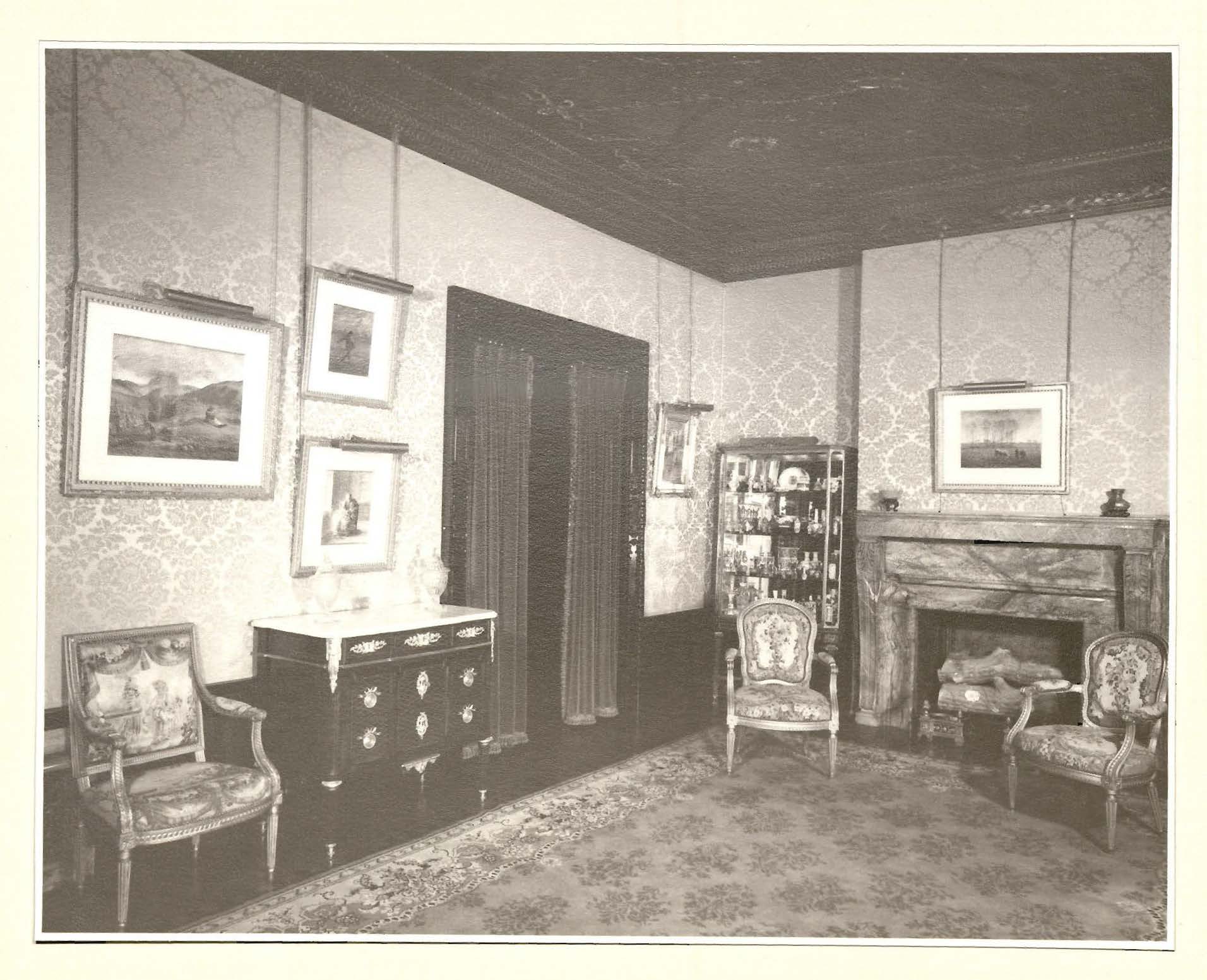 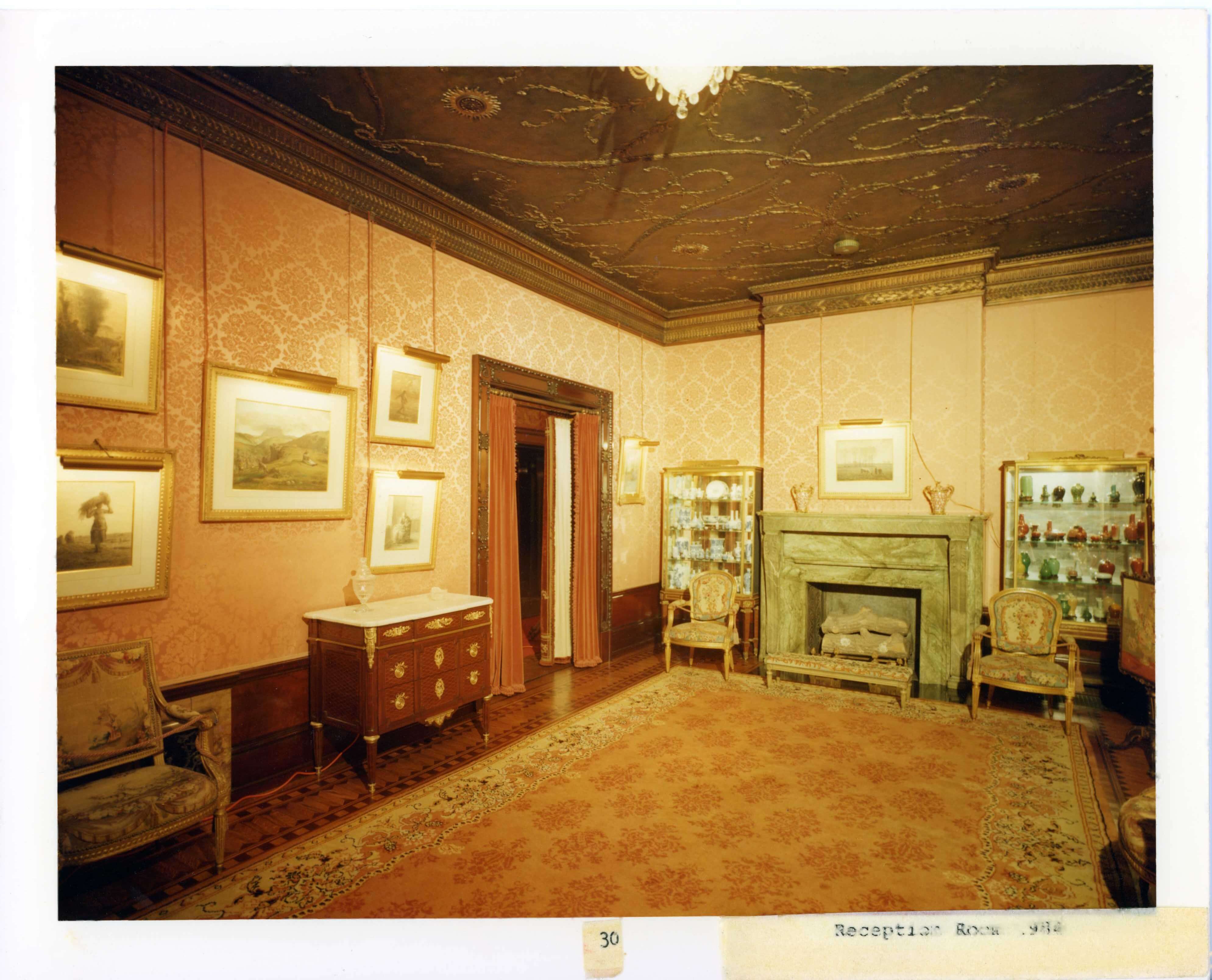 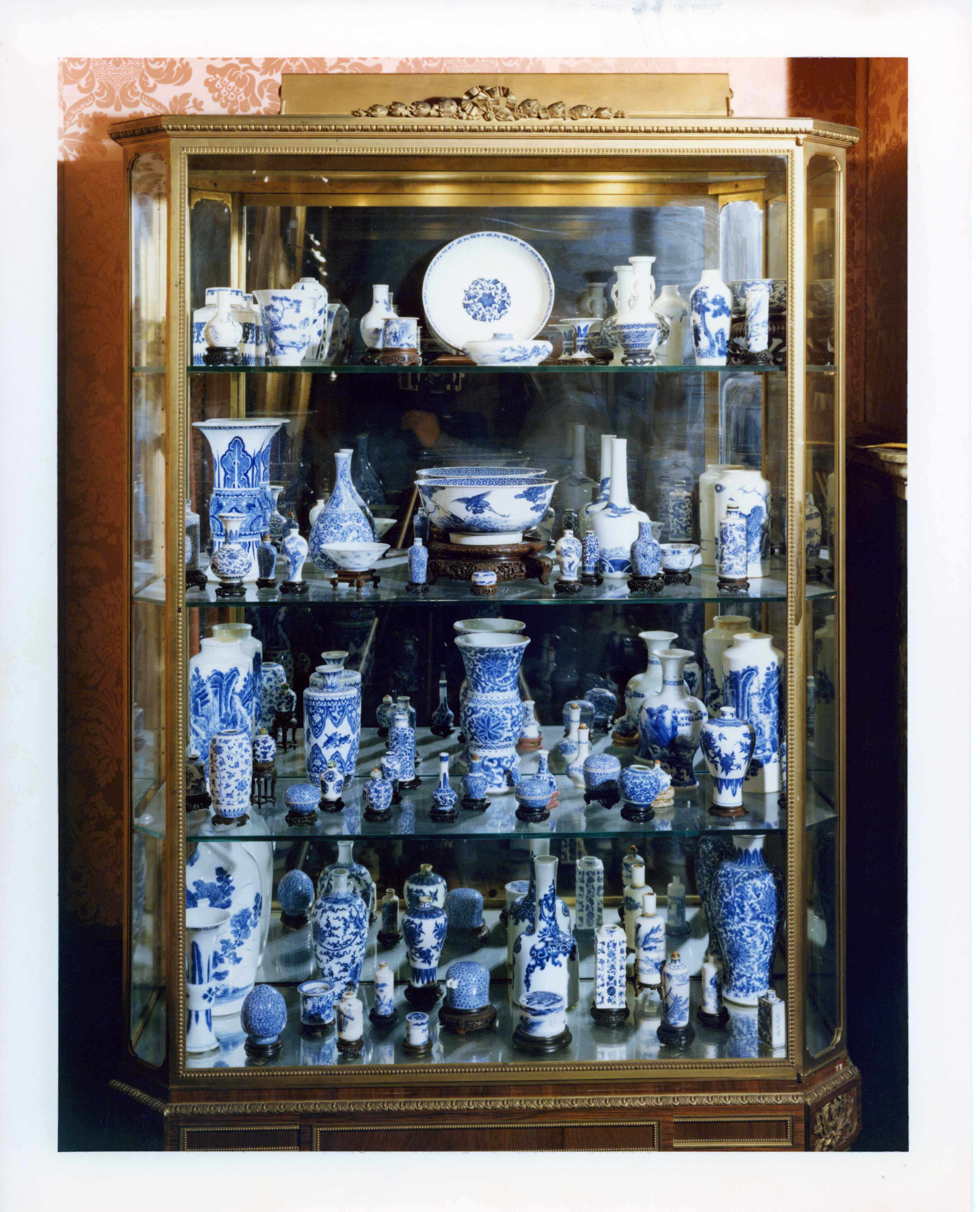 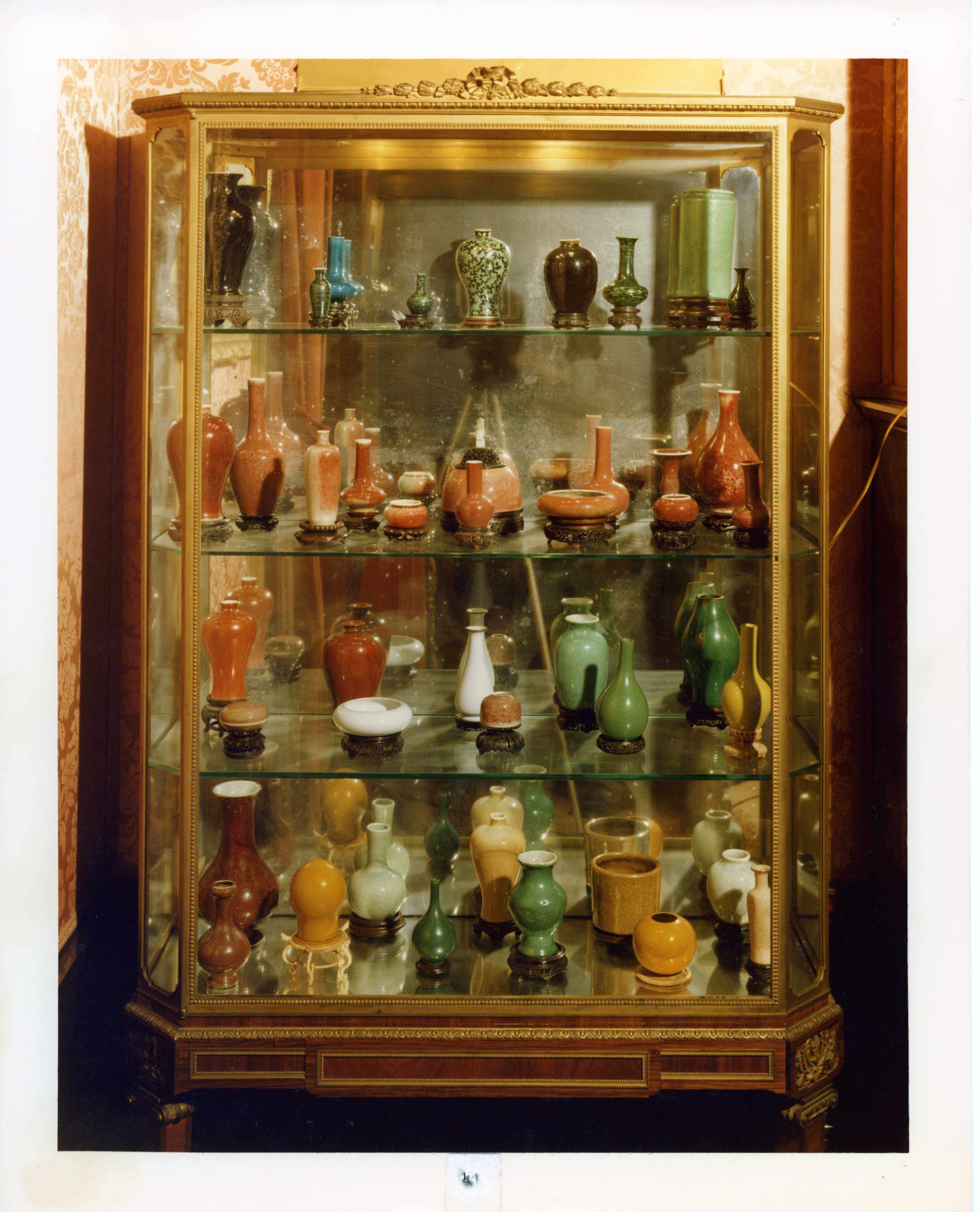 Miniature cases in the Reception Room at Clayton, c. 1950s (top), c. 1980s (lower). Helen Clay Frick inherited the miniatures from her father’s collection. During the 1950s, she installed the display cabinets in the reception room at Clayton. The Chinese porcelain miniatures remained on display at Clayton when Helen passed away in 1984.

While the method of displaying them fit within the established decorative tastes of the day, the miniatures themselves are very different in character than the other Chinese porcelains Frick purchased. By and large, Frick’s taste for porcelains tended toward brilliantly colored overglaze enamels with decorative imagery created for the imperial court or export to the West. There is an unusual charm and elegance to the miniatures when compared with the other objects on view and their riot of color.

Decorative imagery in the blue-and-white objects draws on traditional Chinese symbolism including auspicious imagery, figurative landscapes, literature, history, mythology, and religion. Archaism, or an interest in and reverence for the past, forms another important theme as several objects reference the shapes and motifs of ancient bronzes or ceramics from earlier eras. Several objects demonstrate forms associated with the scholar’s table, representing the aesthetic taste of China’s literati class.

Monochrome minatures on display at The Frick Art Museum.

The monochromes in particular have a more subtle charm and sophistication. Aesthetic appreciation focuses on the elegantly refined silhouettes as a vehicle for showcasing the innovative colors, achieved by the presence of various metallic oxides like iron, copper, and manganese, which react with the glaze during the firing process. Artisans manipulated a limited selection of coloring agents under carefully controlled kiln conditions to produce a range of subtle hues—mirror black, deep dark reds known as sang-de-boeuf or oxblood, imperial yellow, apple green, turquoise, celadon, an icy blue coined claire-de-lune, and the evocatively named “peach bloom” with its fugitive tinges of green. Many of the miniatures date to the 18th century, although spurious marks can mislead one into concluding that the object is older than it truly is. Curatorial staff continue to catalogue and research each individual miniature, and there will be more to share on their decoration, form, and history in the future. Stop in and see the beautiful detail on these small, stunning pieces for yourself. Admission to permanent collection installations is always free.
Previous Story: Making and Musing: Upcoming Programs at the Frick
Next Story: Preservation, Conservation, and Restoration (Yes, They're Different!) at the Car and Carriage Museum