Pink and red hearts, cupids, chocolate, little cards that children give to their classmates—all of these things may come to mind when one thinks of Valentine’s Day. The most romantic holiday of the year has a long and sometimes mysterious history, but it took centuries for February 14 to earn its reputation as the day of love.

Like many modern holidays, Valentine’s Day traces its origins back to the ancient Romans. During the middle of February, the Romans celebrated a festival called Lupercalia as a way to honor Faunus, the Roman god of agriculture. Lupercalia was more about ushering in spring and a fertile growing season than it was about love—though there may have also been a matchmaking component to the festivities. According to legend, at the end of Lupercalia, the city’s young women placed their names in an urn. If a woman’s name was chosen by a single man, the two young people were paired for the year, which usually resulted in marriage.

So where does St. Valentine come in? Many will likely remember hearing stories about the patron saint of Valentine’s Day, and the role he may have played in the founding of the holiday. The truth about his association with the modern Valentine’s Day is rather enigmatic. St. Valentine enters the story after the rise of Christianity, at a time when efforts were being made across Europe to Christianize the pagan traditions of many different cultures. The Catholic Church actually recognizes no fewer than three saints named Valentine, but no one is entirely sure which of these Christian martyrs is the namesake of Valentine’s Day. Some believe that St. Valentine was a priest who performed marriages in secret after they were banned by the Roman Emperor, Claudius II. That St. Valentine was eventually beheaded by the emperor for his efforts. Another story paints Valentine as a star-crossed lover who was a Roman prisoner. According to the legend, before his execution, Valentine wrote a final letter to his beloved and signed it, “From your Valentine,” creating the origin story for the valentine. While some believe that Valentine’s Day is celebrated in mid-February simply in recognition of the anniversary of St. Valentine’s execution, it’s more likely that the date was chosen to coincide with the traditional date of Lupercalia. Lupercalia was eventually outlawed by the Catholic Church, and in its place, Pope Gelasius declared February 14 St. Valentine’s Day.

While we may never know the true story of St. Valentine, the two stories have one thing in common—Valentine is portrayed as an undeniably tragic, romantic figure, either a defender of love or a star-crossed lover. While this certainly contributes to Valentine’s Day’s theme of romance, it was not until the Middle Ages that Valentine’s Day truly became the holiday of love. The first written valentines and love poems associated with the holiday appear during that time. In 1375, Geoffrey Chaucer’s poem Parliament of Foules made the first distinct reference to “Seynt Valentyne’s day” as a romantic holiday. Chaucer’s use of birds as a literary device is a reference to the medieval belief that birds choose their mates in mid-February. The oldest known valentine dates to 1415, when Charles, Duke of Orleans, wrote a love poem for his wife in which he refers to her as his “very gentle Valentine.” The Duke was imprisoned in the Tower of London at the time, drawing interesting parallels to at least one of St. Valentine’s origin stories.

Valentines began as simple, handwritten love notes, but the first commercially produced valentines appeared in the United Kingdom by the early 19th century. The cards could be fairly expensive, as they were more akin to beautiful pieces of art than greeting cards. The United States was slower to the commercial trend, as handmade cards—typically more humorous than romantic—remained the norm until the 1840s. That was when Esther Howland, noticing an opening in the market for beautiful, affordable valentines in the U.S., started producing valentines of her own. Opening a small workshop in her father’s home, Howland created all of the designs herself, and hired local women to help her construct the cards using an assembly line system. Howland’s cards were decorated with lace, images of birds and flowers, and romantic messages. Her business venture was hugely successful. During the 1850s, records indicate that Howland’s operation was earning $100,000 annually ($3 million in today’s currency), making Howland one of history’s earliest and most profitable female entrepreneurs. For bringing valentines to the masses and transforming the way Americans communicated about love, Howland is now known as the “Mother of the American Valentine.” 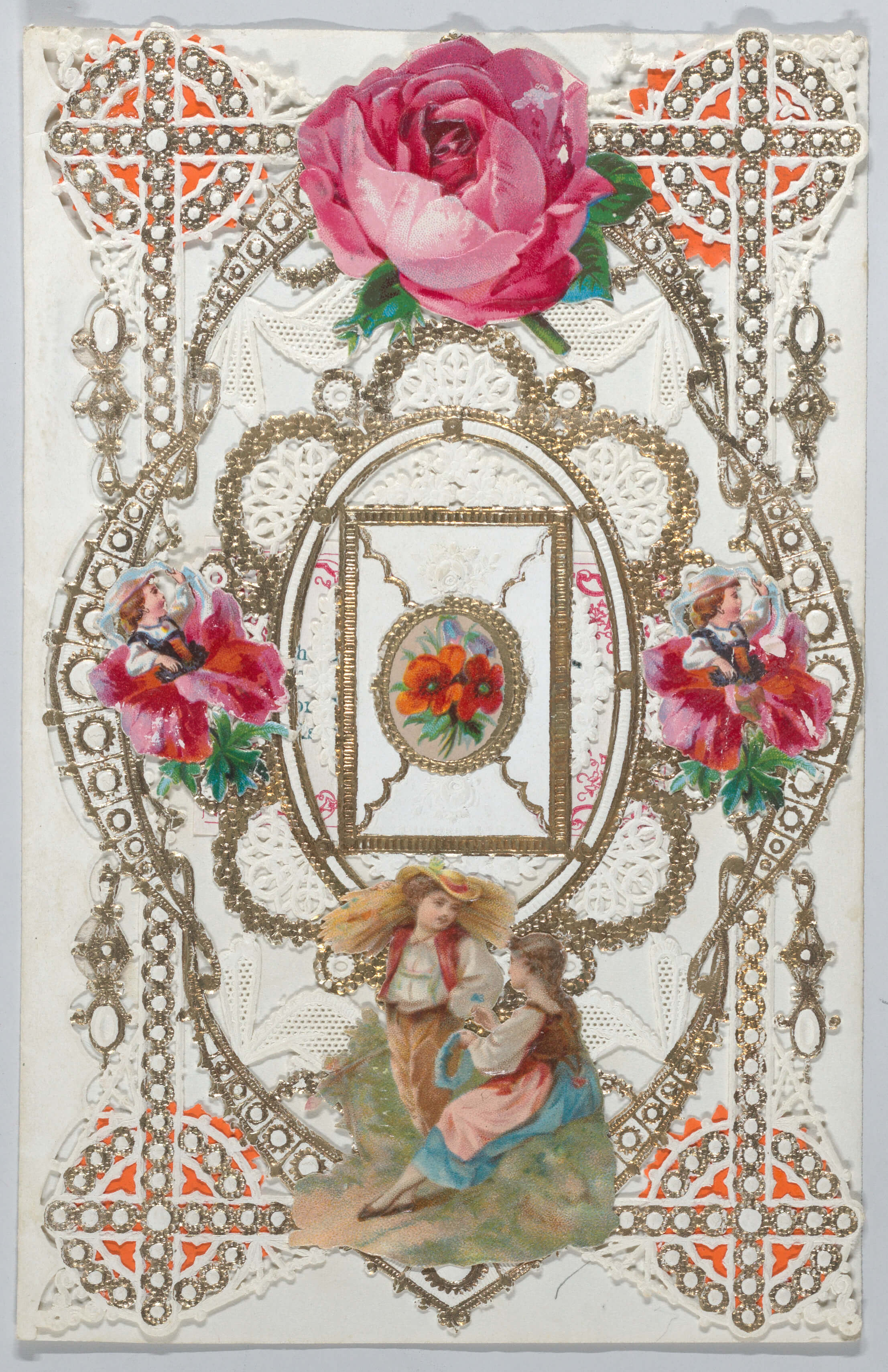 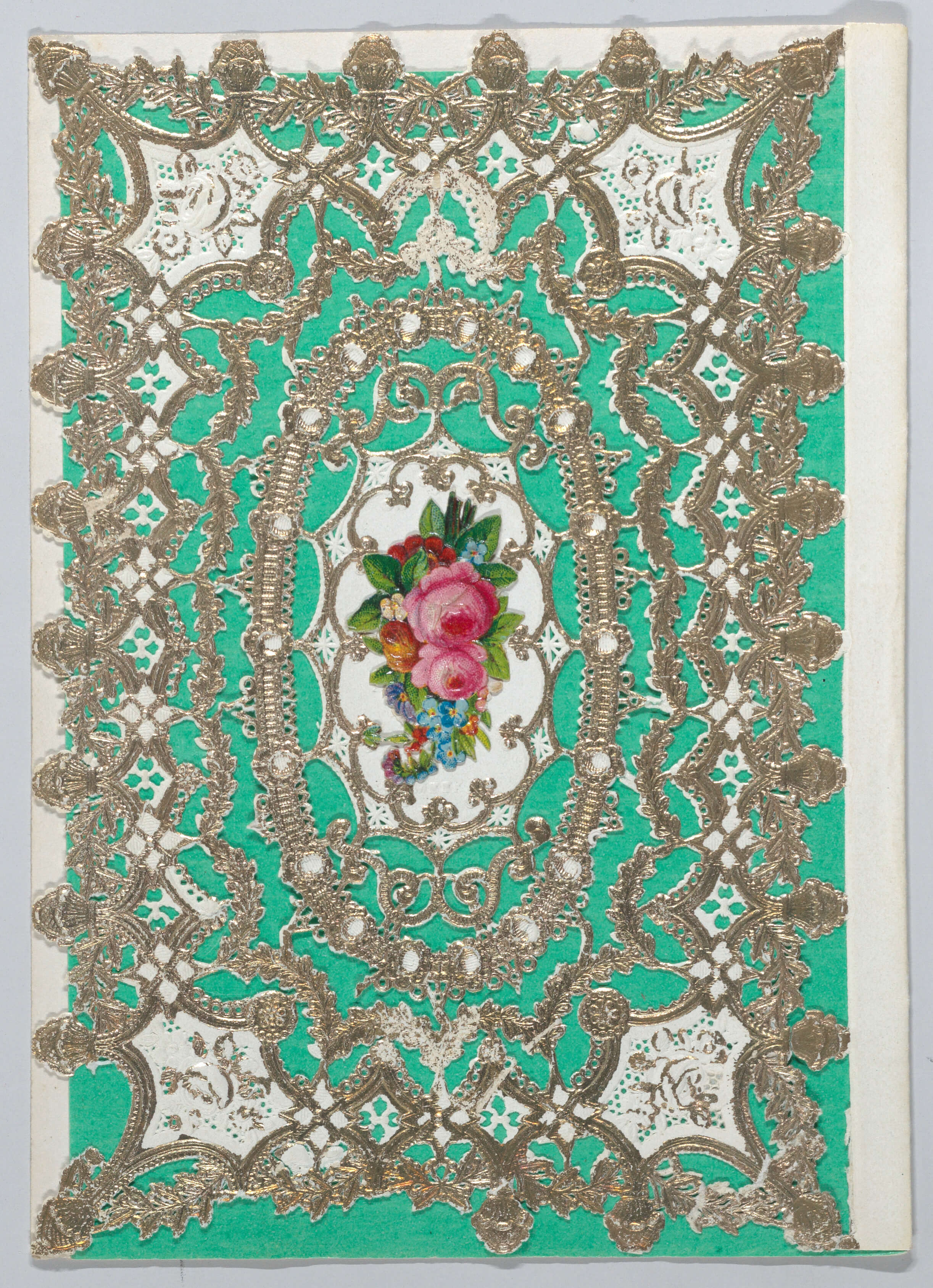 Esther Howland’s valentines were characterized by lace, florals, and romantic images. While some of her designs were quite expensive, she also offered a variety of affordable options costing around five cents. Photos courtesy of The Metropolitan Museum of Art.

During the gilded age, Valentine’s Day was immensely popular among wealthy, upper-class Americans. The Fricks, like many of their contemporaries, participated in Valentine’s Day by exchanging valentines. Examples of valentines—both handmade and commercially produced—survive in the family archive collections of both Adelaide Frick and her daughter, Helen. Valentine’s Day parties were also fashionable during this period, and we know of at least one Valentine’s Day celebration thrown by Helen and Childs Frick “for the family.” In a recollection of the event, Childs described how he and Helen “cut out a great many hearts” and strung them around the dining room chandelier. 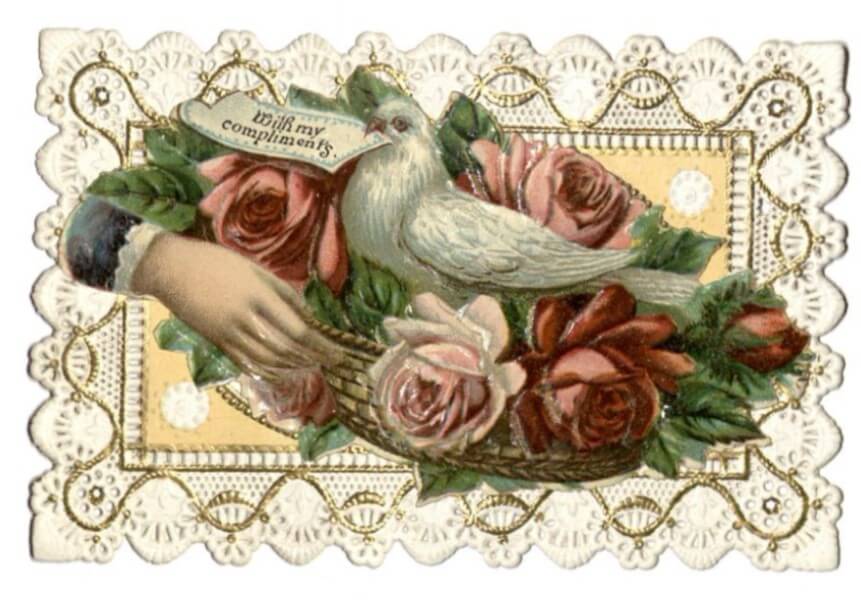 A valentine, signed on the back “C and M,” from the Helen's papers. Photo courtesy of the Frick Collection/Frick Art Reference Library Archives. 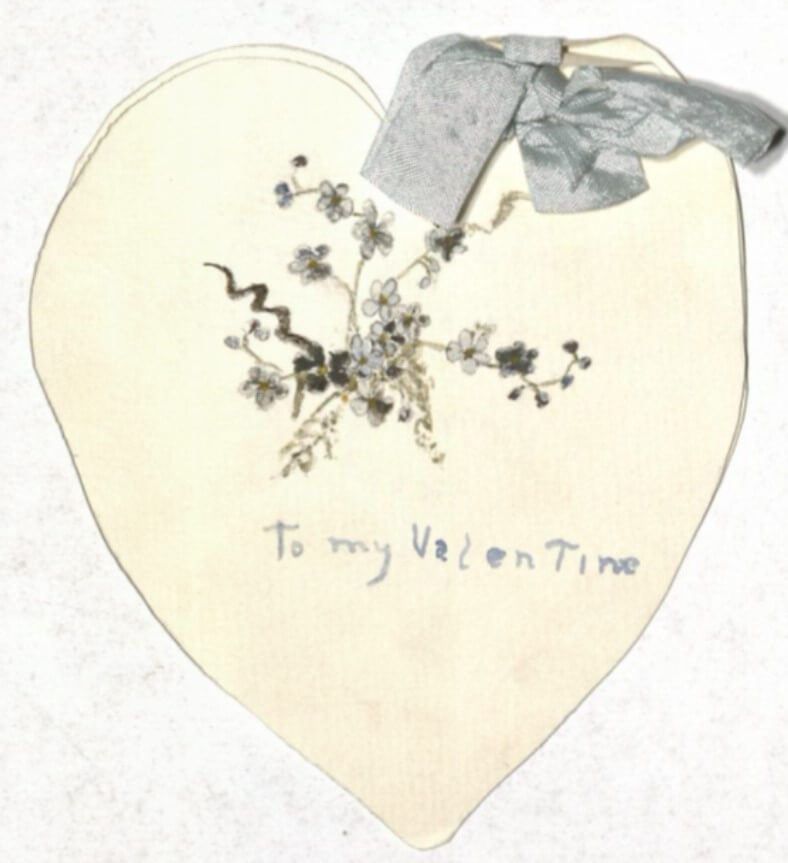 You can learn more about love in the gilded age, including the celebration of Valentine’s Day, during this season's special, themed tour of Clayton, My Dearest: Love & Courtship in the Gilded Age. 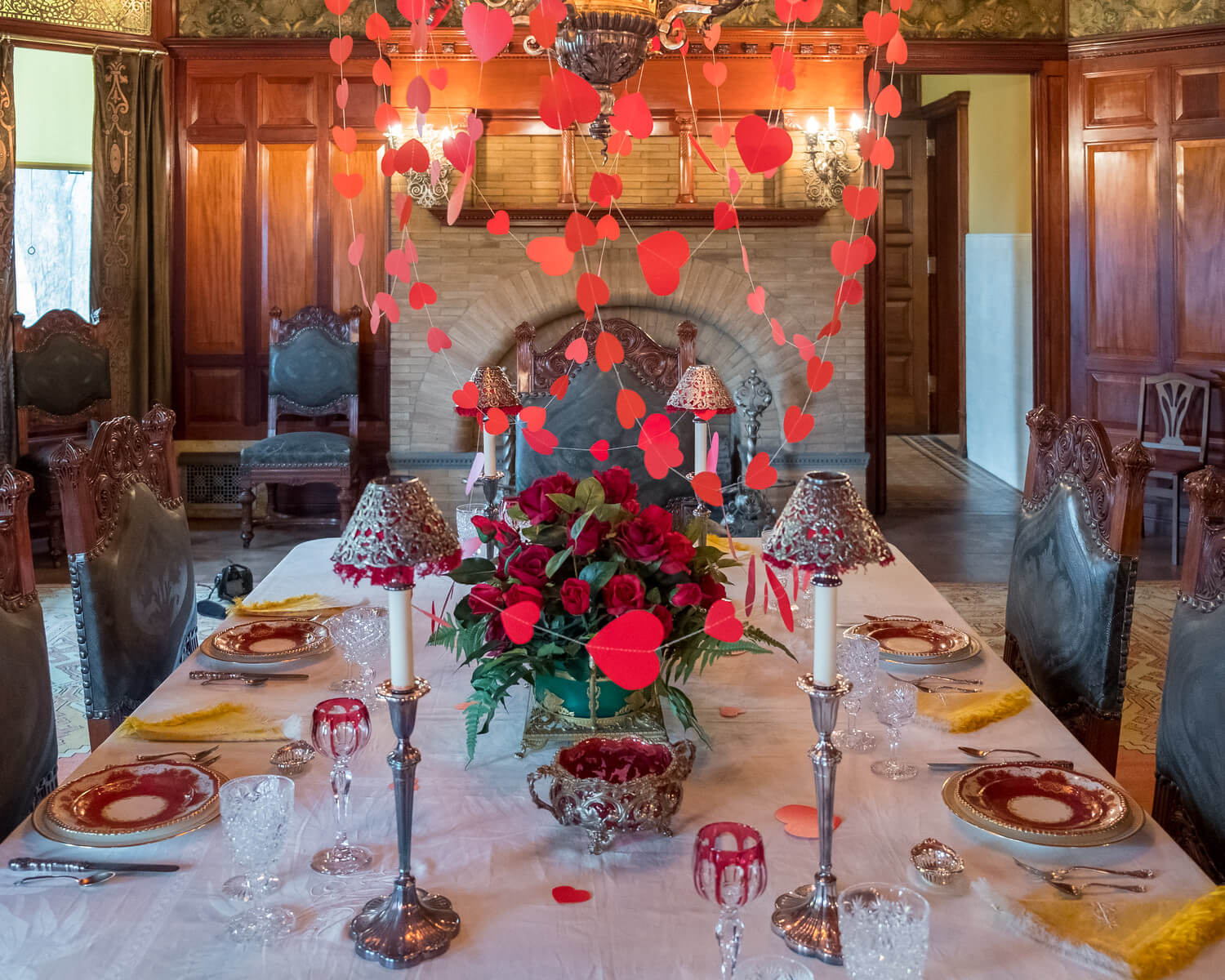 Decorations inspired by archival descriptions of Childs' and Helen's Valentine's Day party in the Clayton dining room as part of the My Dearest tour, 2020. 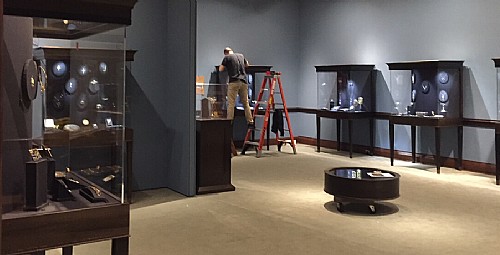 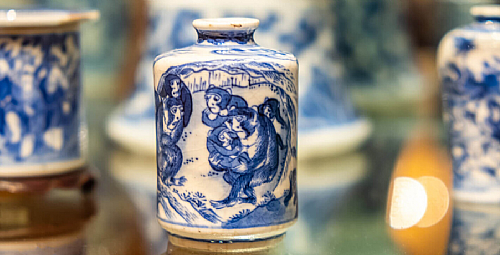 Previous Story: The Shape of Things: A Brief Journey through Maker & Muse
Next Story: Behind the Scenes: The Making of Maker & Muse at the Frick