In this week’s blog post, Kim Cady, Assistant Curator of the Car and Carriage Museum, tells us about the origins, development, and popularity of coaching as a sport. She researched the topic to develop the museum’s current exhibition The Hunt for a Seat: Sporting Carriages in the Early Twentieth Century. If you’re intrigued, stop by the Car and Carriage Museum to see the show, and make sure to also visit A Sporting Vision: The Paul Mellon Collection of British Sporting Art at The Frick Art Museum for scenes of coaching adventures in 19th-century England. 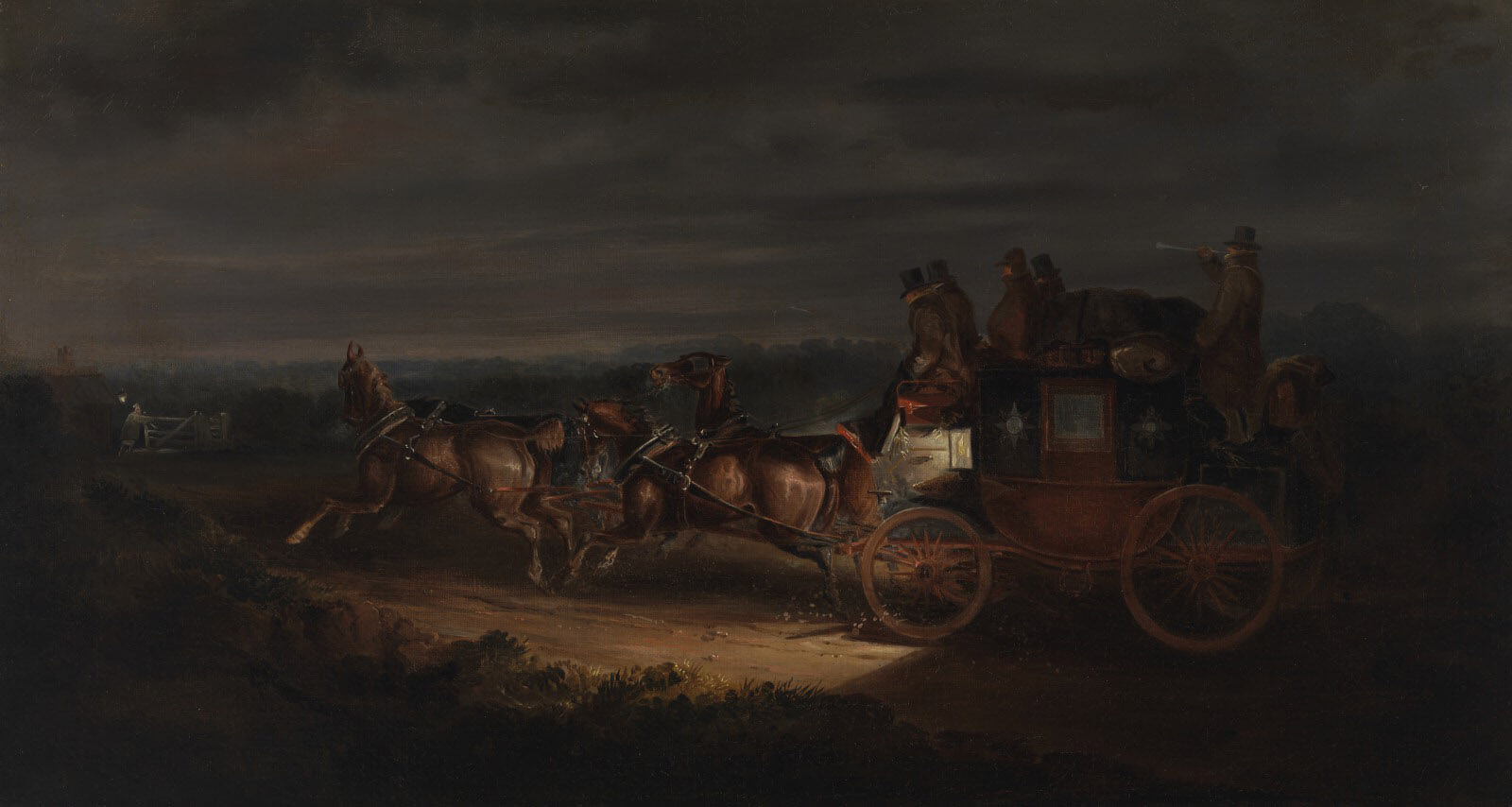 Inspired by the English mail runs of the 18th and 19th centuries, wealthy Englishmen and women began to take up coaching as both a social and leisure activity and a competitive sport (Kintrea, 1967). Beginning in 1784, with the London to Bristol route, mail coaches kept strict delivery schedules (Seabrook, 1965, p. 112) so much so that “people set their clocks to the sound of the mail-coach horn” (Kintrea, 1967). As the mail delivery network developed, so did the infrastructure to support long-distance travel, with a proliferation of inns for rests, meals, and changing teams of horses. 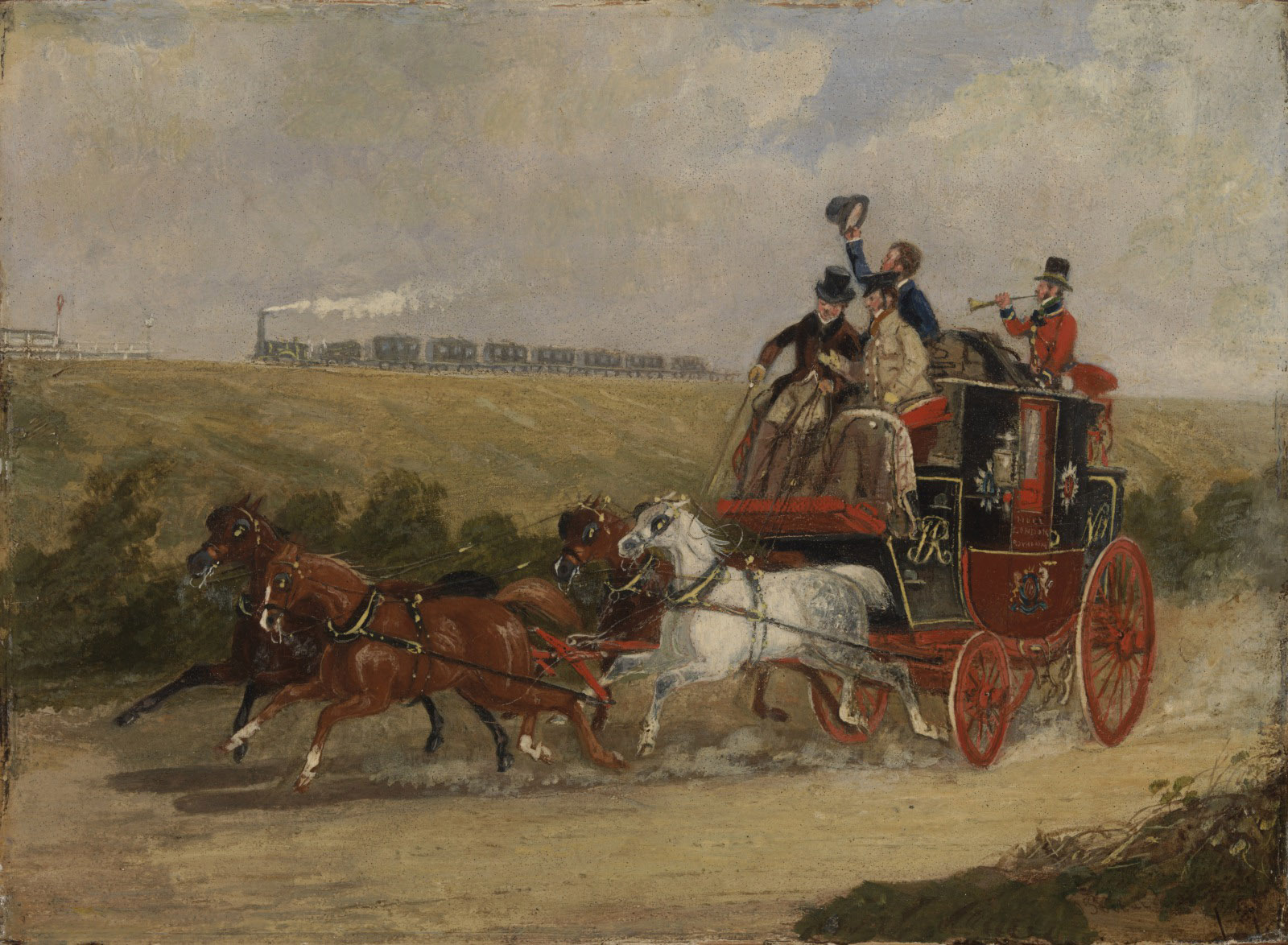 As railroads took control of mail delivery in the 1830s (Kintrea, 1967), country gentlemen bought up the out of service coaches to use for pleasure driving. These young men developed four-in-hand teams which raced against each other as well as the old recorded times set by the mail coaches (Kintrea, 1967).  Although these coaches generally had a maximum speed of twelve miles per hour, not being confined to the time schedules imposed by train travel provided a sense of independence for the driver and their passengers as they sat atop the open road coach (Kintrea, 1967). 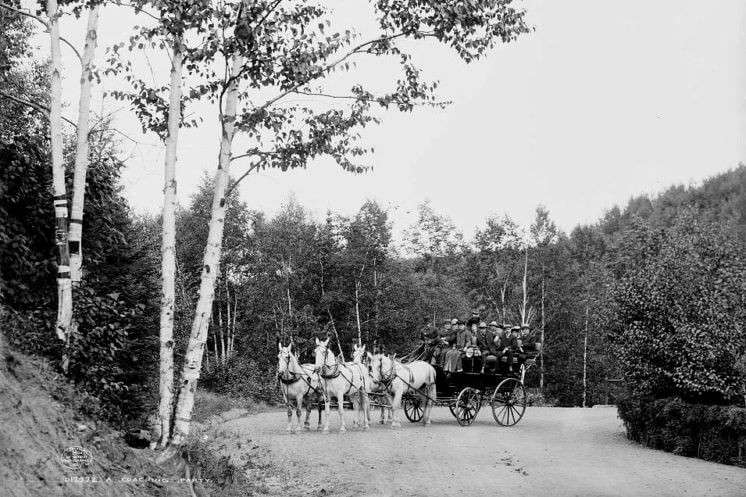 As coaching gained popularity as a sport, road coaches and drags, carriages similar to the mail coaches, became commonplace on the roadways. A road coach is a style of sporting carriage that is horsed and driven by its owner. Owner/drivers were responsible for the maintenance of his or her coach as well as stabling and caring for their horses. In addition to the ten passengers the coach could hold it also had accommodations at the rear for two footmen—paid staff along on the journey to assist passengers on and off of the coach as well as maintain the team of horses when the whip stepped away from the coach. Adventurous and well-dressed passengers accompanied the whip, or coach driver, on these competitive drives over rudimentary roads in a carriage that offered little comfort. 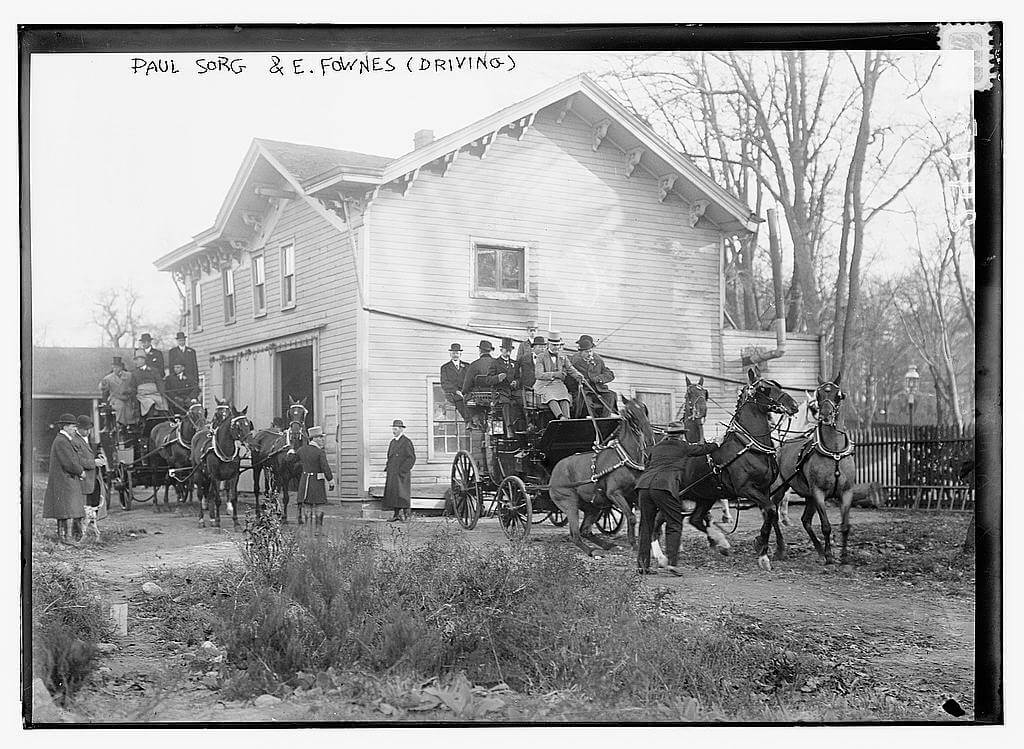 As the sport of coaching lost its luster in England, it was flourishing among the leisure class in America (Seabrook, 1965, p. 114). The economic boom following the Civil War allowed more free time for newly wealthy industrialists. Men from east-coast cities established coaching clubs after receiving expert training from former mail coach whips in England (Seabrook, 1965, p. 114).

Coaching was not limited, however, to men. Women's clubs allowed female whips to learn the skills necessary for driving a four-in-hand team (Owens, 2018). After mastering their skills these ladies would demonstrate their abilities at their Newport summer estates, where coaching became a prominent feature of the summer social scene (Owens, 2018). In the beginning, the coaching clubs merely drove their teams to races, like those held at Jerome Park (Kintrea, 1967), but soon developed routes comparable to those in England for timed runs (Bell, 2017; Kintrea, 1967). 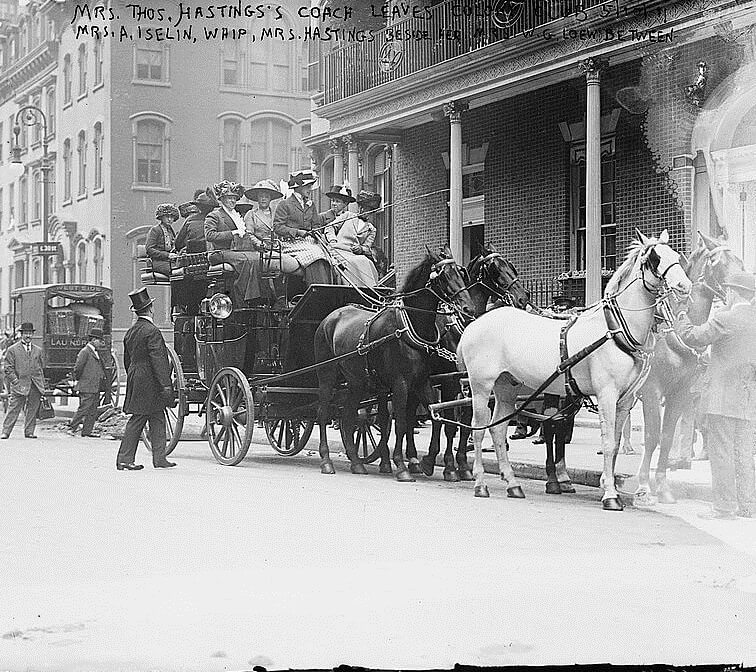 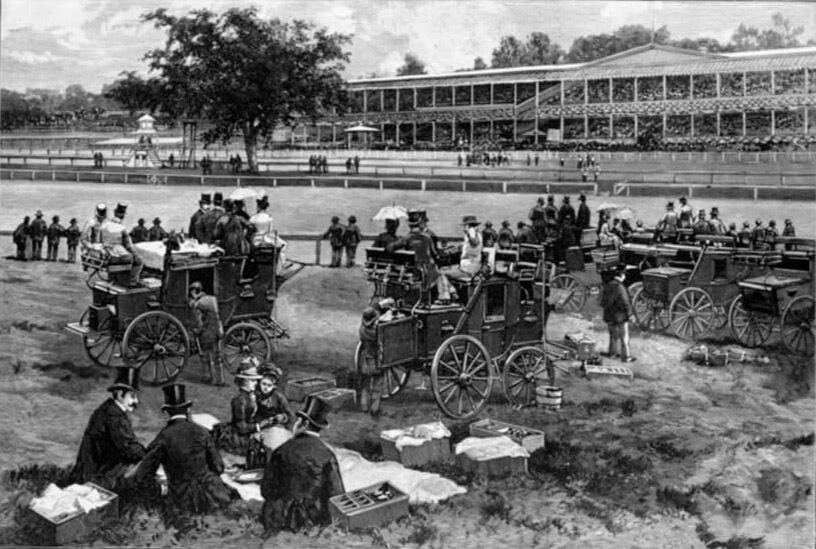 The Coaching Club of New York, led by Colonel Delancey Kane, created America’s first public run in the Tally Ho in 1876 (Bell, 2017). A bright yellow road coach, the Tally Ho traveled from the Brunswick Hotel in New York City to Pelham Manor (Bell, 2017), about a twenty-mile trip. In addition to the Tally Ho, the New York Coaching Club also ran the Pioneer (Kintrea, 1967). Both coaches have been preserved and can be found at The Long Island Museum and at The Breakers Stables & Carriage House in Newport, respectively.

In addition to these drives, the coaching clubs held annual parades down Fifth Avenue and through Central Park in New York City (Kintrea, 1967; Owens, 2018). These parades served as the closing ceremony of the New York social season (Owens, 2018). The parades were an opportunity for the drivers and passengers to display their coaches, teams, and finery to each other, while also providing a spectacle for onlookers (Owens, 2018). Coaching parades came to an end in 1907, however, as the popularity of the automobile began to increase (Kintrea, 1967).

Seeing the negative effects—congestion and noise—the automobile was having on coaching in America, Alfred Vanderbilt, one of the best-known American whips, became inspired to run his coach Venture in England, where he thought the drives would be much more enjoyable. England still offered miles of open road and easily accessible public houses suitable for changing teams and relaxed stops. But the First World War would put an end to the pleasures of coaching in the English countryside for Vanderbilt, who was killed in the sinking of the RMS Lusitania in 1915 (Kintrea, 1967). 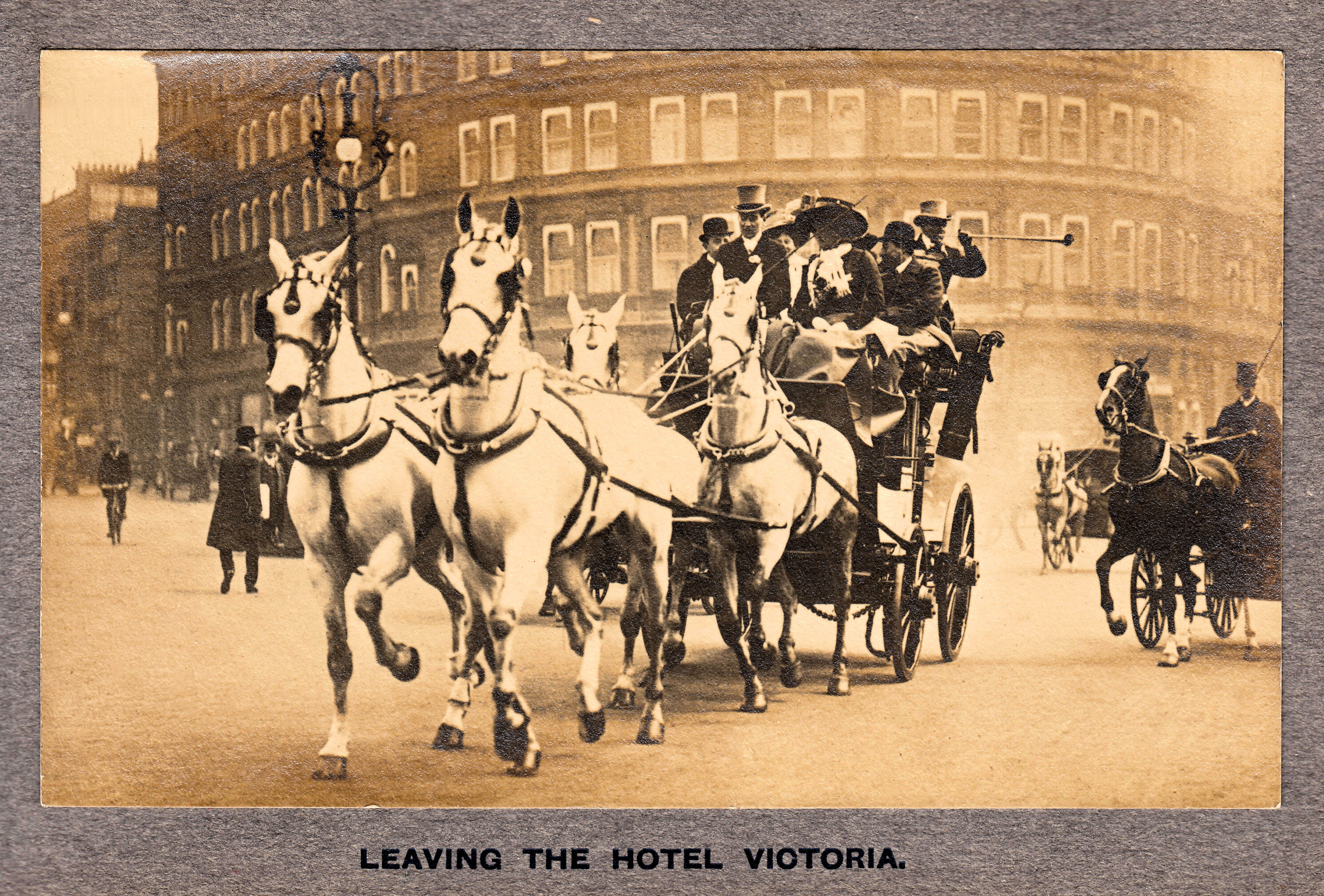