In connection with our current presentation of Isabelle de Borchgrave: Fashioning Art from Paper, we are presenting a series of stories on a variety of exhibition-related topics. This installment features a series of photographs and discussion by Sarah Hall, chief curator, director of collections, on the development of Borchgrave's Charlotte Marguerite de Montmorency, Princess of Condé, the work commissioned by The Frick Pittsburgh.
The most recently created artwork in our current retrospective exhibition of Belgian artist Isabelle de Borchgrave’s work is an imposing rendition of Baroque costuming derived from the Frick’s iconic Portrait of Charlotte Marguerite de Montmorency, Princess of Condé. From the earliest discussions related to the exhibition, we identified this portrait as being the perfect inspiration for an original, commissioned new work by de Borchgrave. 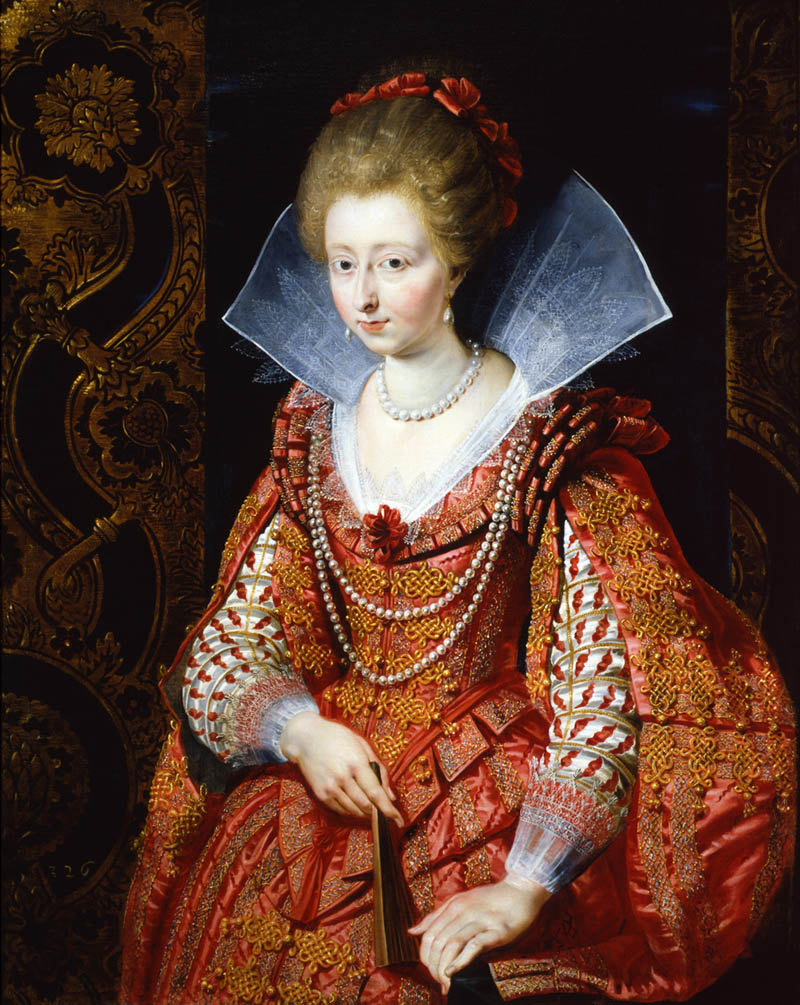 
When I traveled to Brussels in September 2015 as part of the organizational team planning the exhibition, I took along images of the Frick’s princess to share. The details of the commission were finalized in October 2016.

Pauline de Borchgrave, Isabelle’s daughter, supplied us with photographs throughout the creation of the Princess’s gown. We also had a professional photographer visit the studio to take a series of photos of the final stages of assembly. 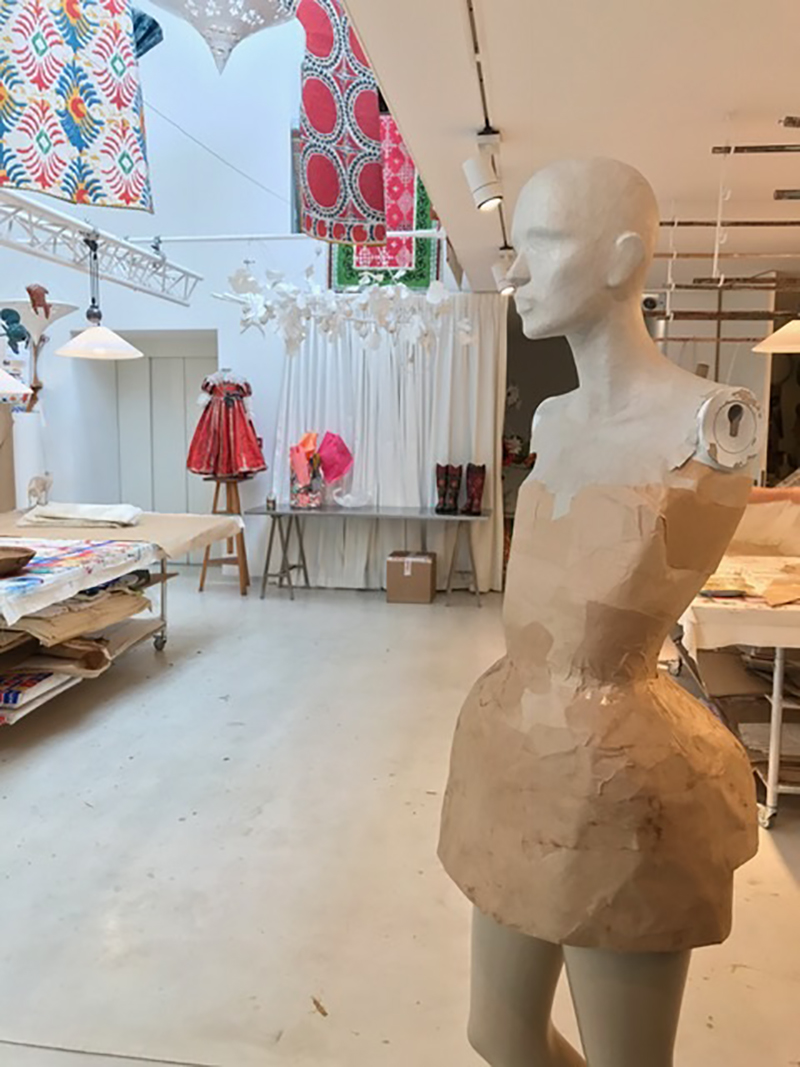 In this photograph taken in the studio early in the process you can see how de Borchgrave is building out the form of the purchased mannequin to support the correct shape of the skirts—very much like the panniers that women wore under skirts to create the correct silhouette. Part of the commission process included discussing the approach to the dress—sometimes the dresses de Borchgrave creates are mounted on full figure mannequins, sometimes they are mounted on dress forms, and other times she creates wire armatures or sculptural supports. The Princess’s dress was most similar to the Medici series that de Borchgrave created in 2006-7, and much of the research she did into historic dress styles for that series was put to use for this commission. A full-figure mannequin was chosen for this work because it allows for the creation of a wig, hair ornaments, and earrings that would enhance the sense that the princess in the painting had become fully three-dimensional. 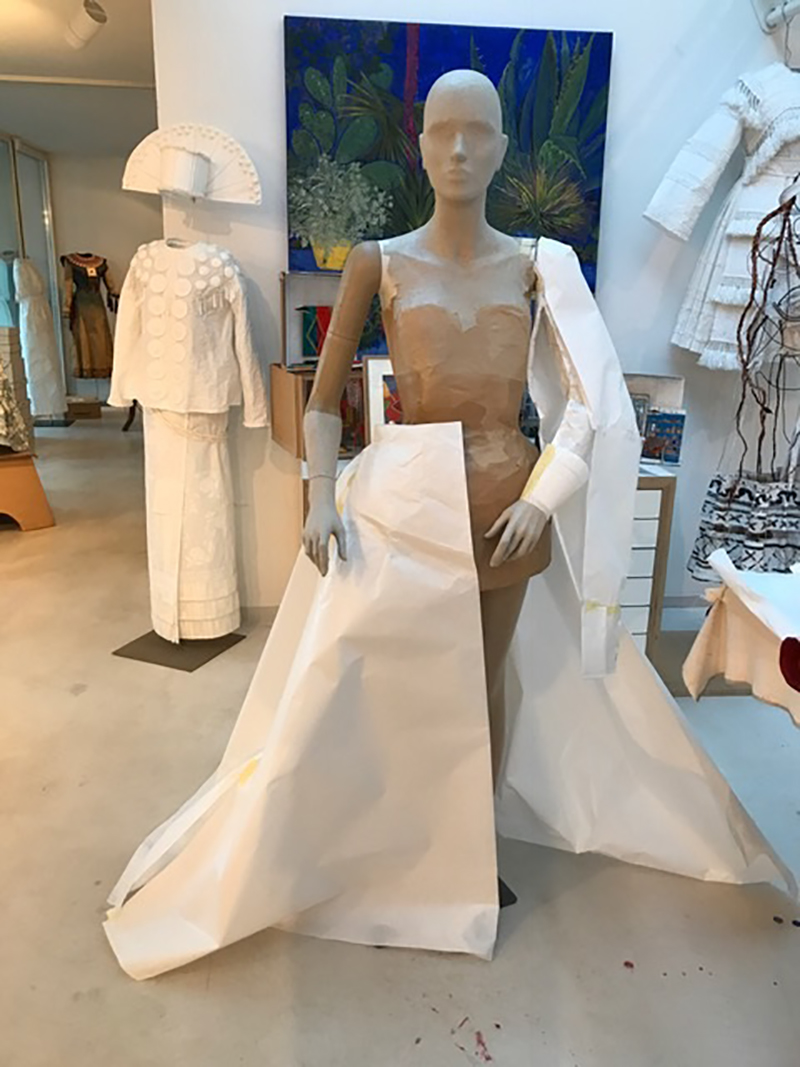 De Borchgrave’s studio is somewhat like a Renaissance studio with various members helping with specific tasks. During my visit to the studio, de Borchgrave referred to the plain white paper renditions of garments that were sprinkled around her studio as sketches, and indeed working with plain paper to create a prototype helps de Borchgrave and her team of assistants to determine the specific shape of the dress and create the pattern. Once the “sketch” is complete, studio assistants can help with specialized tasks—like painting the paper, cutting patterns, or creating the decorative borders or trim pieces. The Frick’s dress took about seven weeks to complete.

A close-up of the working prototype of the princess’s dress showing the slashed sleeve typical of early 17th-century fashion, and with sketching in place to indicate lace on the cuff. 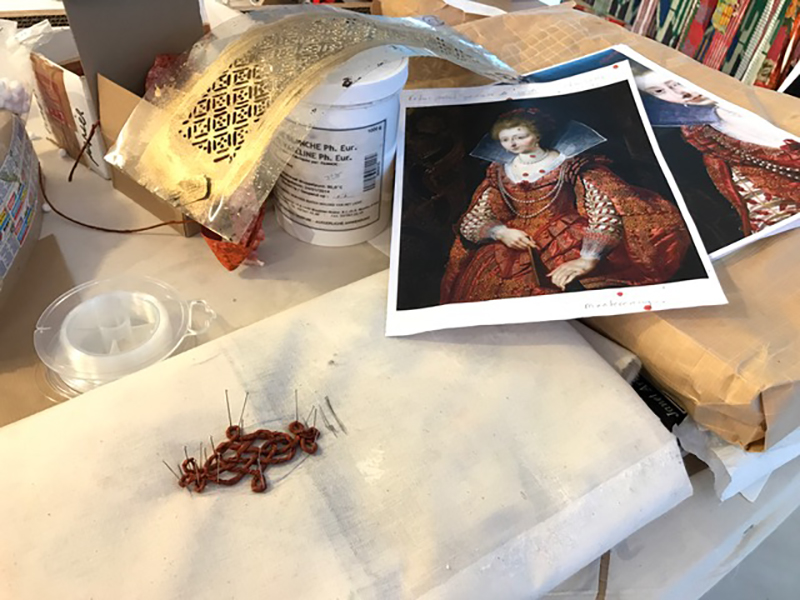 This photograph of the worktable shows reference photos of the Rubens portrait as well as one of the elaborate frog closures that adorn the princess’s gown. The closures are created from twisted paper that is pinned and glued into shape. Later they will be painted gold. In the background the stencil for the gold lace is visible. 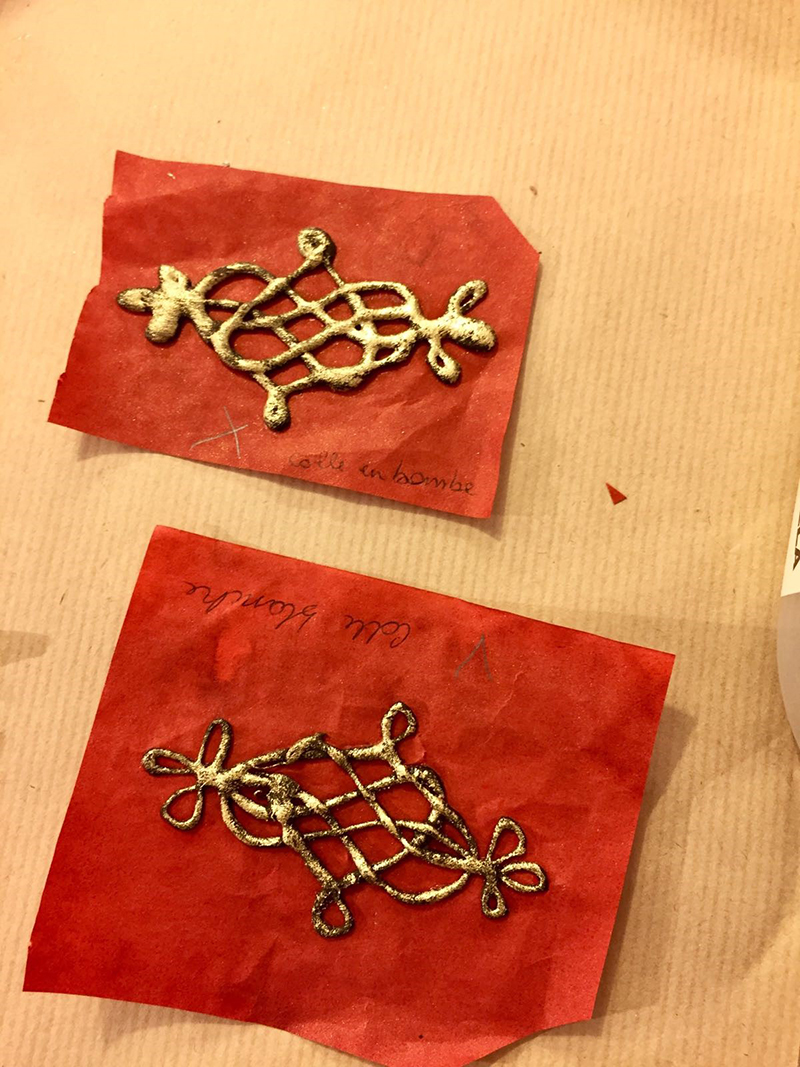 The frogs after receiving a coat of gold paint. 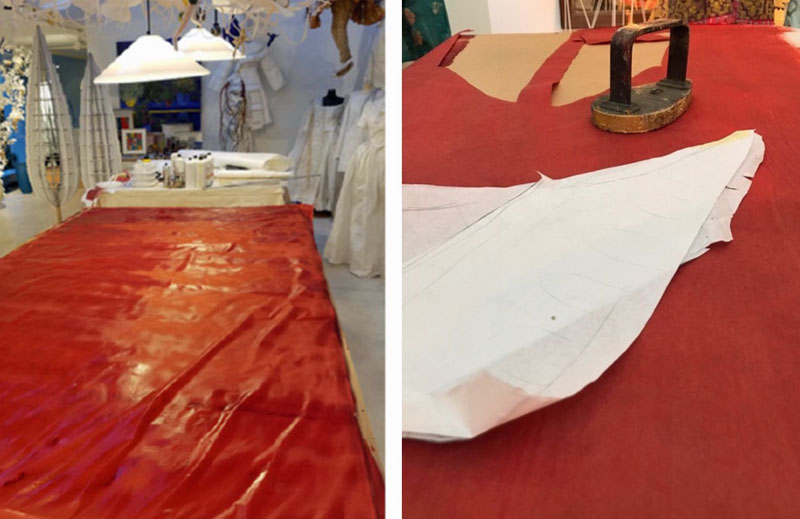 The majority of de Borchgrave’s sculptures of costume are constructed from white paper that has been painted to resemble fabric—here the vivid red of the princess’s silk satin gown. In the image at left, you get a sense of how tricky it would be to carefully handle large quantities of wet paper. De Borchgrave’s studio assistants who visited Pittsburgh told me that one of the trickiest parts of the process is simply painting and drying the paper, since the wet paper is heavy and has a tendency to break and tear.  At right, the paper has dried  and the sleeve pieces are being cut. 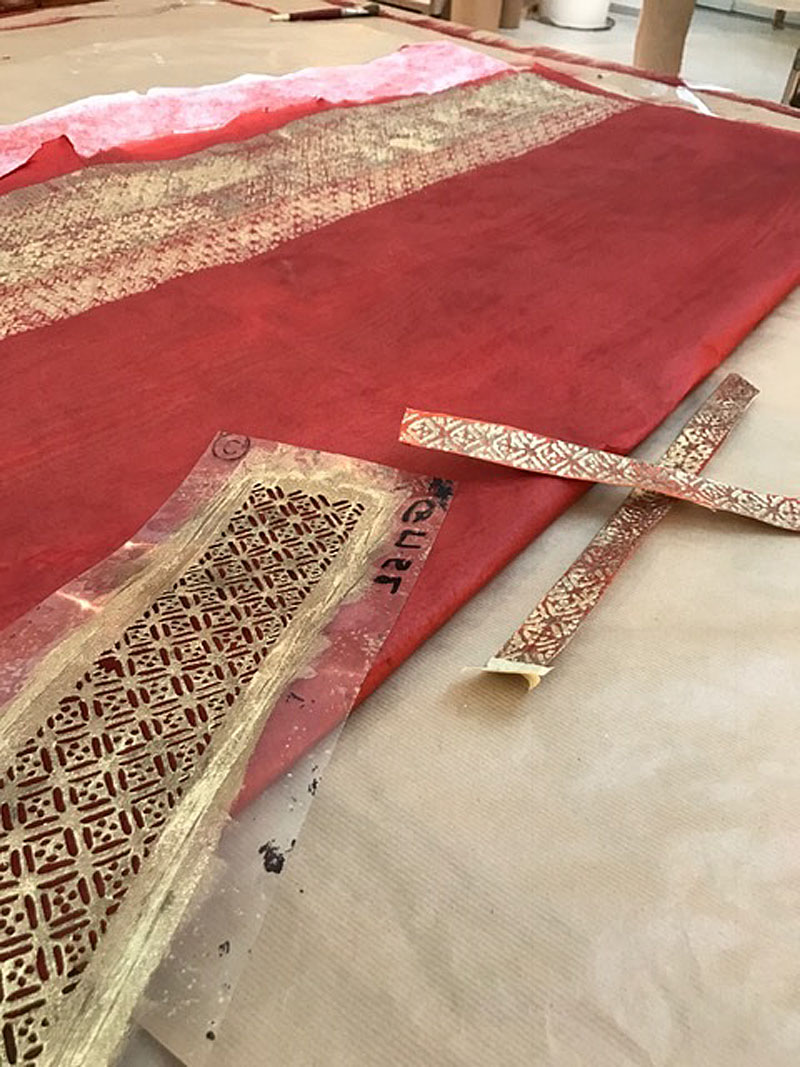 Here strips of gold lace are being created using the stencil at left. 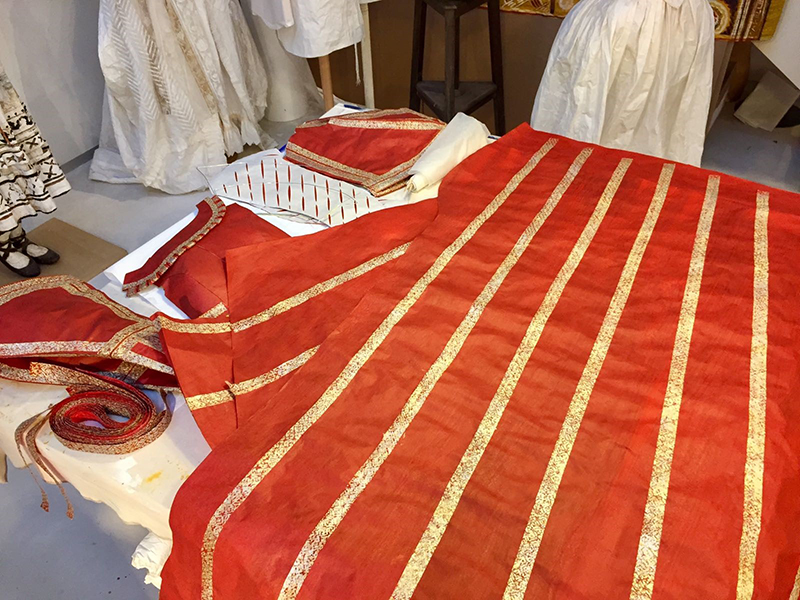 The cut pattern pieces, trimmed and ready for assembly. 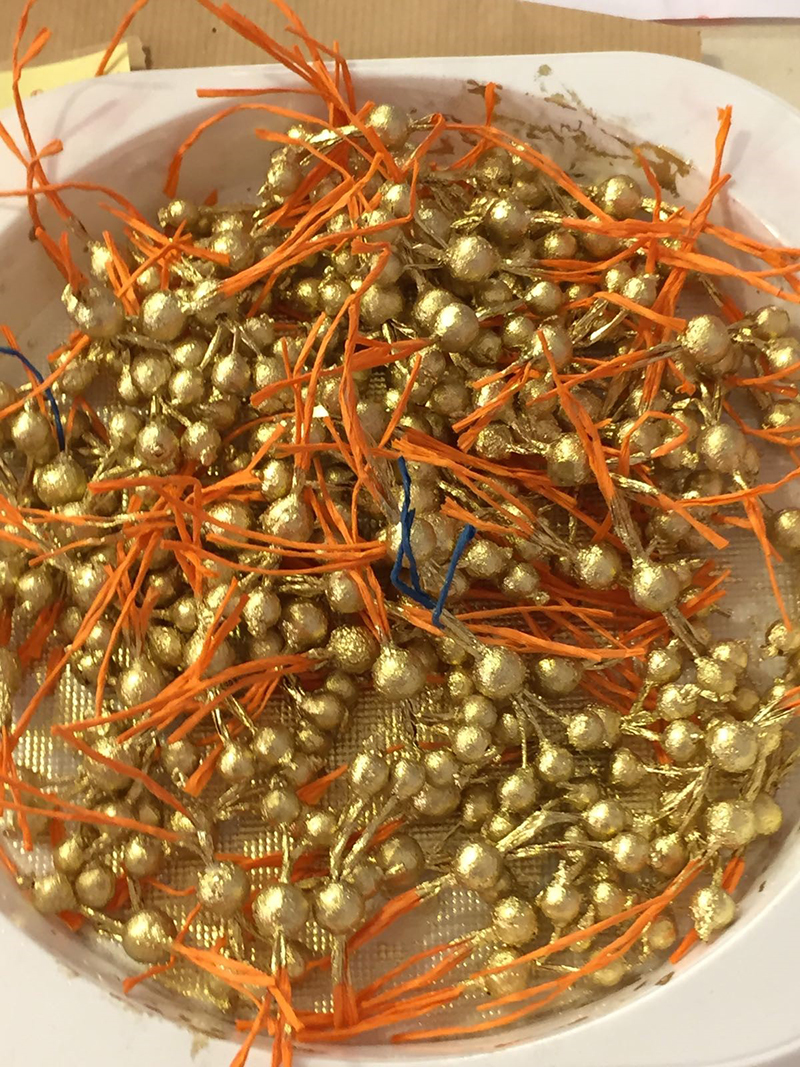 The gown is covered with hundreds of gold beads created from paper. 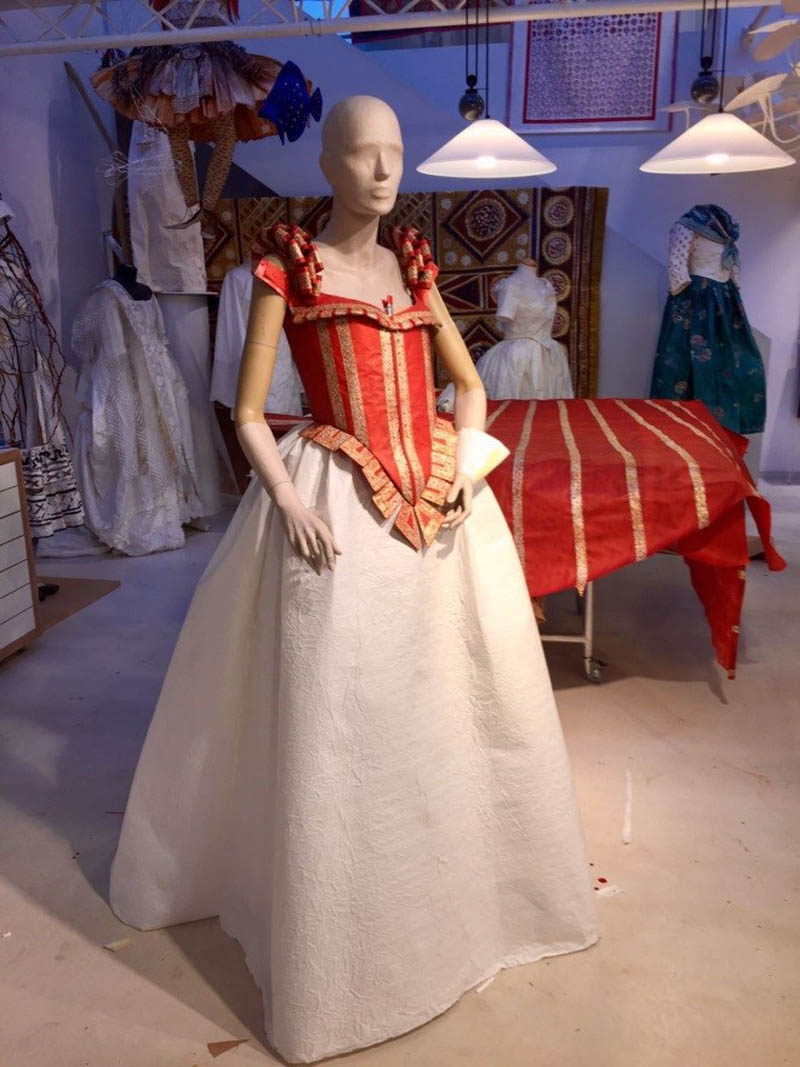 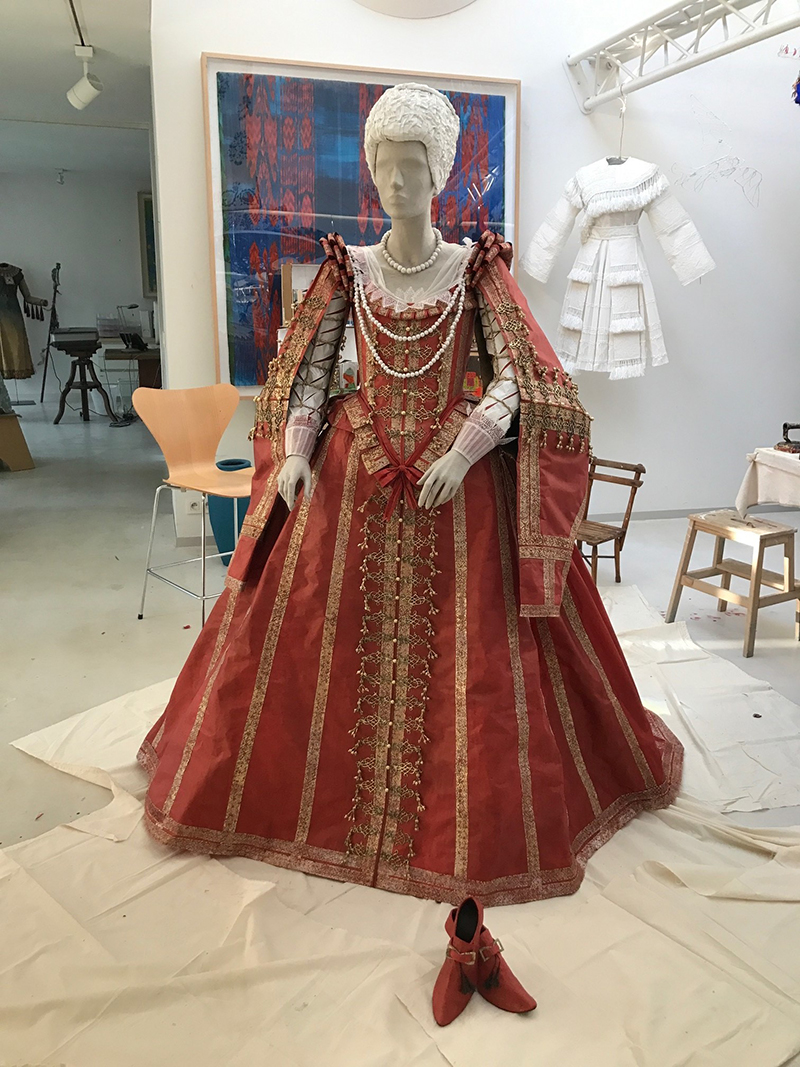 Nearly complete in the Brussels studio—she’s missing her hair ornament, earrings, and her shoes haven’t been painted yet. 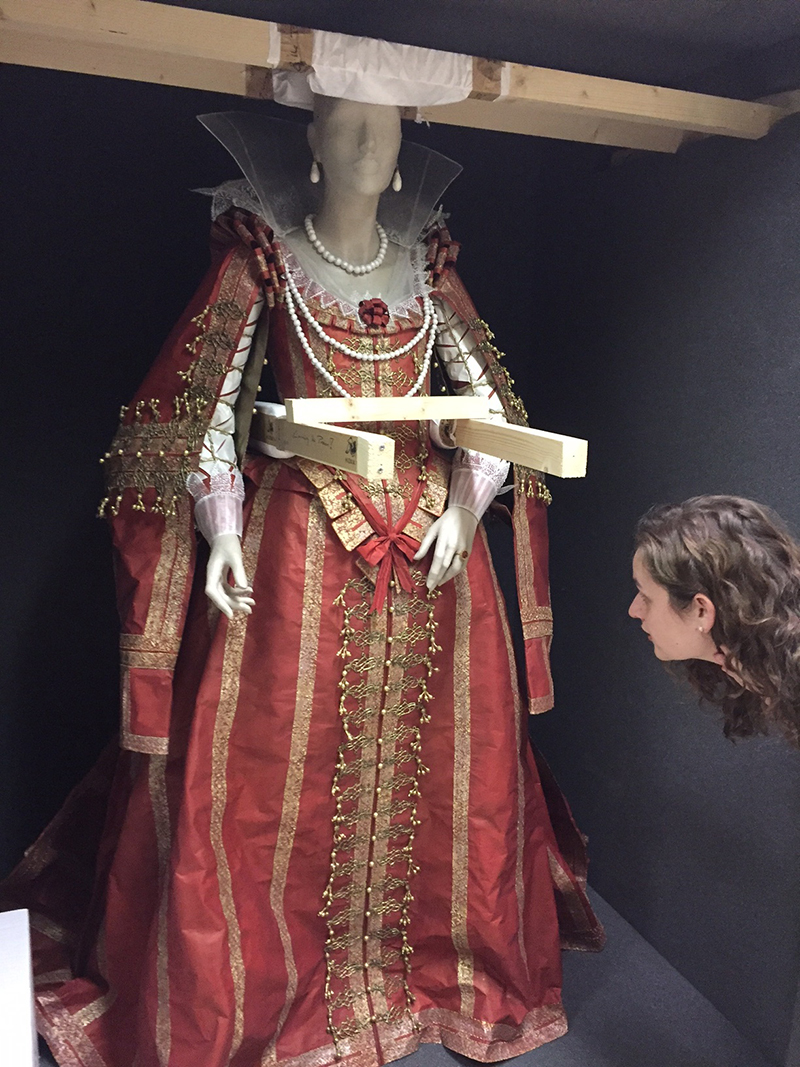 How does a princess travel? Her shoes, wig, and fan were boxed and secured at the bottom left of this large wooden crate. The sculpture itself is stabilized by wooden braces at the top and under the arms.

When the sculpture arrived at the Frick in spring 2017, we displayed it for about 6 months before it went on its national tour. 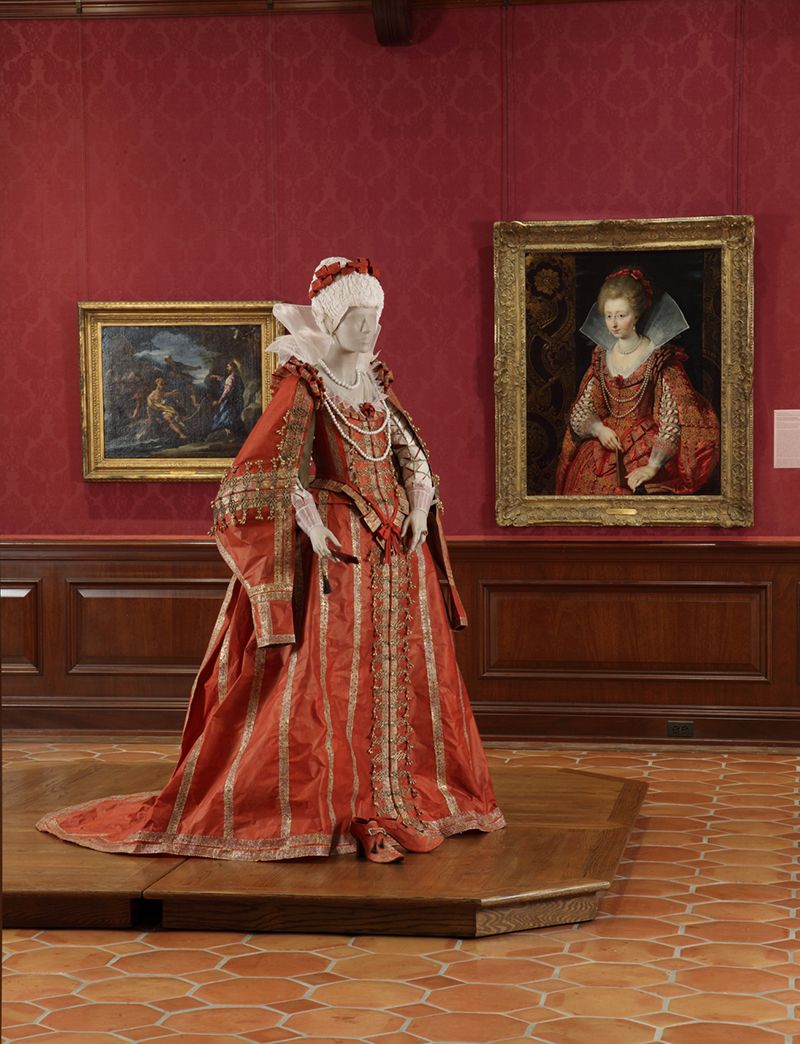 In The Frick Art Museum, after first arriving in Pittsburgh.


About the painting and the princess

Rubens’ distinctive luminous skin tones, glowing colors, gorgeously rendered satin, pearls, and gold thread, make this portrait a tour de force of painting technique. Underneath the sumptuous finery is the recently married 16-year-old Princess of Condé, Charlotte Marguerite de Montmorency (1594–1650). As a young lady serving in the court of Marie de’ Medici and King Henri IV, Charlotte caught the King’s eye. According to historical anecdote, she was quickly married and dispatched to Brussels with her husband to escape the King’s unwelcome attentions. Rubens likely painted this portrait during her stay at the archducal court in Brussels. After the King’s assassination in 1610, Charlotte and her husband  were able to return to France. The Princess’s costume reflects typical aristocratic fashion in the early 1600s, with a tight, fitted bodice, full skirt, lavish ornamentation, slashed sleeves, wide lace collar, and use of multiple fabrics and textures. Capturing the rich details and  Baroque ornamentation on display in Rubens’ portrait, de Borchgrave and her team interpreted the variety of textures and qualities of the ribbons, pearls, laces, and silk satin of the sumptuous gown. De Borchgrave also emulated the Princess’s transparent starched linen collar shaped with tiny tucks and supported by a separate lace-covered rebato, or stiff flaring collar, the original of which would have been made of silk-covered wire.