Part One: The Inaugural Ball

In the late 1890s and early 1900s, Henry Clay Frick travelled with his family to Washington D.C. to mark social occasions with presidents William McKinley and Theodore Roosevelt. He also entertained both men in Pittsburgh. These were high profile celebrations of civic hospitality focused on the head of state, and Frick’s involvement was a conspicuous declaration of his wealth, power, and influence.

A Ball with William McKinley

Henry Clay Frick attended the 1897 inauguration of President William McKinley after investing considerable energy and money into his electoral campaign. While the Fricks left little documentation beyond initial plans, these inaugural events were well-documented. That allows us to piece together their experiences.

Until 1933, when the 20th Amendment changed executive office terms to begin and end on the 20th of January, regular presidential inaugurations were held on the 4th of March. Judging by Frick’s correspondence, the workaholic steelman may have been a reluctant attendee at the nation’s biggest party. In a letter to a business colleague in late February 1897, Frick explained: “My wife, never having seen a President inaugurated, is anxious to do so.” A few days later, a seemingly aggrieved Frick wrote: “I suppose I will have to have tickets for the inauguration Ball” to Lieutenant C.A. Stone, Carnegie Company representative in Washington DC. Upon receiving Frick’s check for $104, Stone obtained four seats for the Fricks in the Senate Gallery for the Vice President Garret Hobart's swearing-in ceremony and for the ball and supper that evening. 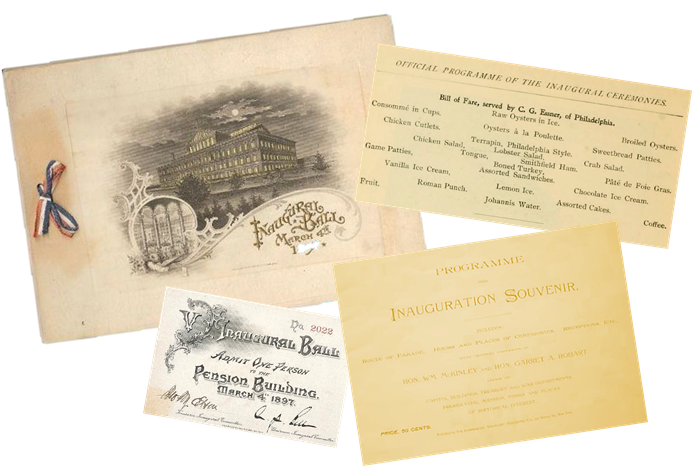 Paper souvenirs received by the Fricks in 1897 would have included official programs and non-transferable tickets to events.
Images from Library of Congress and National Museum of American History collections.

Frick chartered a Pullman palace train car for the trip. He made logistical arrangements for the rail journey directly with fellow Pittsburgher and Superintendent of the Pennsylvania Railroad Robert Pitcairn. Travel in luxurious rail cars epitomized prestige and status just as private jets do today. Frick reserved a car named Haslemere that was often used by Washington D.C. politicos. The Fricks planned to reside in this hotel car while visiting Washington from March 2–5 1897, then travel further on Haslemere to Florida. There they would join the annual exodus of wealthy families escaping dreary Pittsburgh for points south at this time of year.

But first, the inauguration. 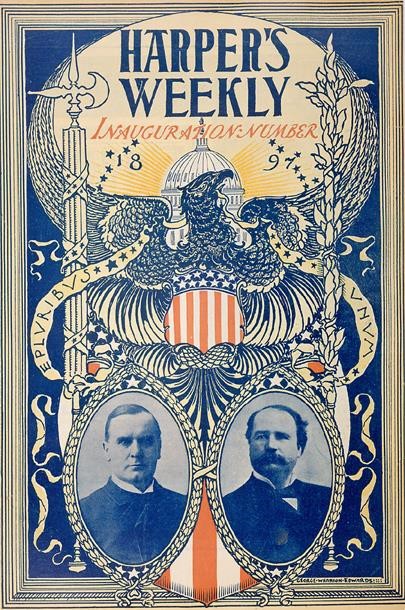 Henry Clay Frick and wife Adelaide traveled with their 9-year-old daughter Helen, who was under the supervision of her new Swiss governess Marika Ogiz. Their 14-year-old son Childs was apparently not included in the Haslemere party, perhaps to avoid absence from classes at Shadyside Academy. Joining the Fricks on Haslemere were Mr. and Mrs. John G. Holmes. Holmes was a distinguished Pittsburgh banker married to the former Sue Horne, daughter of Pittsburgh department store founder Joseph Horne. There were plans for a larger party that seem not to have materialized. One of Mrs. Frick’s closest friends, Miss Mary Speer, was invited, but it is not clear if she joined the group. Similarly, Philander C. Knox, prominent Pittsburgh attorney and friend Frick was promoting for a McKinley Cabinet position, was invited but doesn’t appear to have joined the group. An invitation was extended to partner Andrew Carnegie, but he developed a cold that progressed into pleurisy, preventing him from traveling. That left a confirmed group of six to travel on Haslemere.

The McKinley entourage also travelled by rail, leaving Canton, Ohio for Washington, D.C. via Pittsburgh. The McKinleys occupied a private train car that exceeded the Haslemere for “chief luxury of the interior.” The car was paneled in solid white oak and featured an “old-fashioned” log fireplace and two “palatial“ bedroom apartments with private baths. It was described in the inaugural program as a “huge safety box” because of the security provided by its double steel framework, cushioned ceiling, and four thicknesses of white oak flooring. Pittsburgh turned out in the late evening of March 1, 1897 to catch a glimpse of the president-elect in this luxurious car known only as No. 38. The train pulled into Pittsburgh’s Union Station at 11:30 PM, passing thousands who had thronged the route even at that late hour, hoping to witness McKinley stepping out of his “safety box” to greet the admiring crowd. “They wanted to see McKinley. Everything was McKinley,” explained the Pittsburgh Press. “The cry was McKinley, McKinley! Long Live and Good Luck to McKinley!” 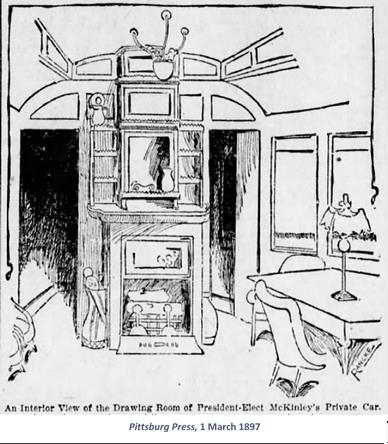 Ten-year-old John Robinson of Pittsburgh was excited to see the president-elect at Union Station, but he got pushed around the platform by the midnight crowds. John claimed that he jumped onto the presidential train to avoid being crushed when it pulled out of the station, and he didn’t have the courage to jump off as it gathered speed. About an hour later, the poorly clad stowaway was discovered, weeping, on the steps outside of a vestibule between two of the sleeper cars. John was hungry, half-frozen, and regretting his life’s choices. After being warmed and fed, the lad was removed from the train near Altoona for a journey back home to Pittsburgh. It is not known if, for his troubles, John ever did get to meet the president-elect. 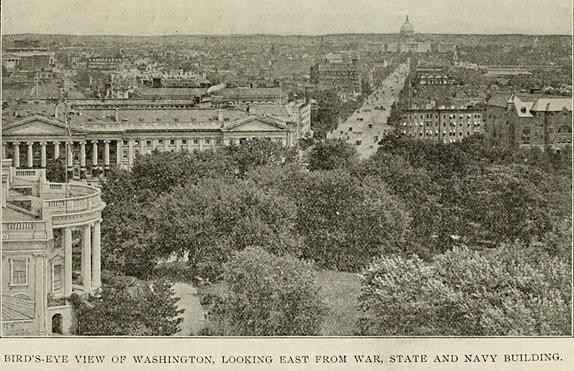 Rail traffic was heavy that week, so the Fricks planned to arrive in Washington, D.C. a full day before the inauguration. If they left the comfort of Haslemere to explore the city, they would have joined the estimated 200,000 visitors who plodded through the rain to see the capitol swathed in patriotic bunting.

Inauguration day dawned bright and crisp. The Frick party would have had an excellent view of the Vice-Presidential oath-taking in the Senate chamber. They would have then joined the procession outside to VIP seats on the Senate wing of the Capitol. The Fricks watched Chief Justice Fuller administer the oath of office to William McKinley from a slightly more distant vantage point as illustrated in Harper’s Weekly. 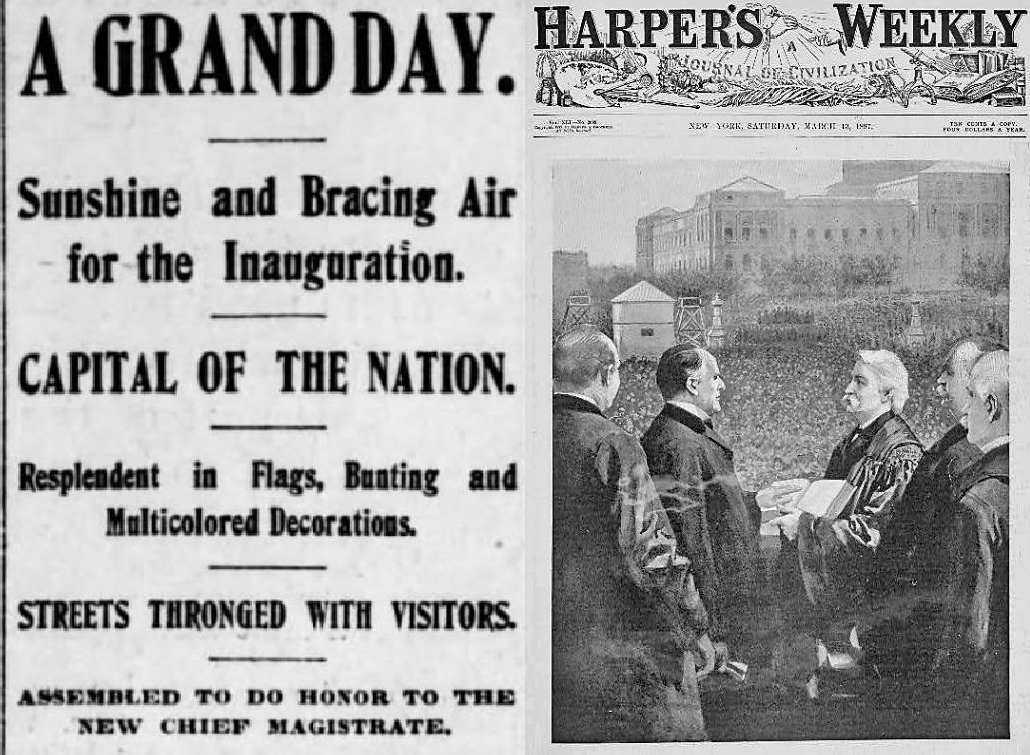 William McKinley was the last president to be inaugurated in the 19th century, and his was the first inauguration to be captured on film. McKinley watched his three-hour inaugural parade down Pennsylvania Avenue from a glass-enclosed reviewing stand erected in front of the White House, the first time such an enclosure was used by a president. We do not know where the Fricks watched the parade, but we do know that their Pittsburgh neighbors George and Marguerite Westinghouse hosted an enviable "window party" from the second floor of a business at Pennsylvania Avenue and Eleventh Street. The Westinghouses leased a suite specifically for parade-viewing, and newspaper accounts admired their seven windows patriotically draped with flags and flowers. The Westinghouses had recently moved into a grand home on nearby DuPont Circle that they would eventually buy.

The Fricks arrived at the Inaugural Ball sometime after 8 PM, when the doors opened at the Pension Building at Fifth and F Streets NW (now the National Building Museum). The Roman-inspired office complex had been constructed ten years earlier with Washington’s need for a grand space for social and political functions in mind. The inaugural program giddily described how the Great Hall embraced "an artistic combination of plants and flowers, the effect of which is heightened by the background of white and gold bunting, and the delicate rays of thousands of miniature electric lights." The interior balconies, promenades, and columns were wrapped in garlands and decorated with flags and other patriotic emblems. There was even a 12 x 5-foot flag display made up entirely of red, white, and blue electric lights over a gallery door. 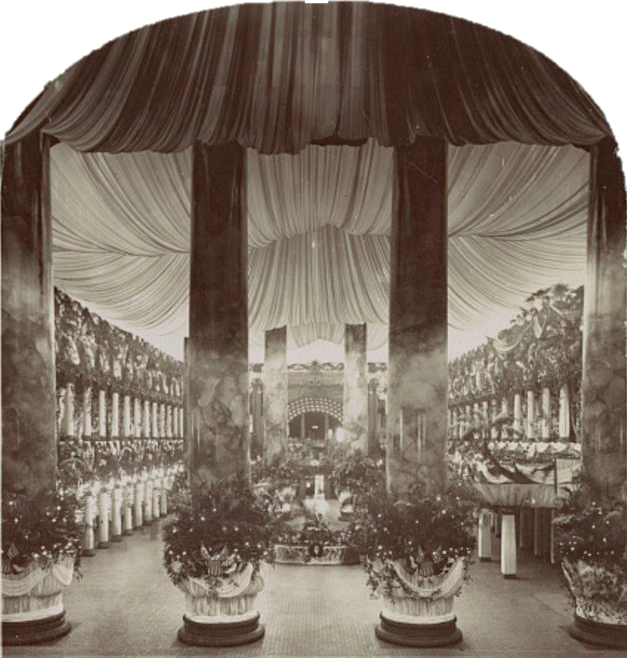 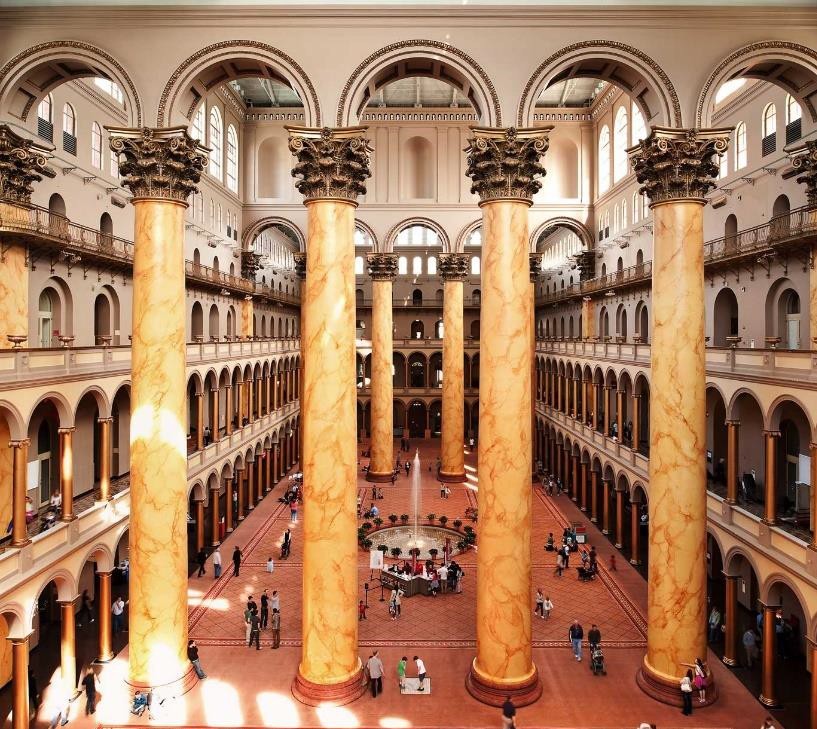 Music was furnished by Haley’s Washington Concert Band of 125 pieces and Victor Herbert’s 22nd Regimental Band of 65 pieces. Just a year later, Victor Herbert would become the principal conductor of the newly created Pittsburgh Symphony, a position he held until 1904. 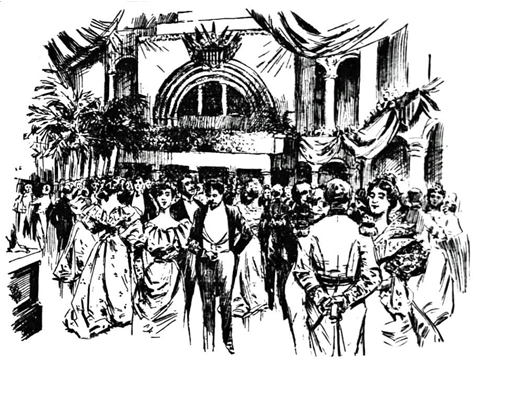 It may have been the President’s day, but the evening belonged to the ladies. The Washington Times advised the nation that "the beauty of the ballroom was enhanced by the magnificent toilettes of the ladies." 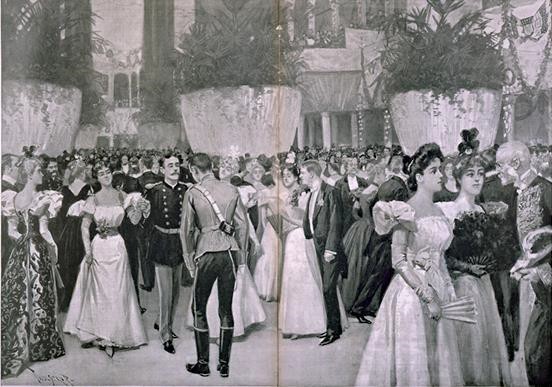 The presidential party arrived at 9:45 PM. Ida McKinley, the 50-year-old new First Lady, received praise for her elegant silver and white brocade gown lined with pale blue satin. She wore diamonds to fasten the lace, and her fan was embroidered in pearls. 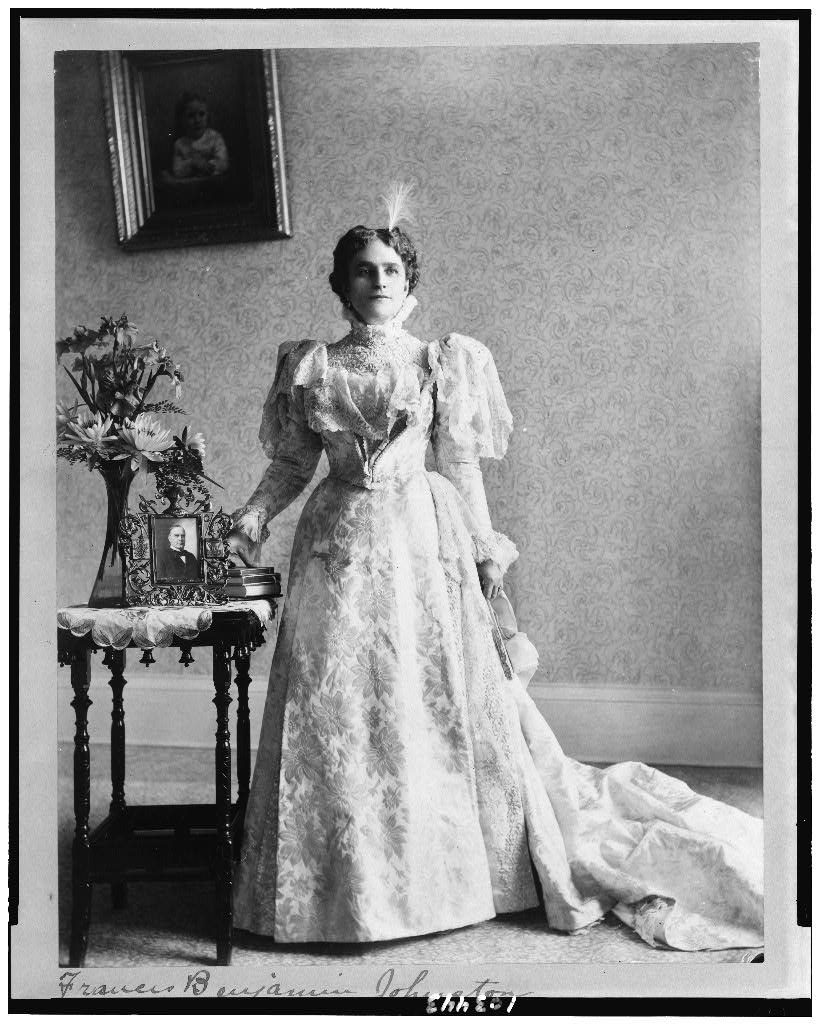 Unfortunately, we do not know what Mrs. Frick wore to the Inaugural Ball. But the Pittsburgh Post reported that at Pennsylvania Senator Quay’s house party "Mrs. Westinghouse wore white moire with handsome pearls."

The President and First Lady left the ball after only an hour or so, citing Mrs. McKinley’s exhaustion and fragile health. The inaugural festivities ended with fireworks from the foot of the Washington Monument. The next day, the business of governing the nation began.

Now that you've learned about the Fricks' trip to D.C., read part two to learn about President McKinley's visit to Pittsburgh.
Our Story 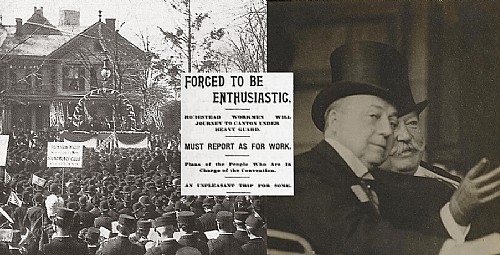 Henry Clay Frick: The Art of Politics and the Politics of Art 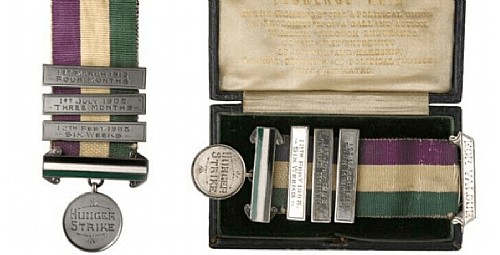 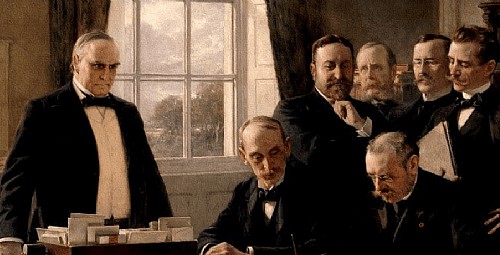 The Art of Politics and the Politics of Art: Part Two

Previous Story: Partying with the Presidents: Part Two
Next Story: The Fricks Take a Trip: Egypt