Kim Cady, Assistant Curator, Car and Carriage Museum, is our resident expert on women’s suffrage, having previously curated the exhibition Driving the Disenfranchised: The Automobile’s Role in Women’s Suffrage. Here, prompted by two of the objects included in the exhibition Maker & Muse: Women and Early Twentieth Century Art Jewelry, she takes a closer look at the jewelry that symbolized a woman’s dedication to the cause.
"An idea that is driven home to the mind through the eye, produces a more striking and lasting impression than any that goes through the ear." Glenna Tinnin, National American Woman Suffrage Association 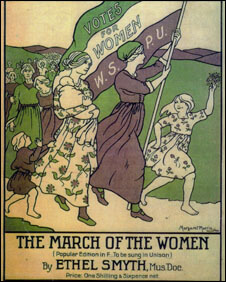 "The March of the Women" by Ethel Smyth. Courtsey Getty Images.

The British suffrage movement mirrored that of the American women’s fight for access to the polls. Having begun in the mid-19th century, the British suffrage movement stalled until the early 20th century, when momentum picked up and sentiments for suffrage shifted in favor of the franchise for women. Like the American suffrage movement, those fighting for women’s rights differed, with one faction seeking the vote through political persuasion and the other through civil disobedience. In addition to civil disobedience—and occasional violence—the Women’s Social and Political Union (WSPU), led by Emmeline Pankhurst, believed that unification through visual appearance spoke as loudly as the speeches the suffragettes were giving in the streets. 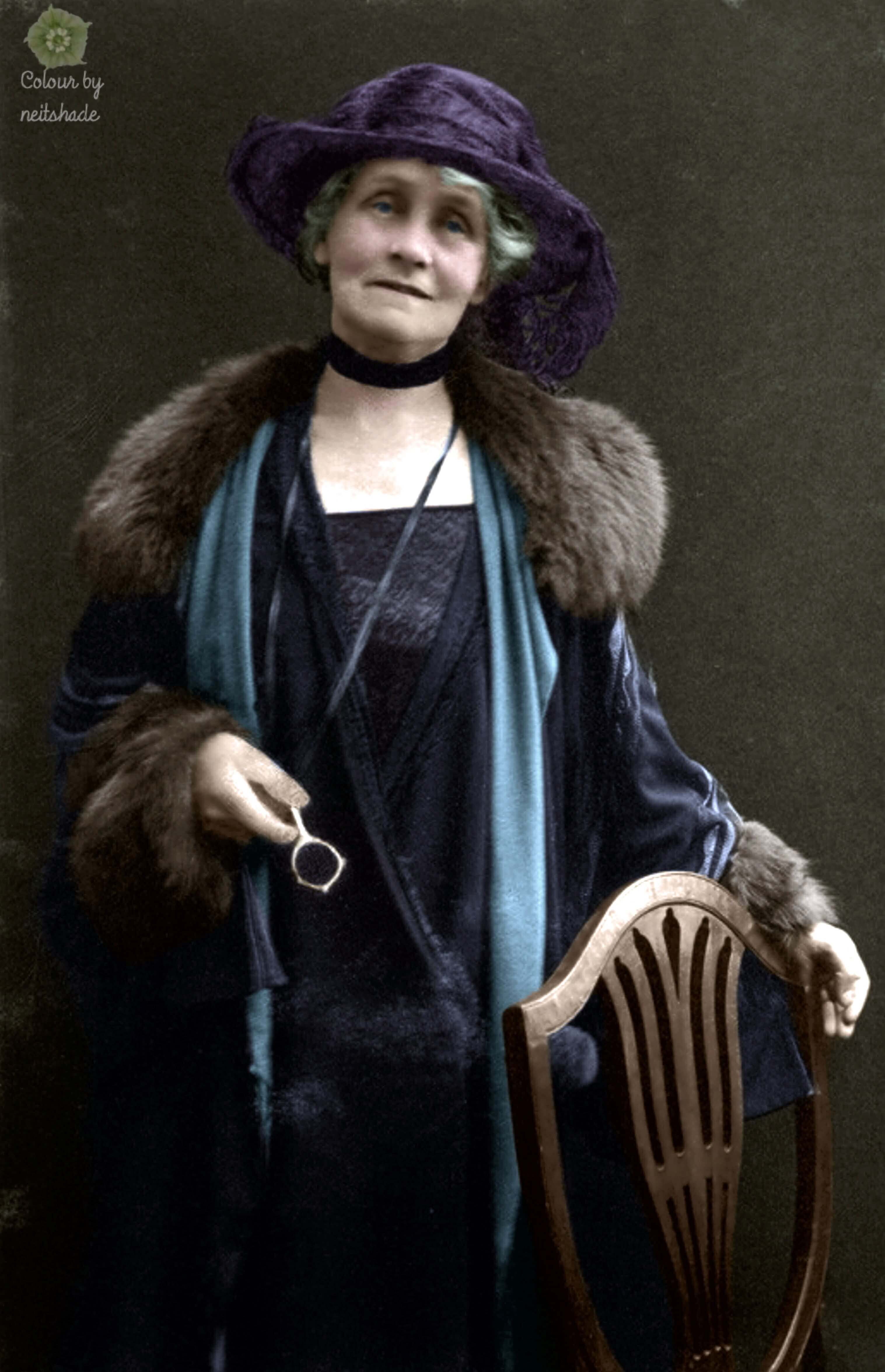 The women of the suffrage movement were often labeled unladylike, troublemakers, boorish, and spinsters. To combat these criticisms, Emmeline Pankhurst encouraged members of the WSPU to dress their best when protesting and marching. She recommended they align themselves outwardly with Edwardian ideals of femininity while publicly engaging in defiant activities that would be labeled as masculine. 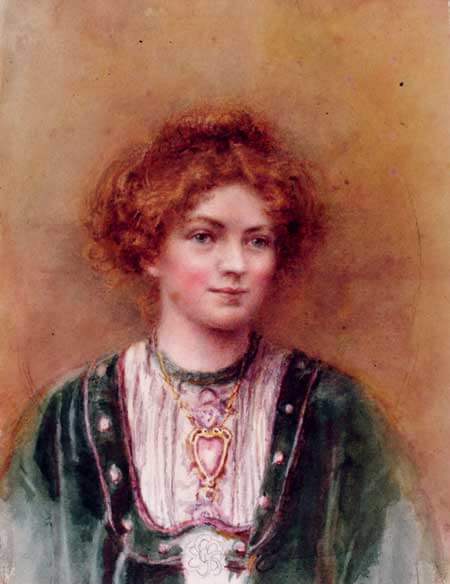 To unify members of the WSPU and supporters of the movement, Emmeline Pethick-Lawrence, the business manager of the WPSU and editor of the Votes for Women newspaper decreed in 1908 purple, white, and green the colors of the suffrage movement.

“Purple as everyone knows is the royal colour. It stands for the royal blood that flows in the veins of every suffragette, the instinct of freedom and dignity; white stands for purity in private and public life; green is the colour of hope and the emblem of spring.” Emmeline Pethick-Lawrence, Women's Social and Political Union

Although perhaps not part of Pethick-Lawrence’s original thinking, by January 1910, the National Women’s Trade Union League publication, the Union Labor Advocate, was promoting the colors—green, white, and violet—as an acrostic meant to convey the message (G)ive (W)omen (V)otes.

The suffragettes were one of the first organized movements to use merchandising and symbolism as propaganda. The color combination in varying shades and the messaging of the colors quickly caught on with many women exhibiting them. The colors were found on anything from soaps and chocolates to scarves and hosiery and incorporated into jewelry design. 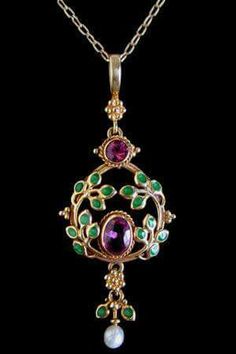 The jewelry described as suffragette falls into many categories—arts and crafts or mass-produced, it could be costume or precious, medals, brooches, pins, and things in between. Pieces were created by traditional jewelers and goldsmiths as well as women working from their homes. Some historians suggest that Jewelry was a subtle way to express support for the cause while maintaining peace at home if the wearer’s father or husband disapproved of women’s suffrage. Other scholars believe that the color combination of purple, white, and green was widely known to represent the suffrage movement and the suffragettes; it was not subtle but instead deliberate. 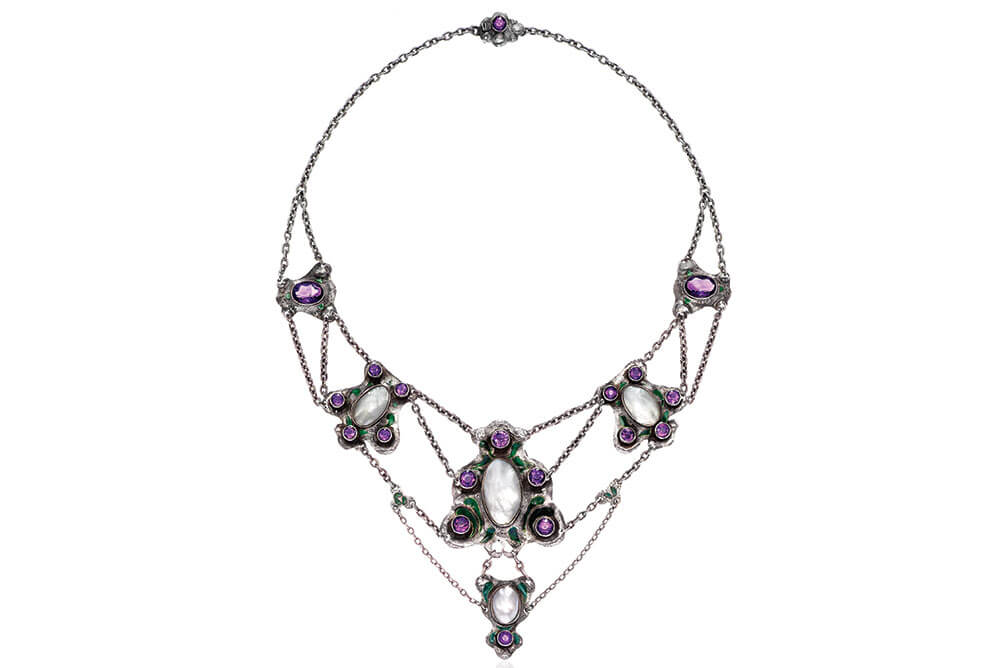 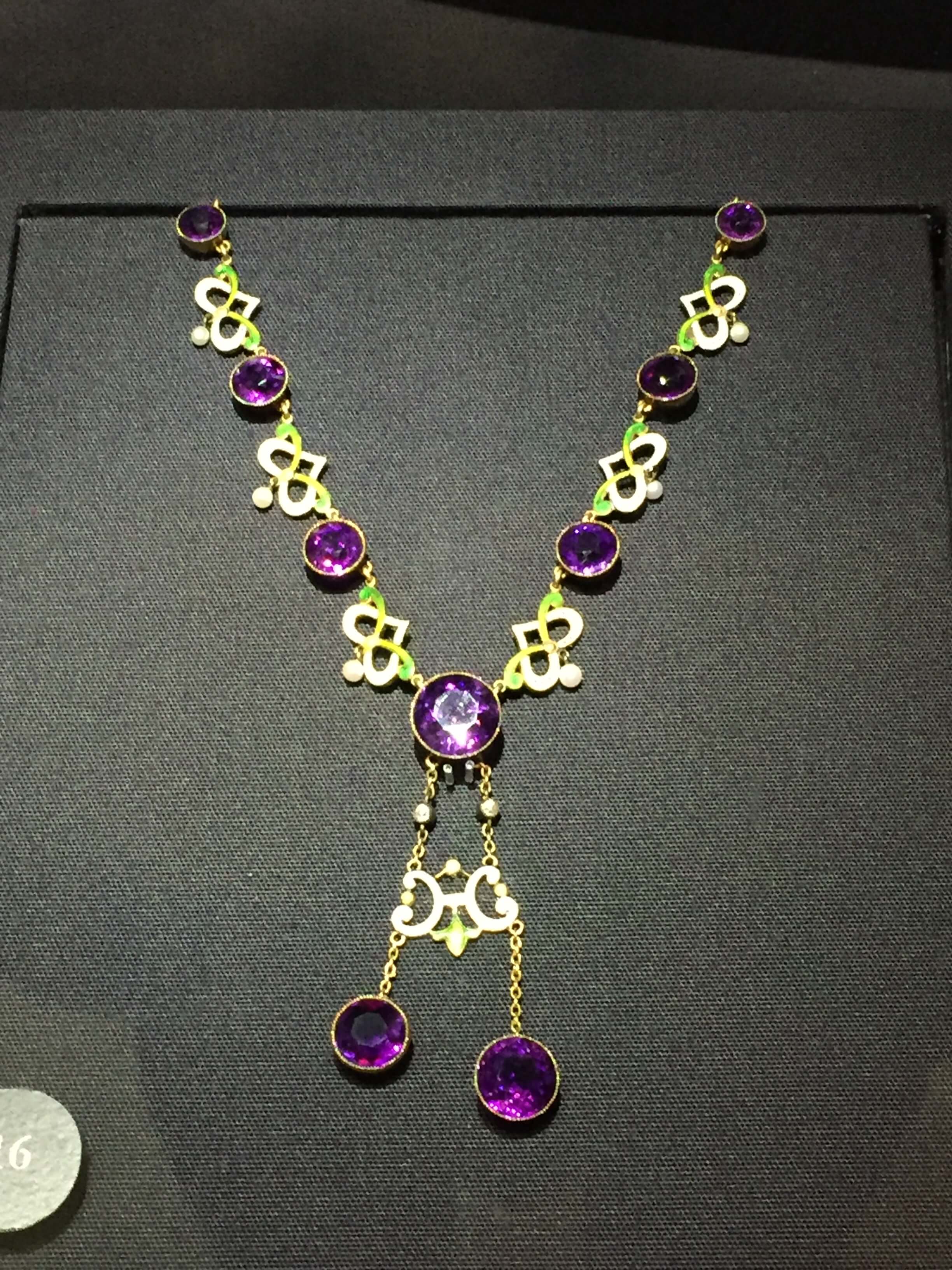 Semi-precious stones such as amethyst, moonstone, pearl, and chalcedony (a green gemstone) were selected for high-end luxury pieces, and glass beads or colored stones were used for the less expensive objects. From an aesthetic standpoint, the chosen colors of purple, white, and green were visually pleasing; purple and green are complementary colors on the color wheel. The discovery in Russia’s Ural Mountains of demantoid garnet, a bright green gemstone, led to demantoid fever with an explosion of the gemstone in Edwardian and Art Nouveau designs. Likewise, both the green gemstone peridot and the purple precious stone amethyst were said to be the favorites of King Edward VII and Queen Alexandra, respectively. 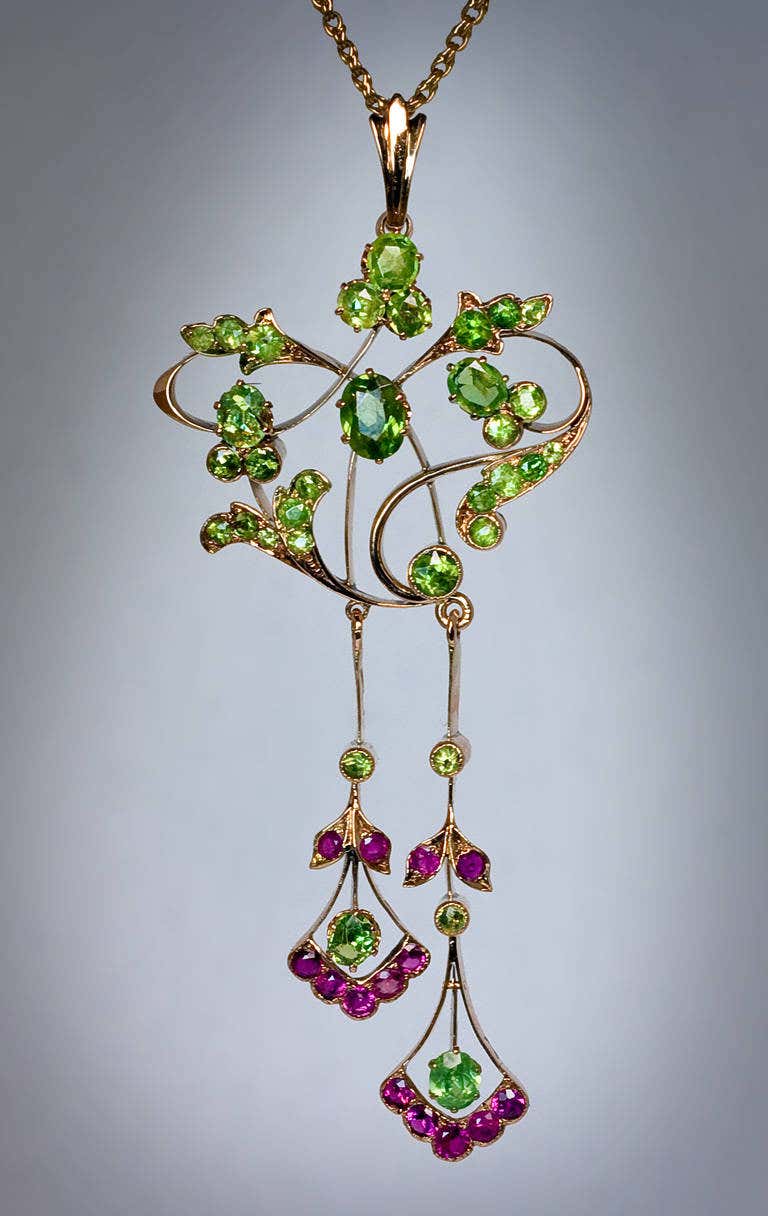 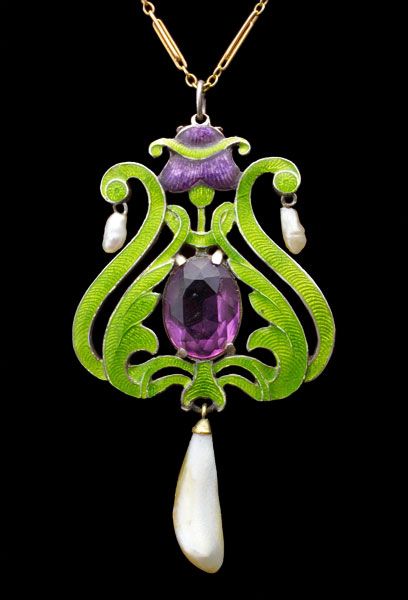 Jewelers like London’s Child & Child and Mappin & Webb, along with department stores like Selfridge’s and Liberty, saw an opportunity to align with the cause that by 1908 was sweeping the country. 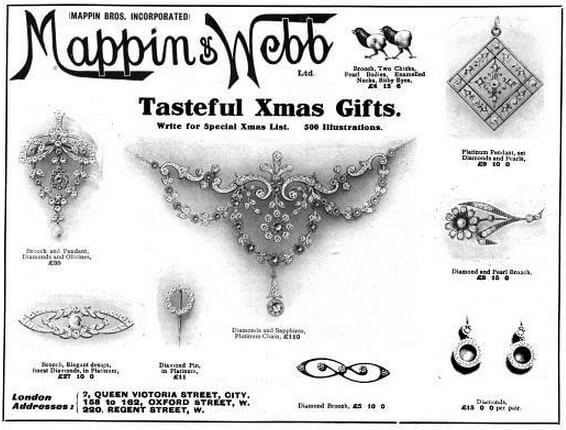 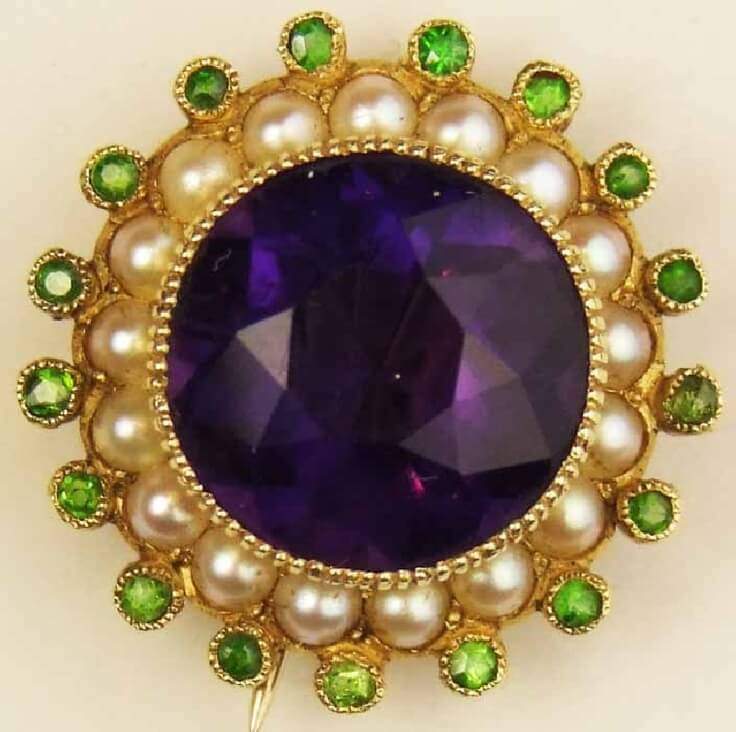 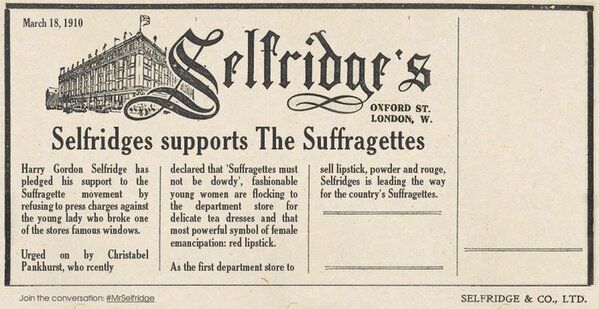 It was common for women to wear pins on their coats or other jewelry in the suffragette colors when attending rallies. Some chose a beaded necklace in purple, white, and green, a brooch made of semi-precious stones attached to a high-collared blouse, or a simple tin badge with Emmeline Pankhurst’s image adorned with tri-color ribbons. 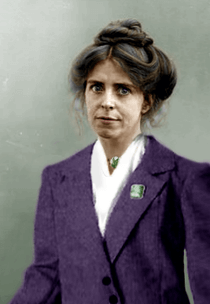 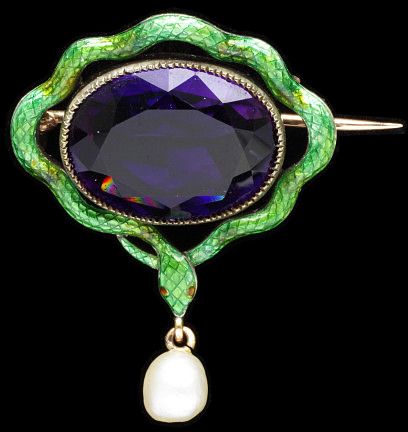 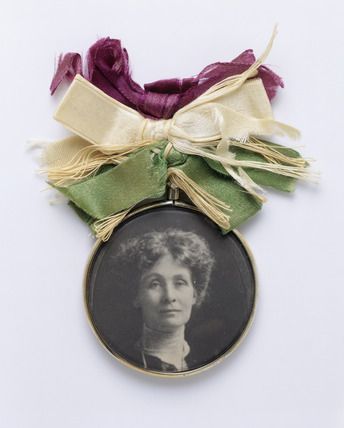 It wasn’t just custom-made pieces with precious stones, jewelers also produced pins showing support for the campaign and badges that commemorated events within the cause. 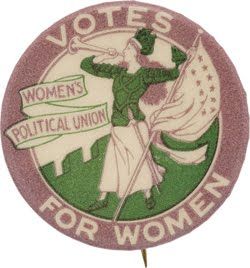 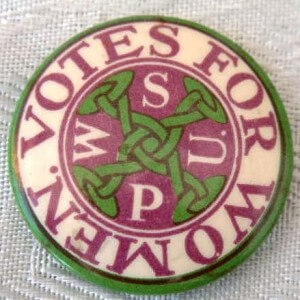 “Every woman walking in the procession wore the purple, white and green either in favours pinned to the breast, or in the trimmings of a hat, in belt ribbons or in shoulder sashes” The Times reporting on Women’s Sunday, the WSPU’s first meeting attended by 300,000 in Hyde Park in June 1908
A Medal of Valor was made honoring those women who endured hunger strikes while imprisoned for protesting. A purple, white, and green ribbon included attachable bars that indicated the date and length of incarceration. The hanging medallion read “hunger strike” with the woman’s name engraved on the reverse. 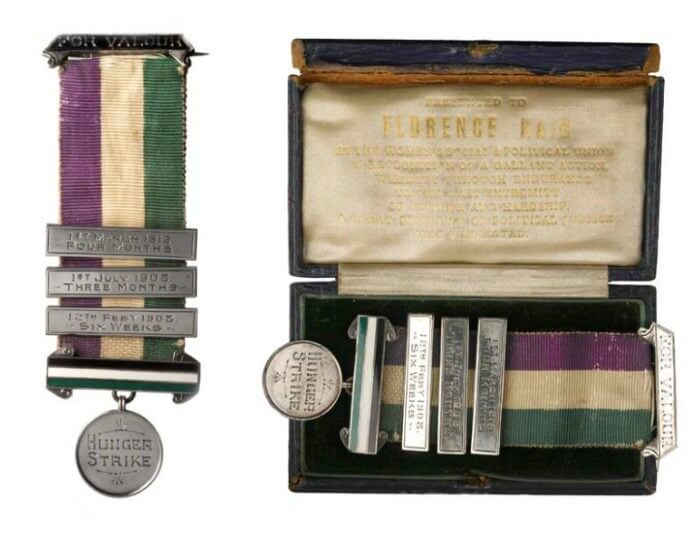 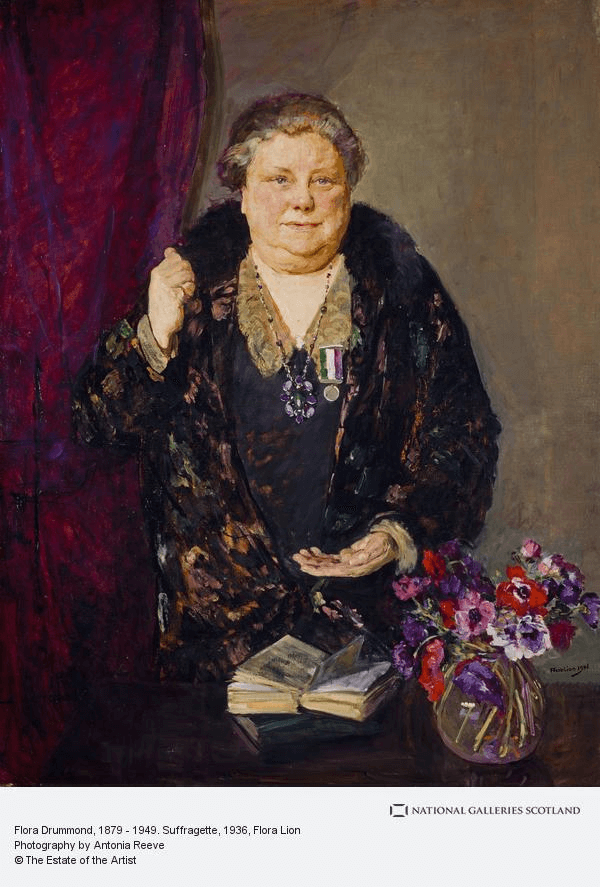 Sylvia Pankhurst, Emmeline’s daughter, designed a brooch that depicted the portcullis (the symbol of the House of Commons), a broad arrow (the convict symbol) in purple, white, and green enamel, and hanging chains. The brooch was given to those suffragettes who had been incarcerated at Holloway Prison. The brooch was referred to as the Holloway Prison brooch, the Portcullis badge, and the Victoria Cross of the Union. 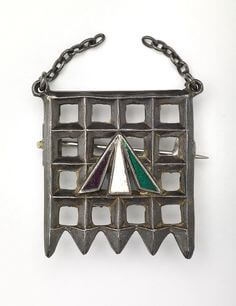 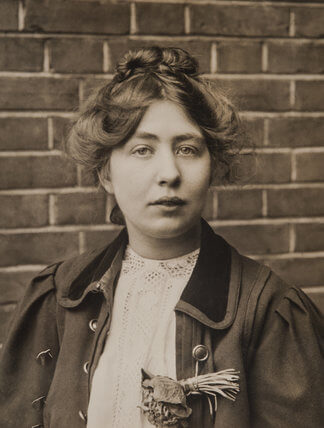 Due to a lack of documentation, it cannot be known for certain how many pieces of fine jewelry of the era qualify as Suffragette Jewelry. Some pieces were made specifically for leaders of the party, but many more examples exist that were merely purchased with the intent to be worn in support of the cause. The stylish jewelry became an important part of identity for WSPU members, a way to communicate their solidarity without words. 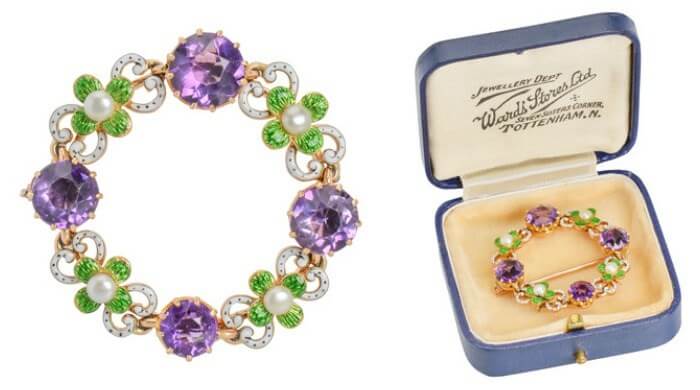 Each piece of jewelry, though personal, was a visual representation of a woman’s support for the movement and unified them behind the cause of suffrage. The marketing tools shifted from pamphlets and banners that could be discarded after a rally to heirlooms that could be handed down from one generation to next, a reminder of the strength of our foremothers and the continued fight for ourselves. 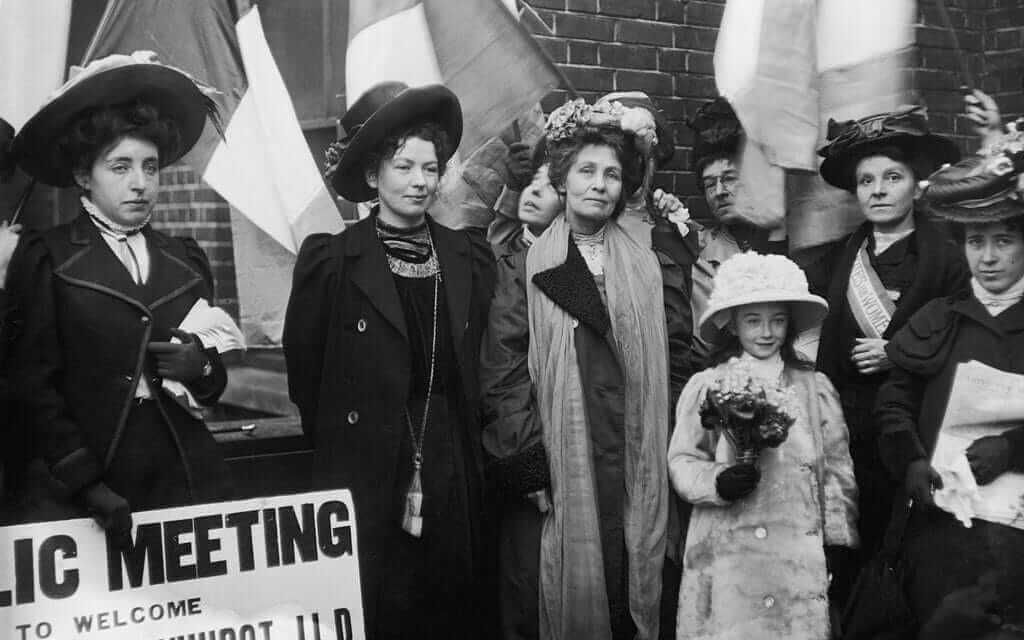 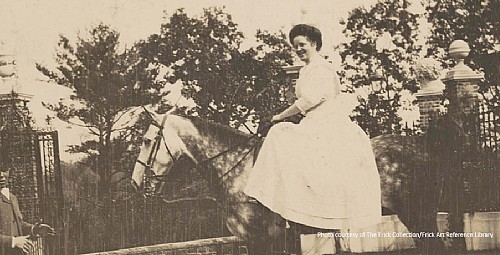 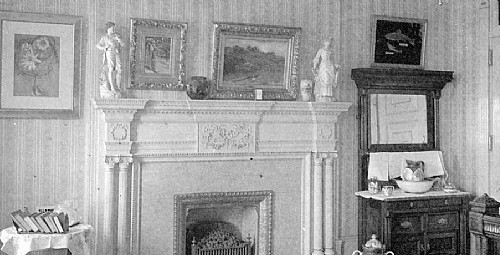