Last week we reached out to the public and asked for ideas about what you would like to learn more about as we work from home creating online content to bring The Frick into your homes during this unprecedented closure. We were delighted to start getting requests right away. More kids’ activities? Check. A Henry Clay Frick recommended reading list? Coming soon. We’re getting great ideas, so keep them coming to info@frickpittsburgh.org.

One request was for images of the rooms in Clayton that are not featured on tours. As many of our visitors know, only the first two floors of Clayton are open to the public. Fire codes prevent us from opening the third and fourth floors to visitors, but we are lucky to have archival photos of the rooms as they were used by the Frick family circa 1901. Follow along for a tour of the top two floors of Clayton. 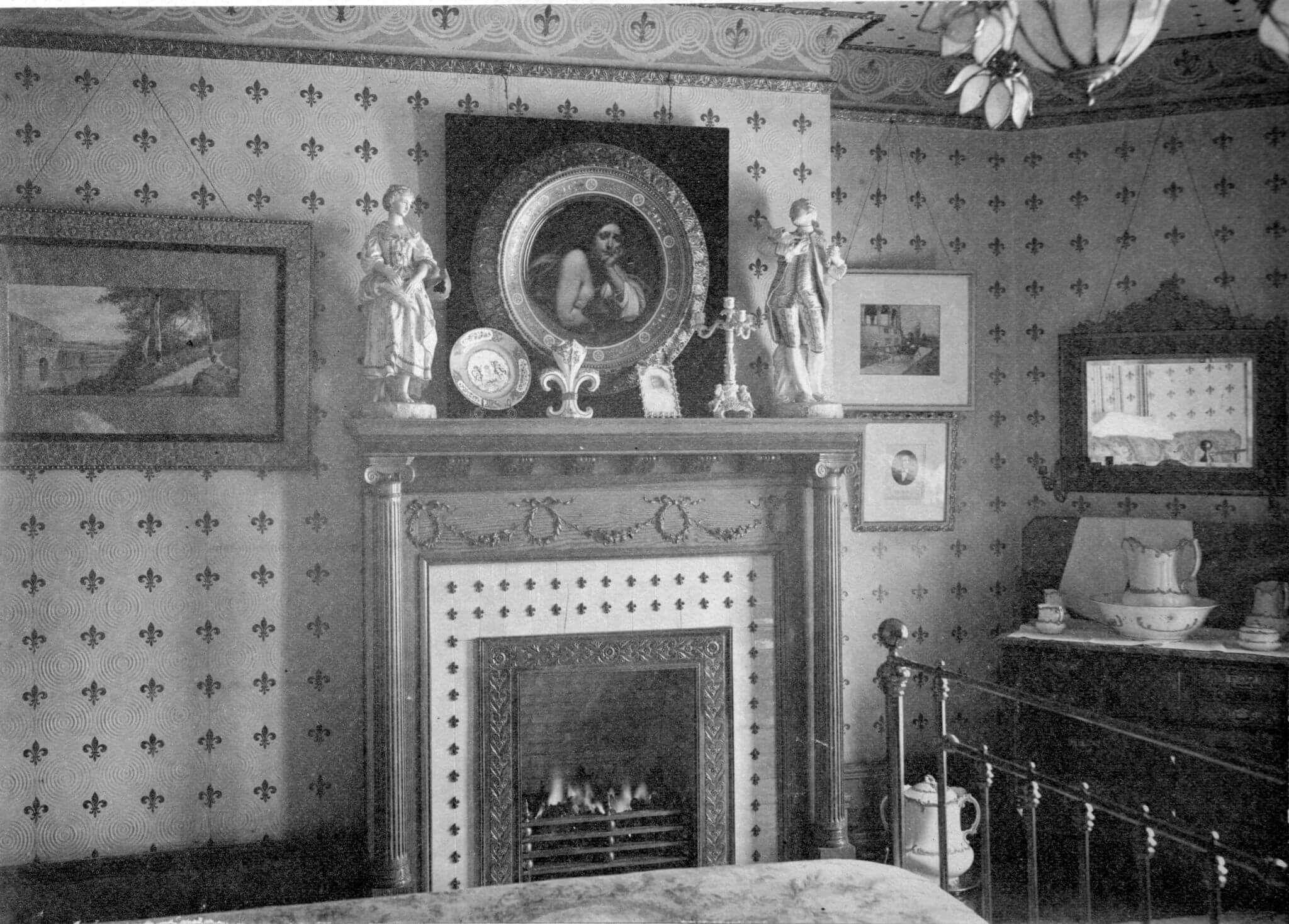 The White Room at Clayton, circa 1901. Courtesy of The Frick Collection/Frick Art Reference Library Archives.

At the top of the steps to the third floor are the White Room and the Yellow Room, guest bedrooms for visitors to Clayton. Archival evidence indicates that “Aunt Attie,” Adelaide (Mrs. Henry Clay) Frick’s sister Martha Howard Childs, stayed in the White Room when she lived with the family in the early 1890s. The White Room and the Yellow Room share a bathroom that was added during the 1890–1892 remodeling by Frederick J. Osterling. Like Adelaide Frick’s bathroom on the second floor, this bathroom also contains stained glass panels supplied by Alfred S. Godwin, depicting allegories of winter and spring. 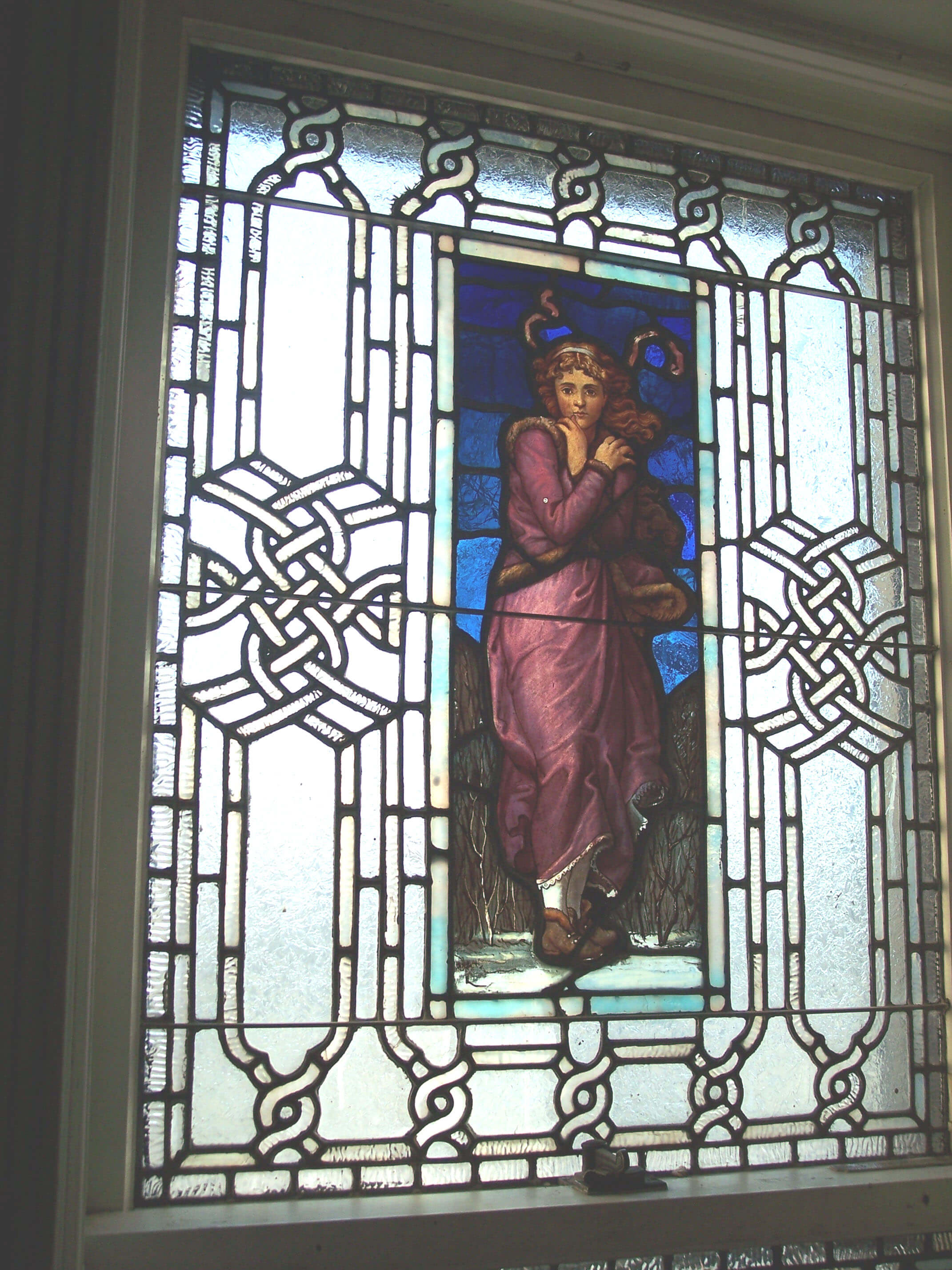 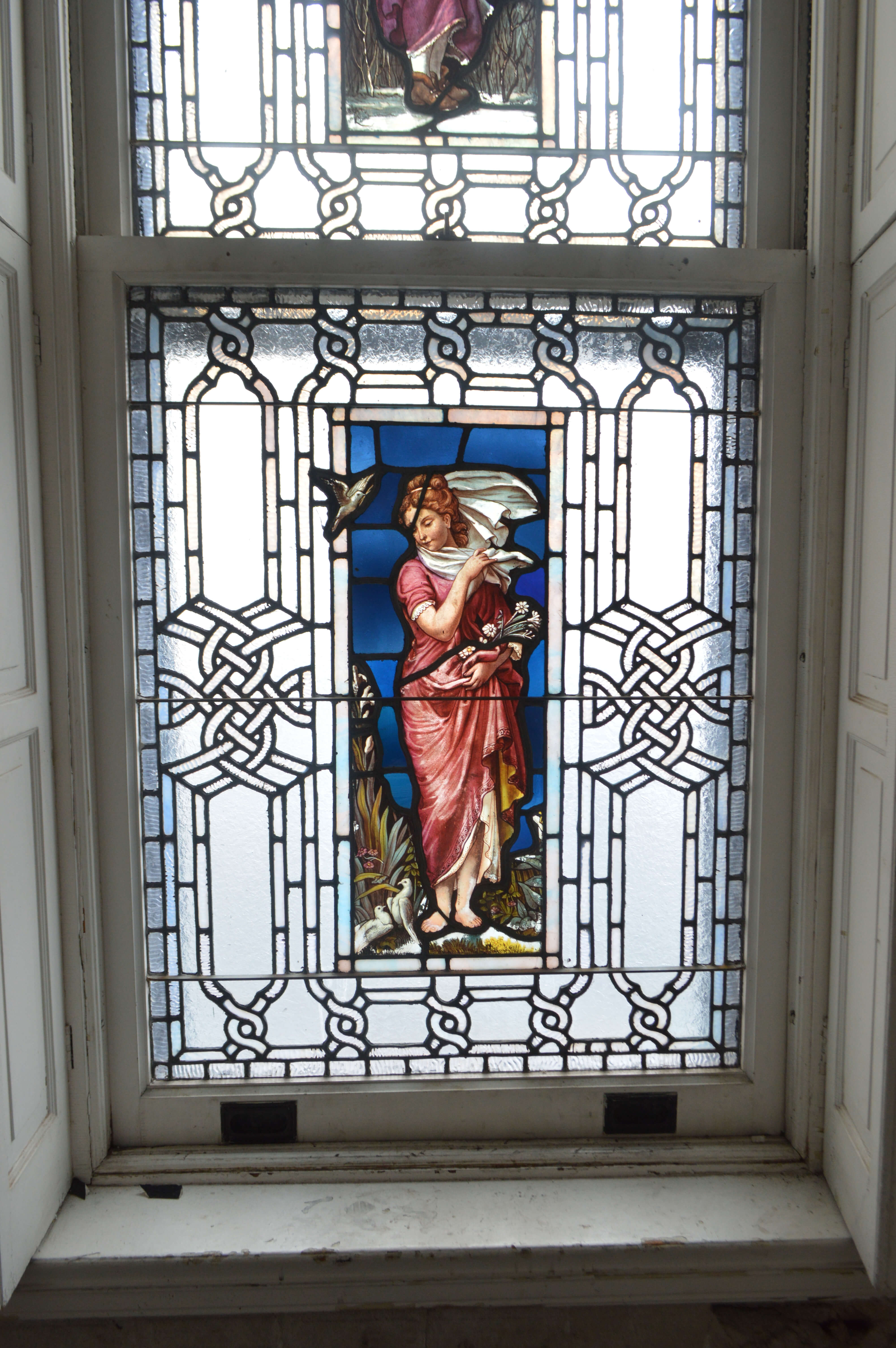 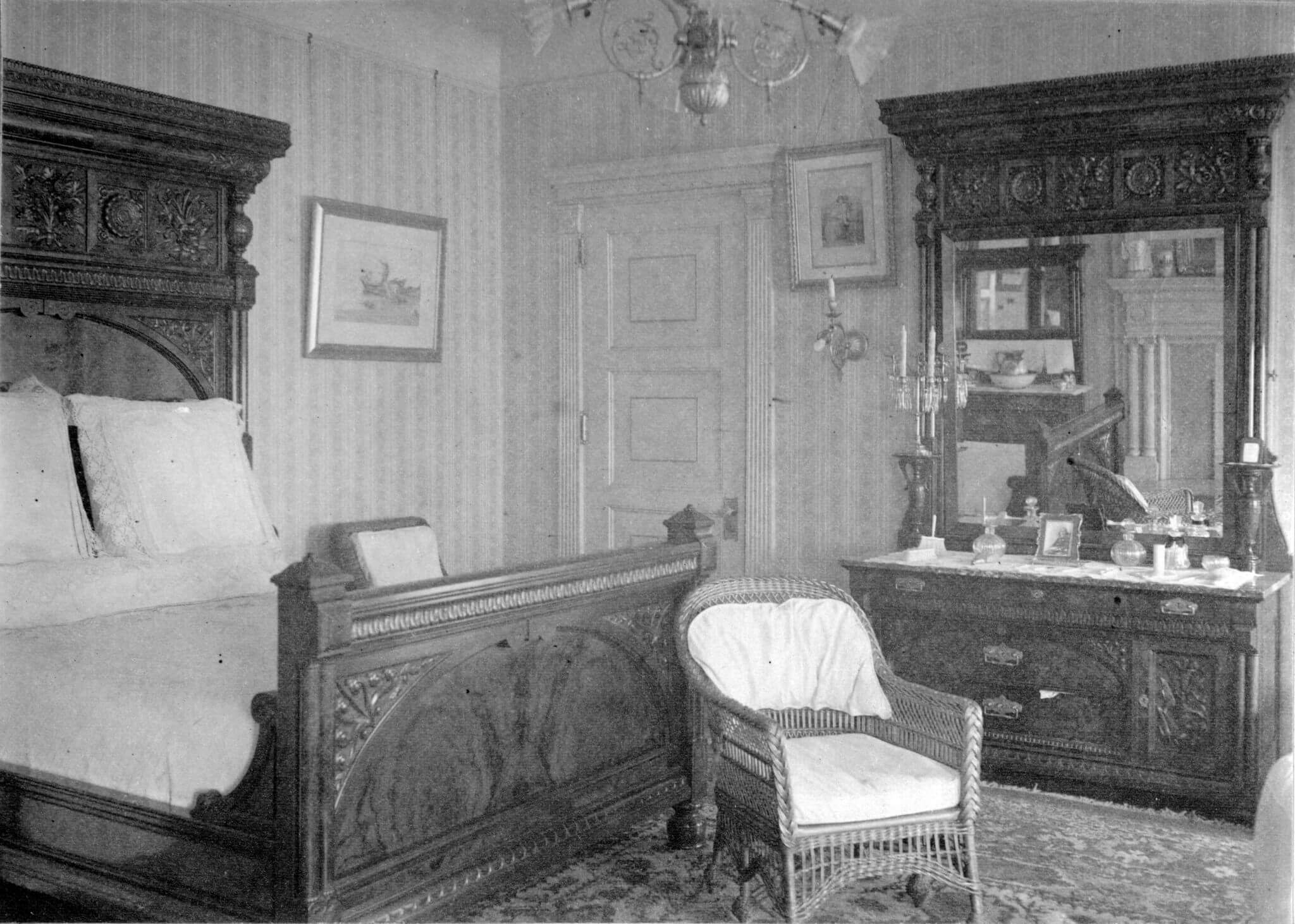 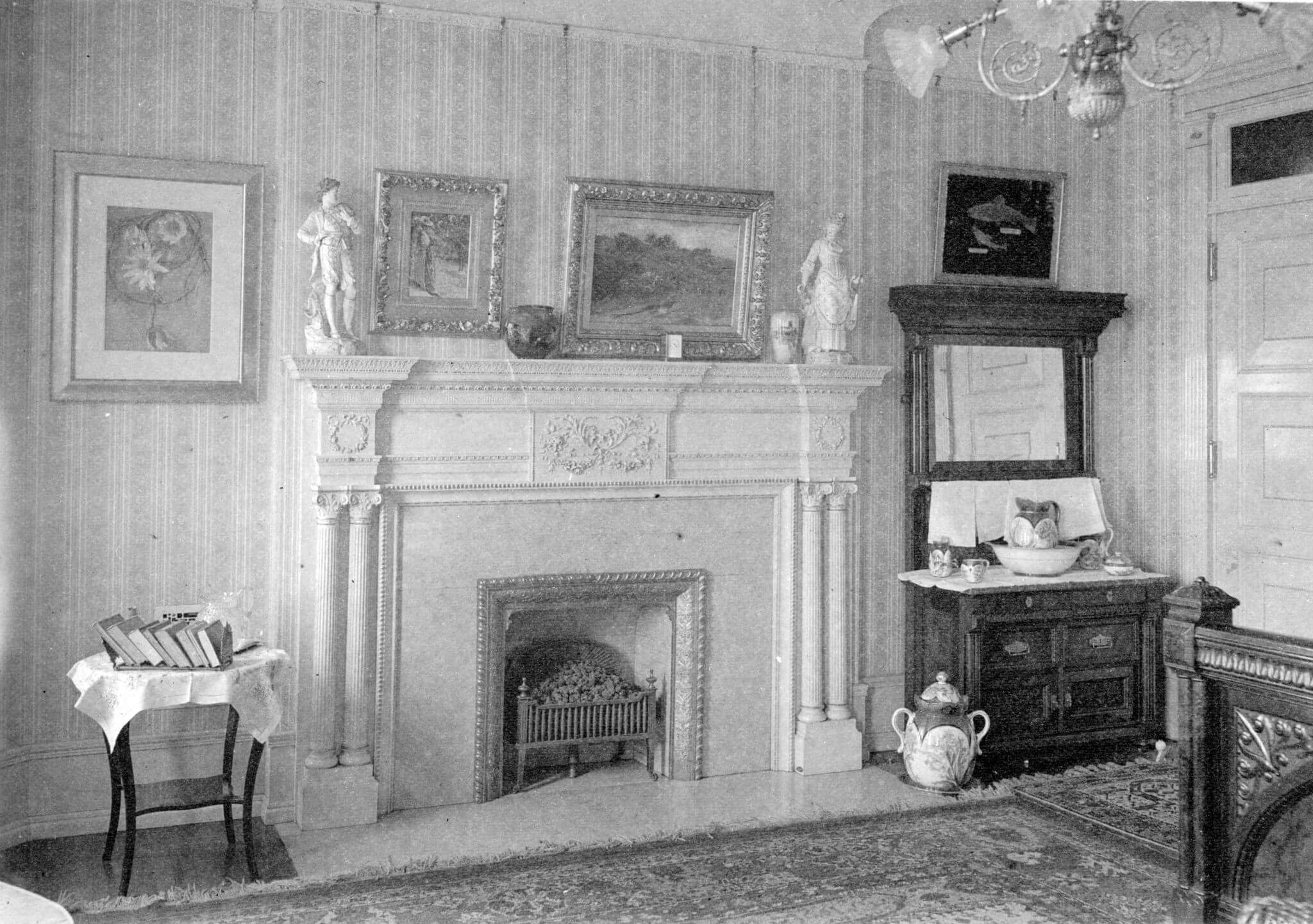 Recognize the painting above the mantle on the left? It’s Going for a Drive by Charles Courtney Curran, now on view in the library at Clayton. As you peruse these images, you’ll likely recognize other objects that are now displayed elsewhere in Clayton. 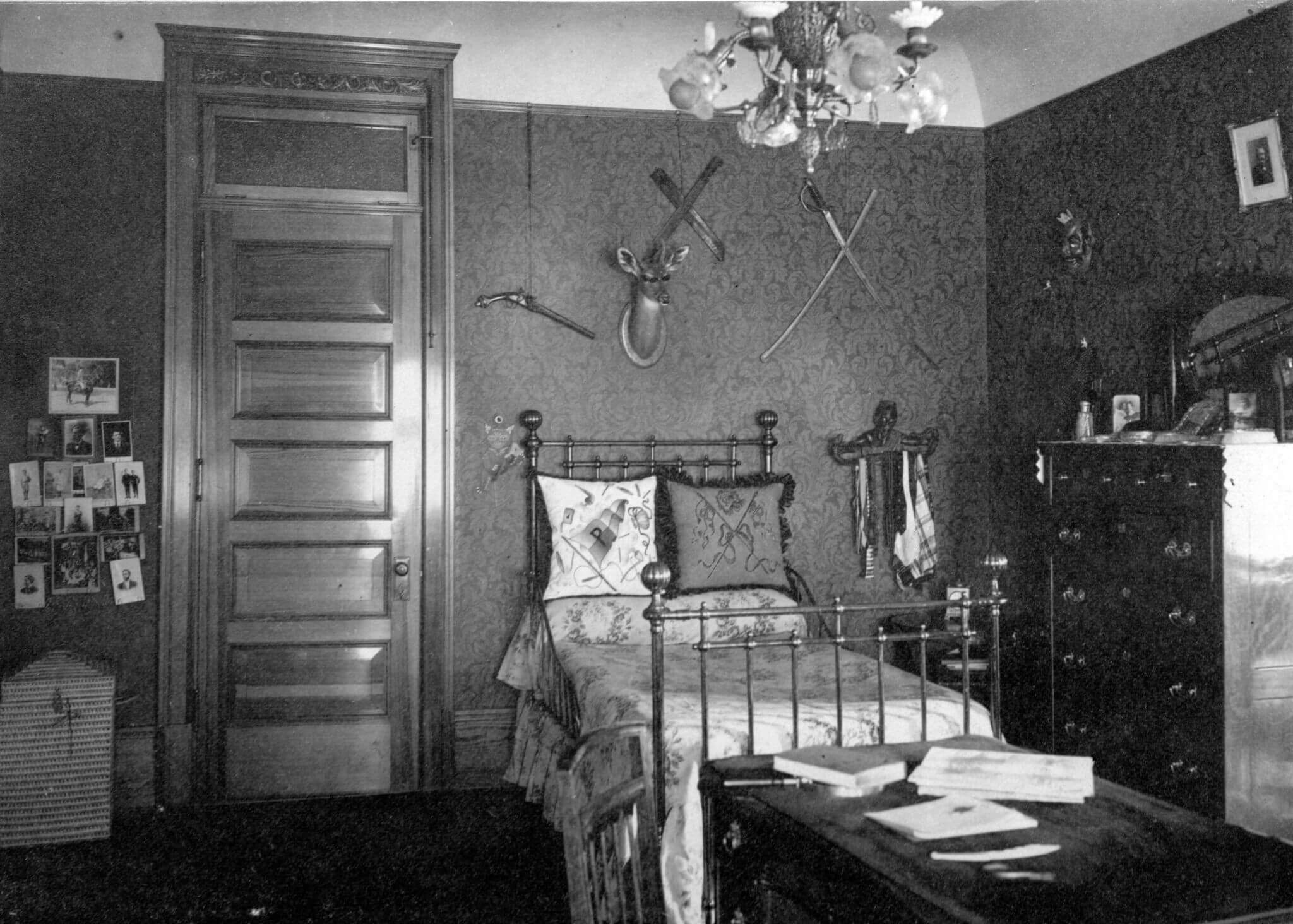 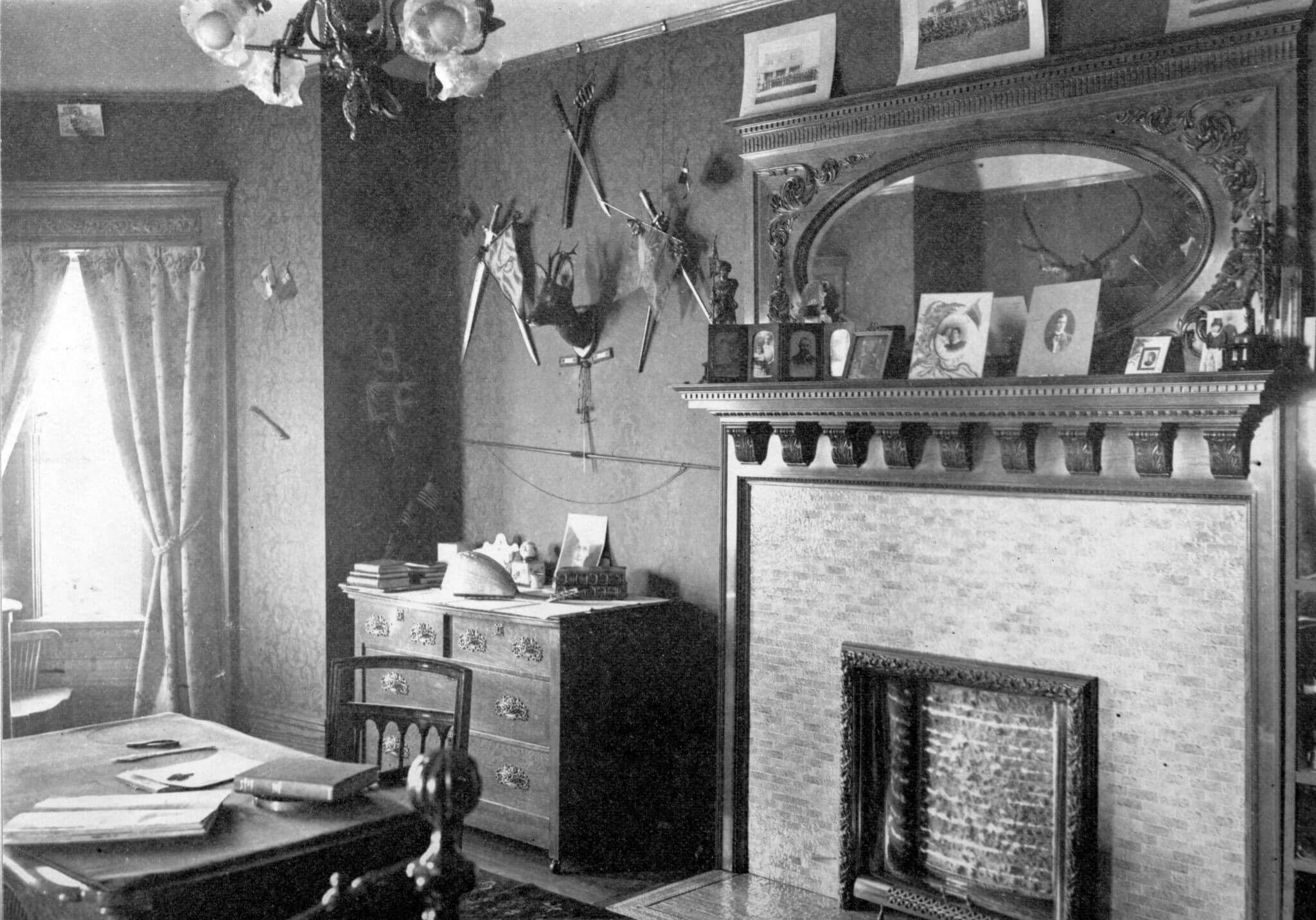 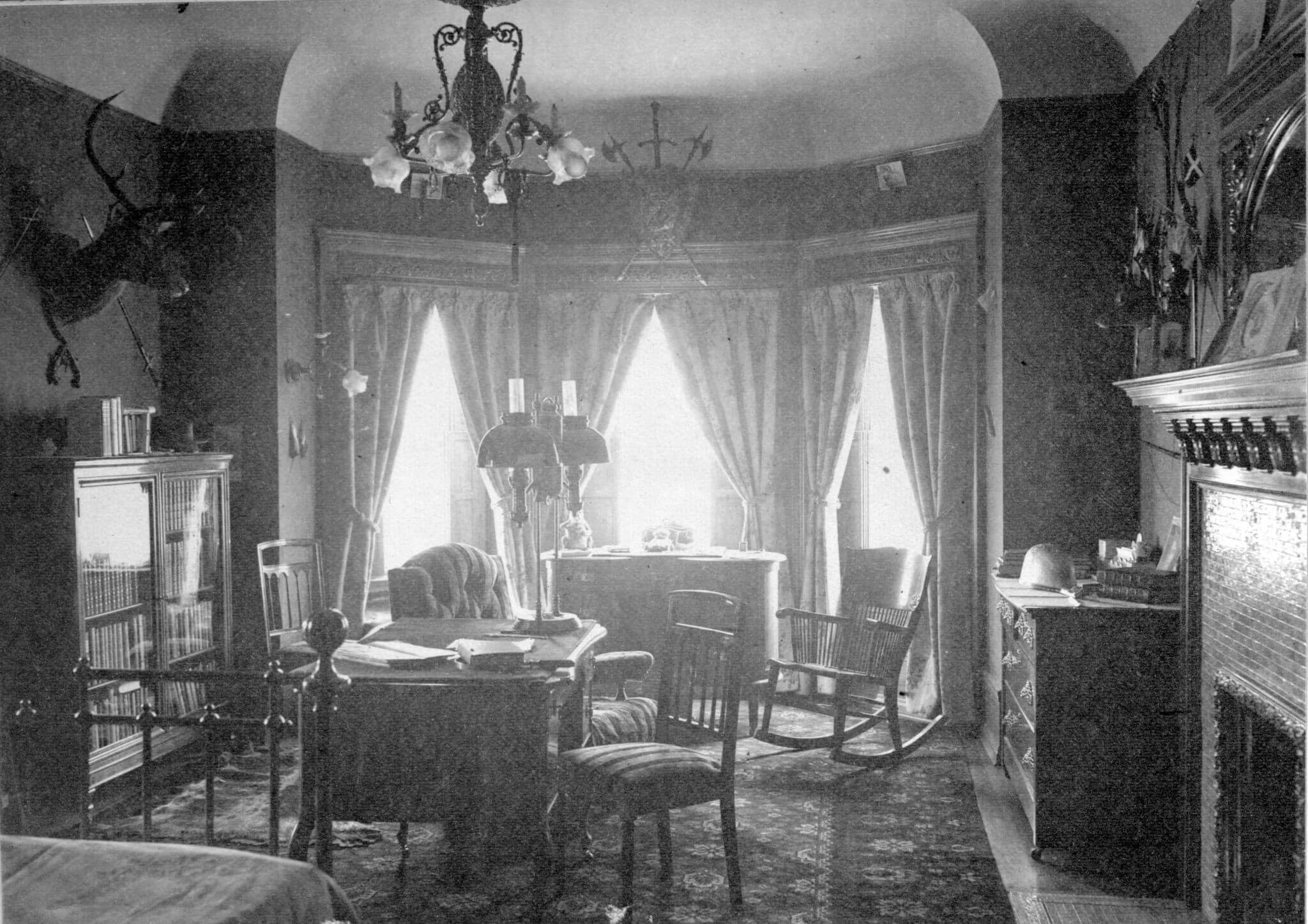 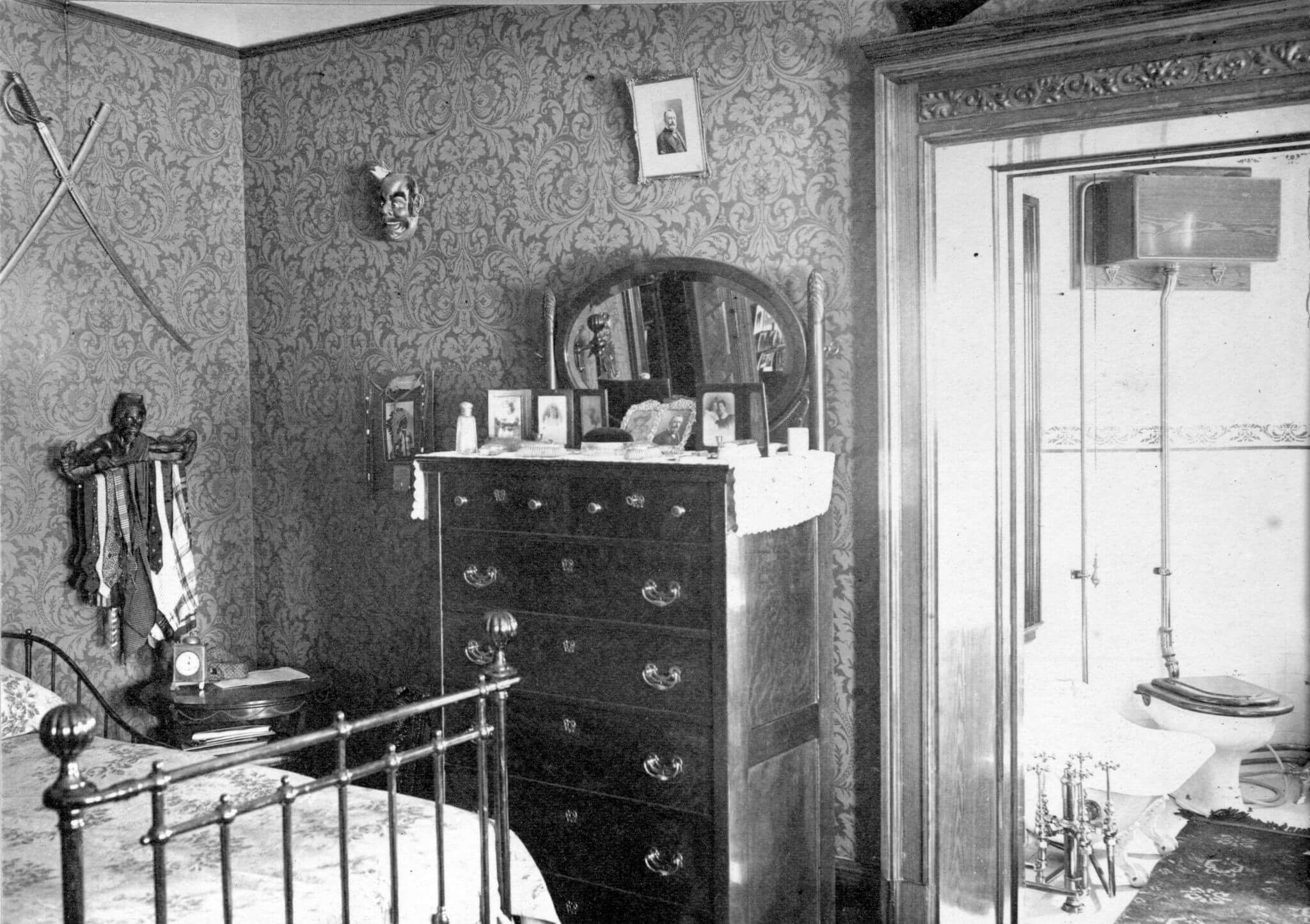 Eldest son Childs Frick’s room is also on the third floor. His room reflected his interests in natural history, botany, and exploration. While younger sister Helen’s bedroom is decorated with delicate birds, butterflies, and flowers, Childs’s room was adorned with swords, rifles, and animal trophies. The room is filled with memorabilia and photographs. Look closely for objects relating to his alma mater Princeton. One view also allows for a peek into his bathroom, added to the house in 1897. Notice the elevated water tank above the toilet which used gravity pressure to flush, and the sitzbath—just like the one visitors can see in Mrs. Frick’s bathroom— with its daunting array of handles including “hot,” “cold,” “bidet,” and “L. spray.” Multiple sitz baths installed in the home demonstrate the Fricks’ interest in the health benefits of hydrotherapy, common for this period. 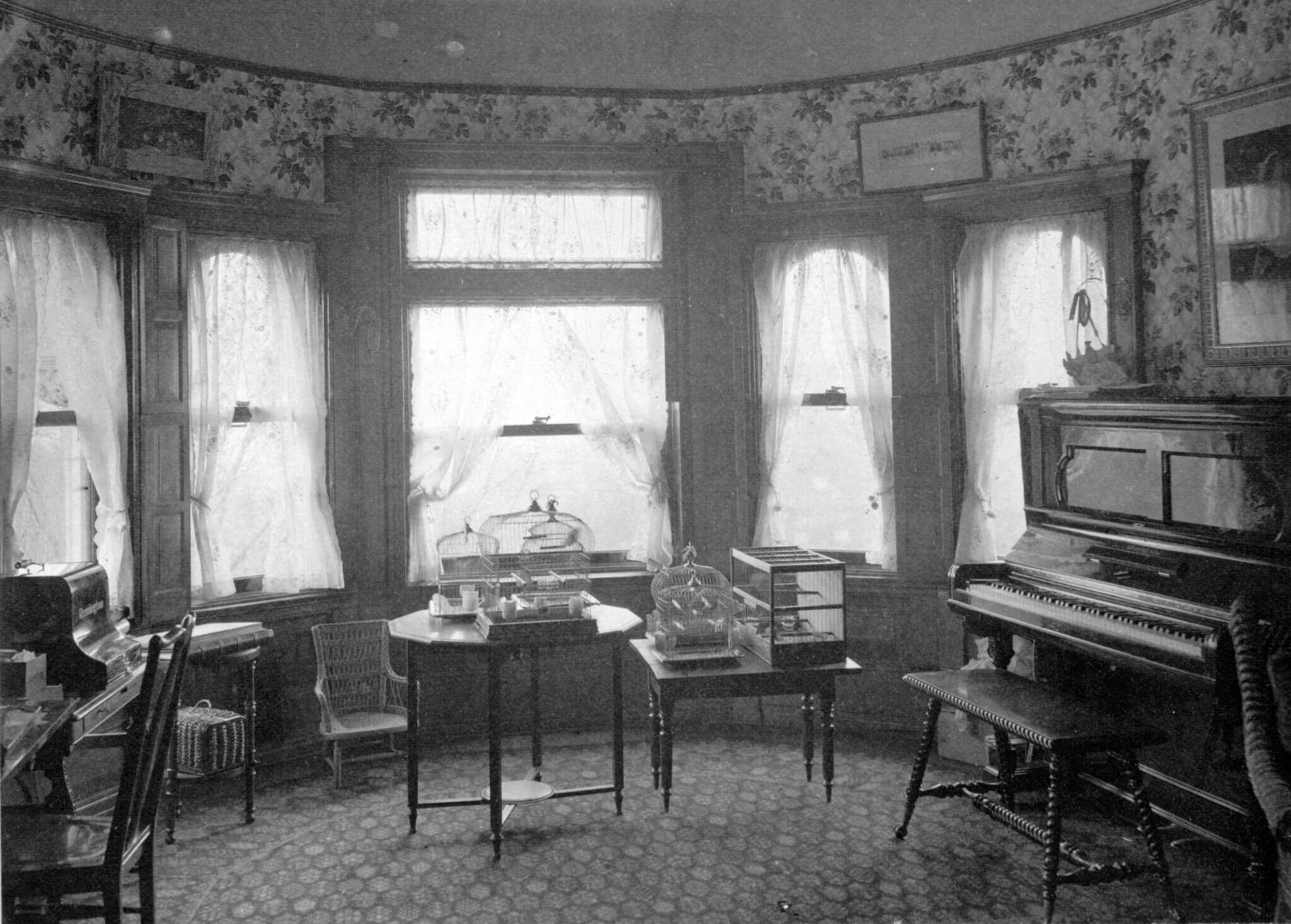 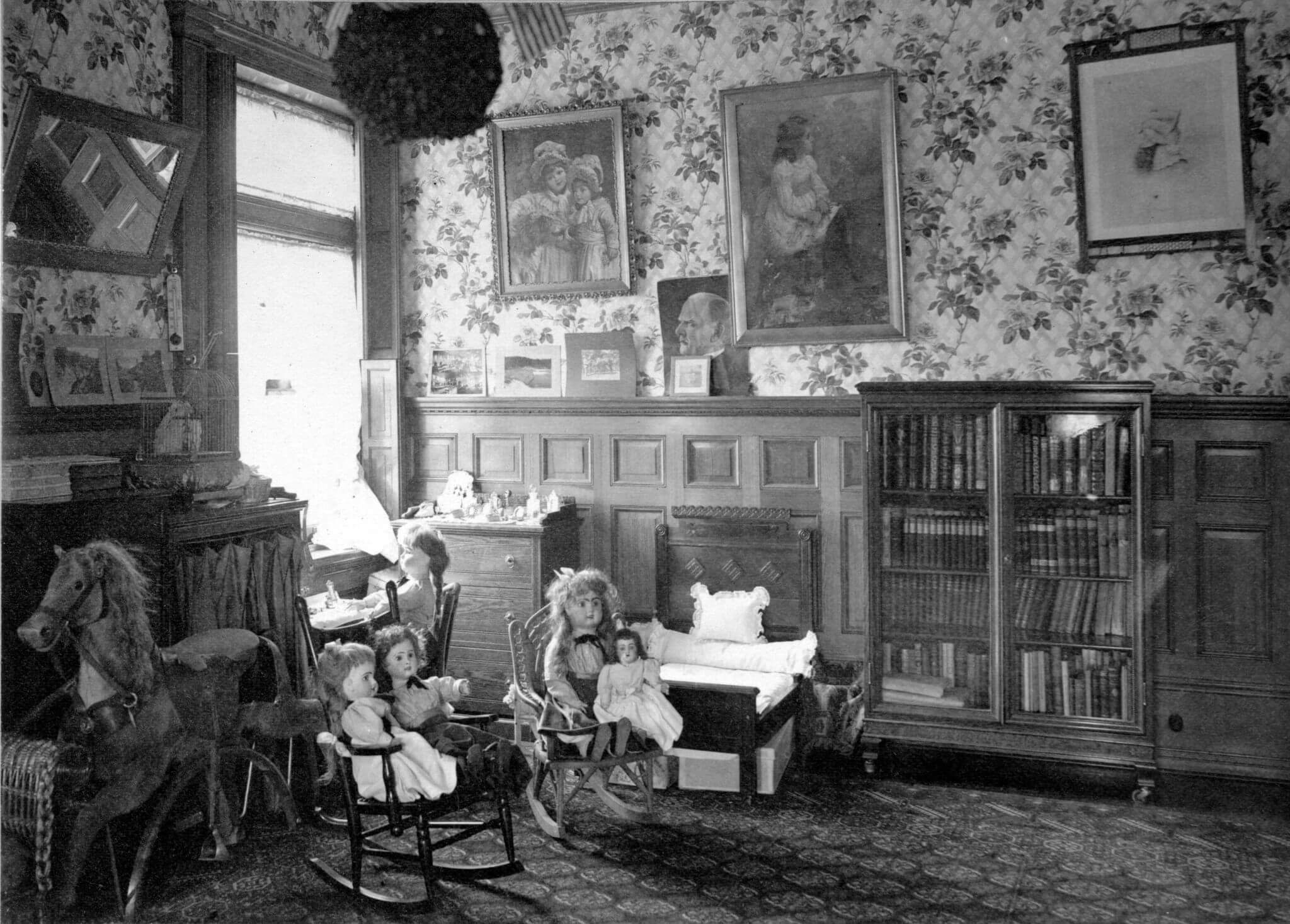 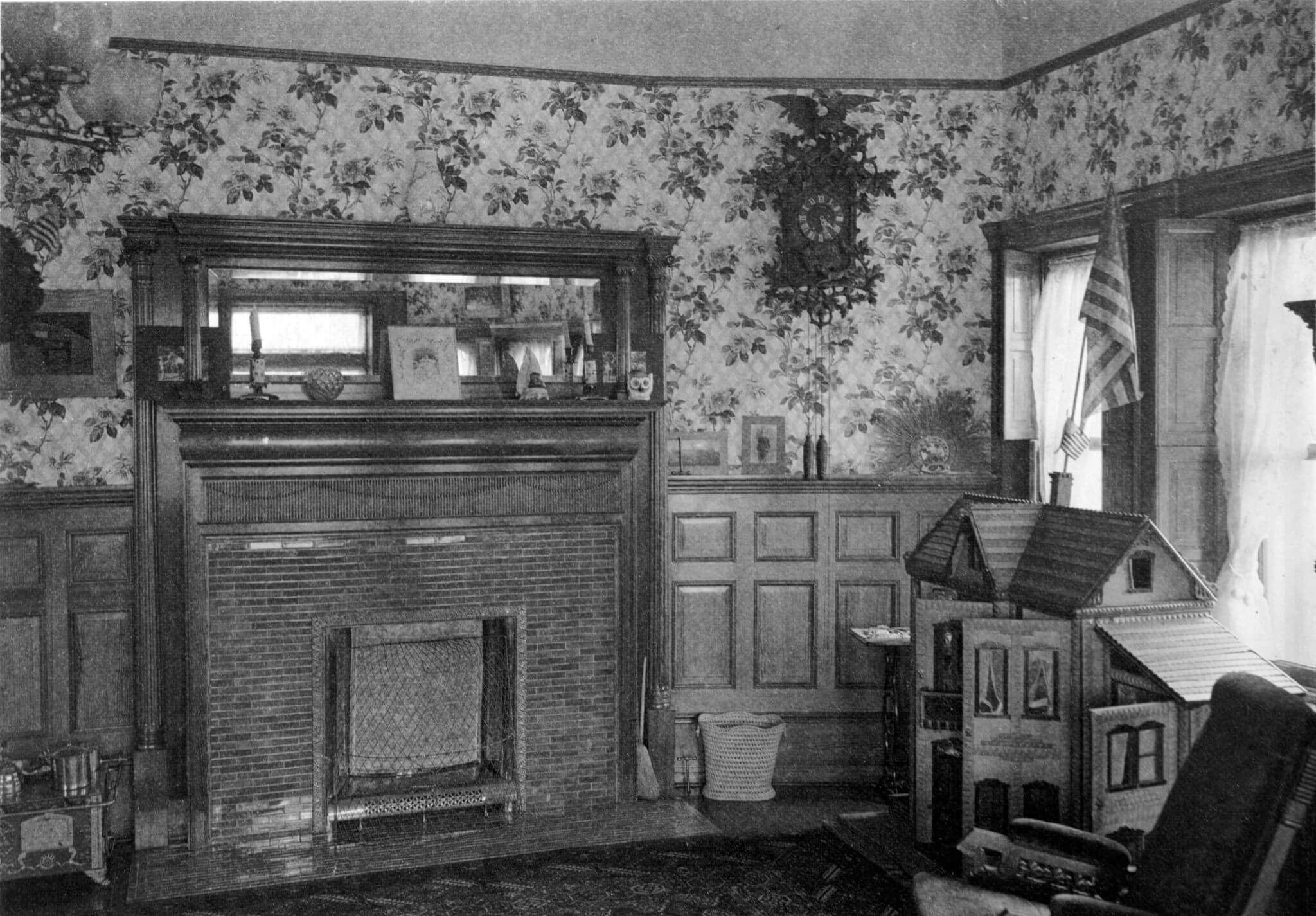 Playroom at Clayton, circa 1901. Courtesy of The Frick Collection/Frick Art Reference Library Archives.

In addition to the playhouse that was constructed on the grounds by Alden & Harlow in 1897, the Frick children had a playroom on the third floor of Clayton, dating to the 1892 Osterling remodeling of the house. The curved windows indicate the room’s position above Mr. Frick’s room on the second floor and the reception room on the first floor, which both have a corresponding shape. The playroom was home to Helen’s birds and doll collection.

The room, perhaps surprisingly, hosted some prominent figures in Pittsburgh history. Helen remembered her father’s friends Andrew W. and Richard Beatty Mellon making the trek to the third floor to call upon her during their visits with her father: “They had many affairs of mutual interest to discuss, and when they were through they would often climb the stairs to the third floor and call upon me in my playroom. These were delightful occasions for me, and in anticipation of them I was fully prepared to serve refreshments which they were kind enough to taste or else pretend to enjoy while they sat in chairs much too small to be comfortable and at a table that was far from the proper size.” 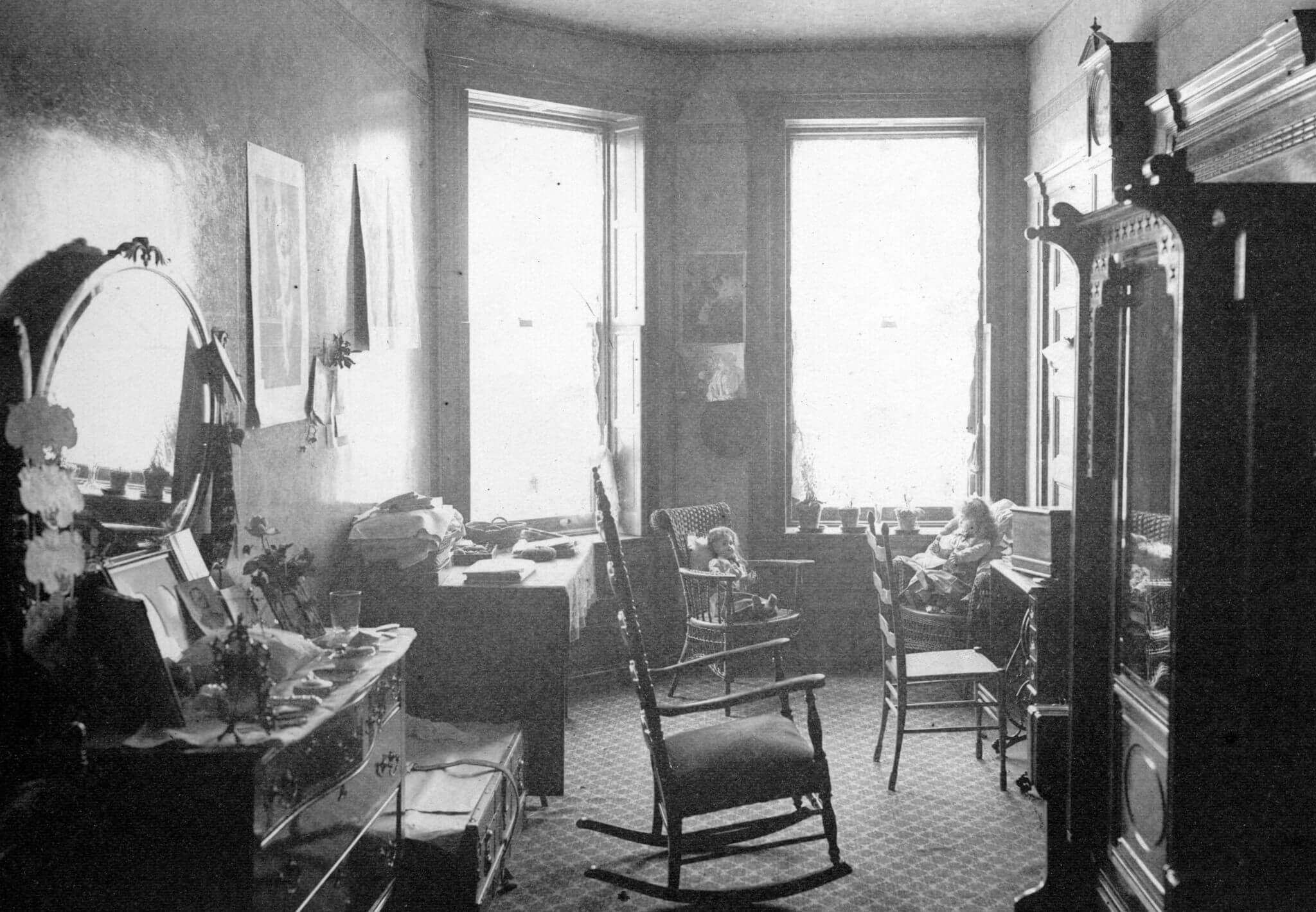 There was also a sewing room on the third floor. It was likely used by Mrs. Frick’s lady’s maid for mending Mrs. Frick’s delicate lace and silk ensembles, although the presence of more dolls suggests it was also used by the children. 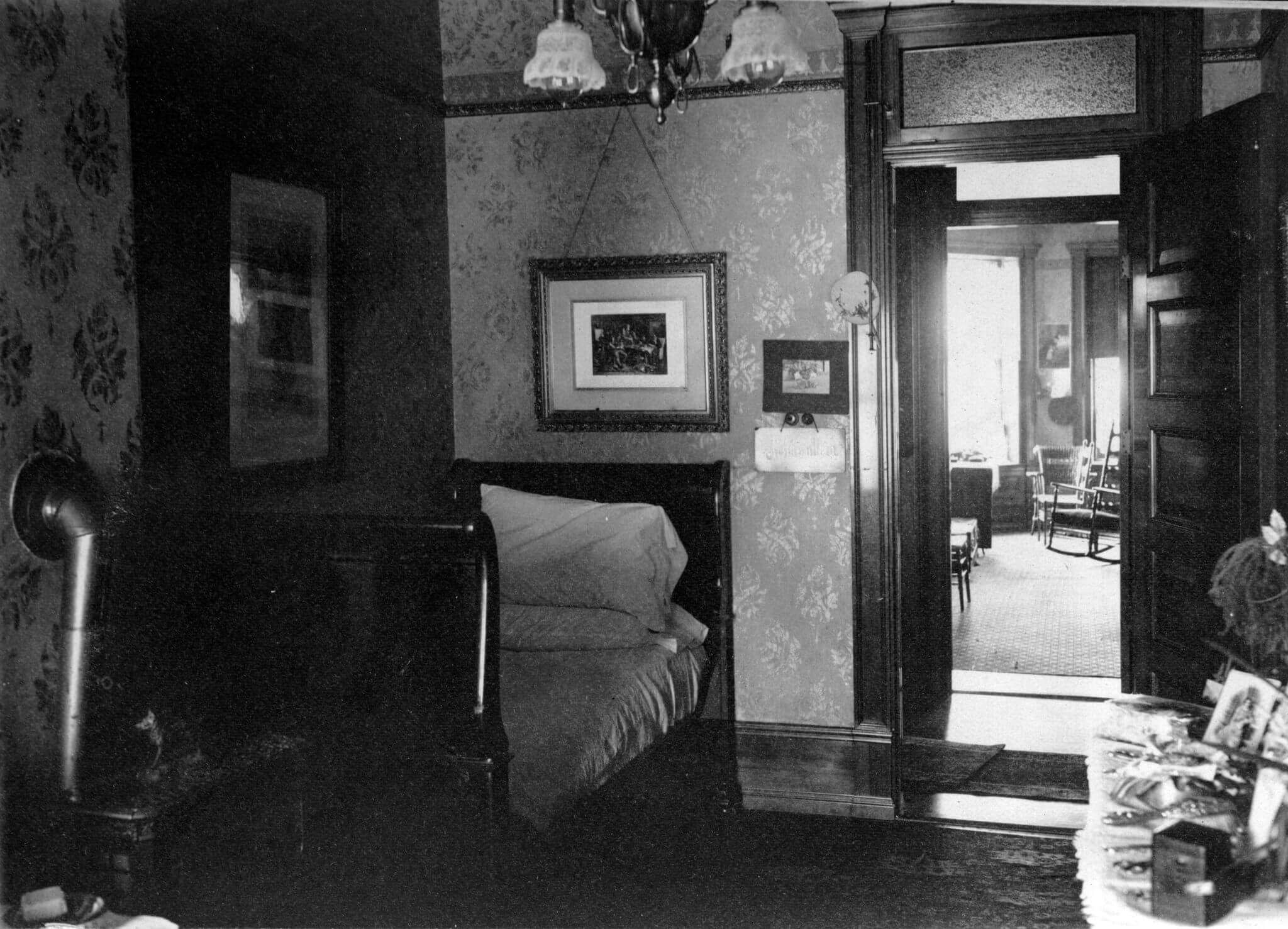 Governess Marika Ogiz had her own room on the third floor. Ogiz, who was born in Switzerland, served as teacher and companion to Helen Clay Frick between 1897 and 1905. Her position among the senior staff of the Frick household granted her certain privileges. She traveled with the family, dined with them most evenings, and accompanied them on local outings. The cozy room was outfitted with a double bed, dresser, and desk.

Mademoiselle Ogiz wasn’t the only member of the staff with living quarters at Clayton. There were bedrooms for the maid and other domestic servants on the third floor, evidenced by the rooms listed on the annunciator, or call system, in the kitchen downstairs. Regrettably, these spaces are not documented in the circa 1901 photographs. 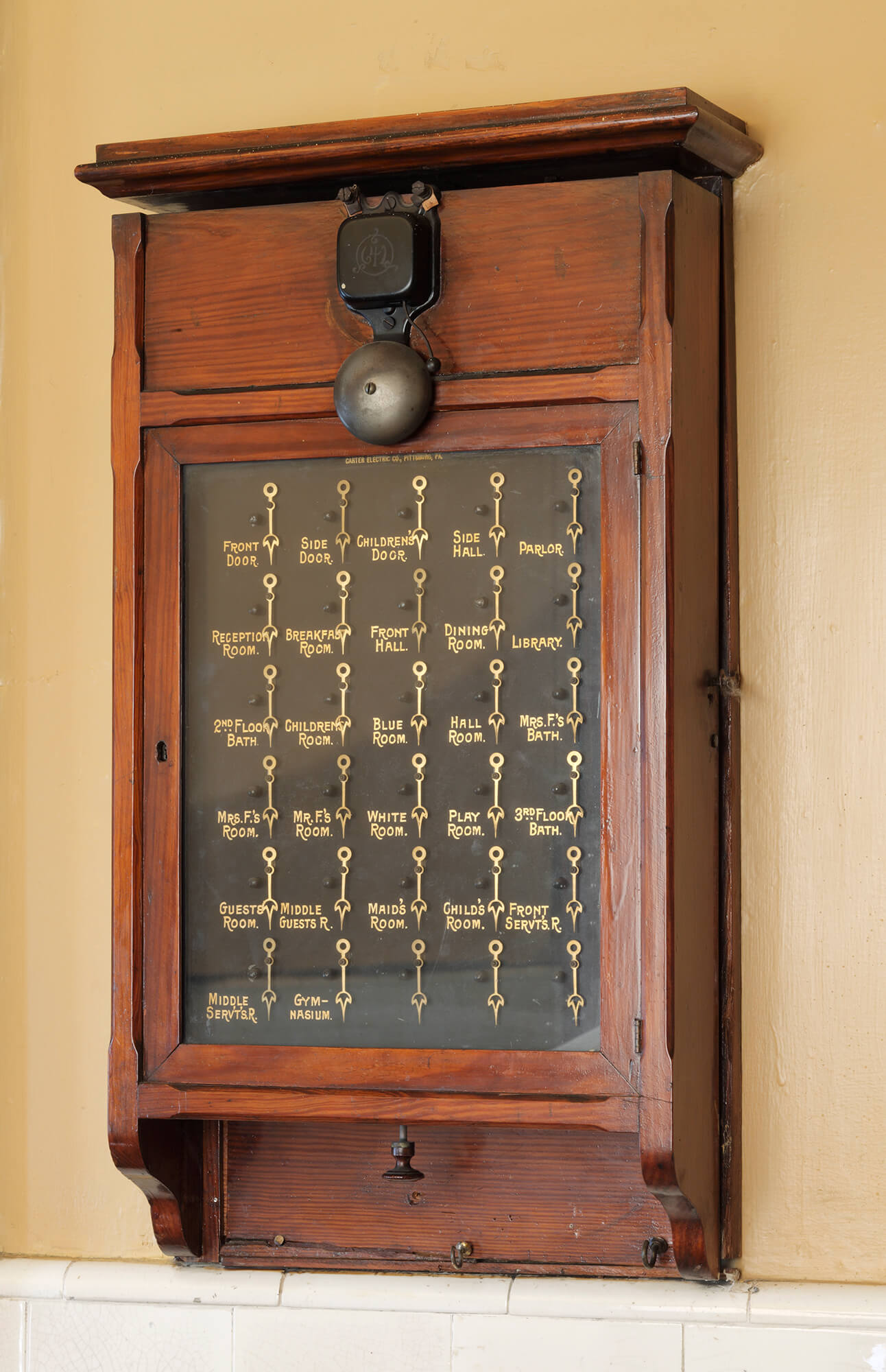 Annunciator in the Clayton kitchen. 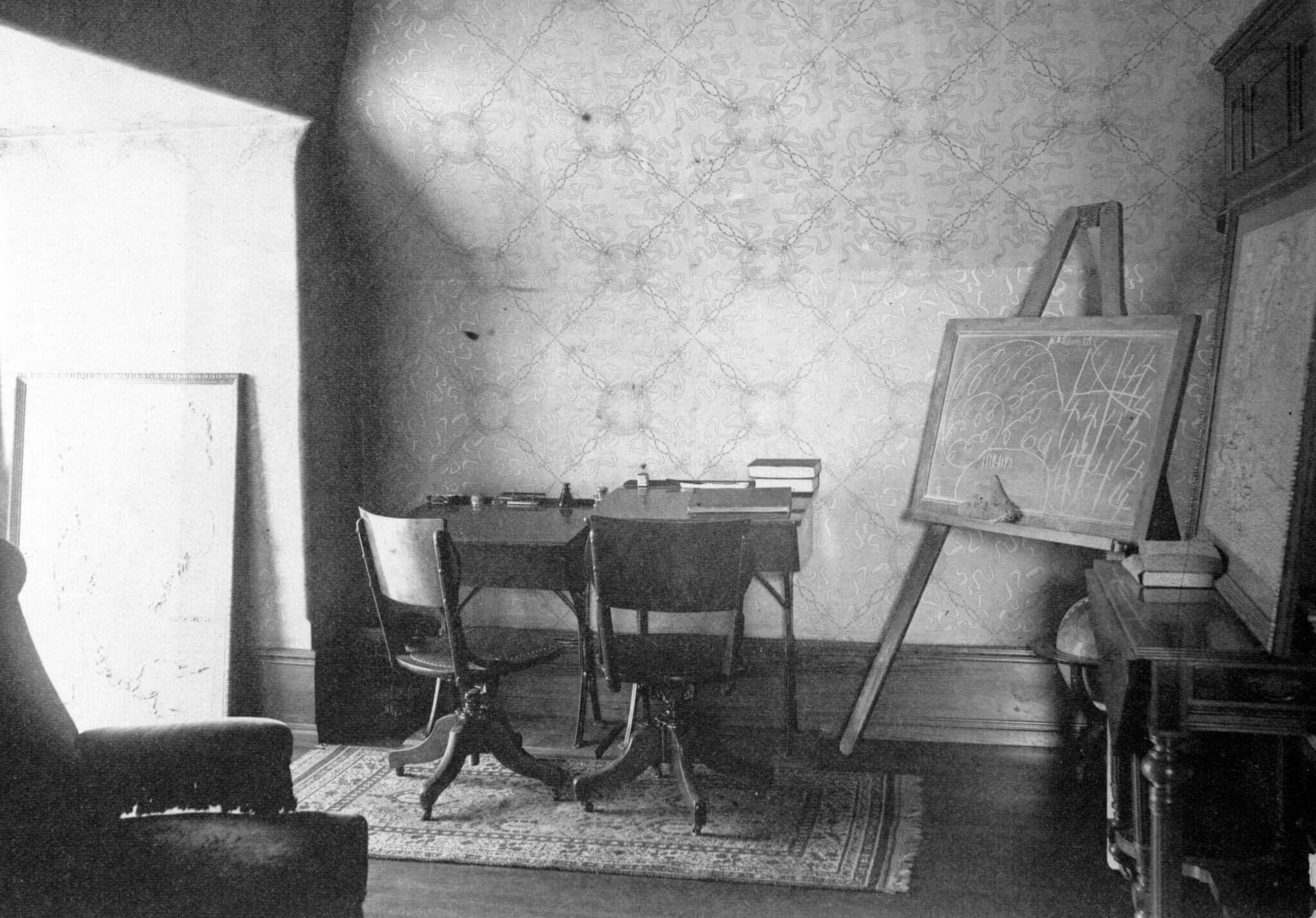 The fourth floor is where Helen Clay Frick received her schooling from governess Mademoiselle Ogiz. There were daily lessons in English, French, grammar, composition, spelling, history, geography, and the basic sciences for Helen and her neighborhood friend Virginia Frew. The girls referred to the space as the Sunnyside School. It had a large window overlooking the stables at the rear of the house. Mademoiselle Ogiz reported on Helen’s academic progress to Mr. and Mrs. Frick on a weekly basis. 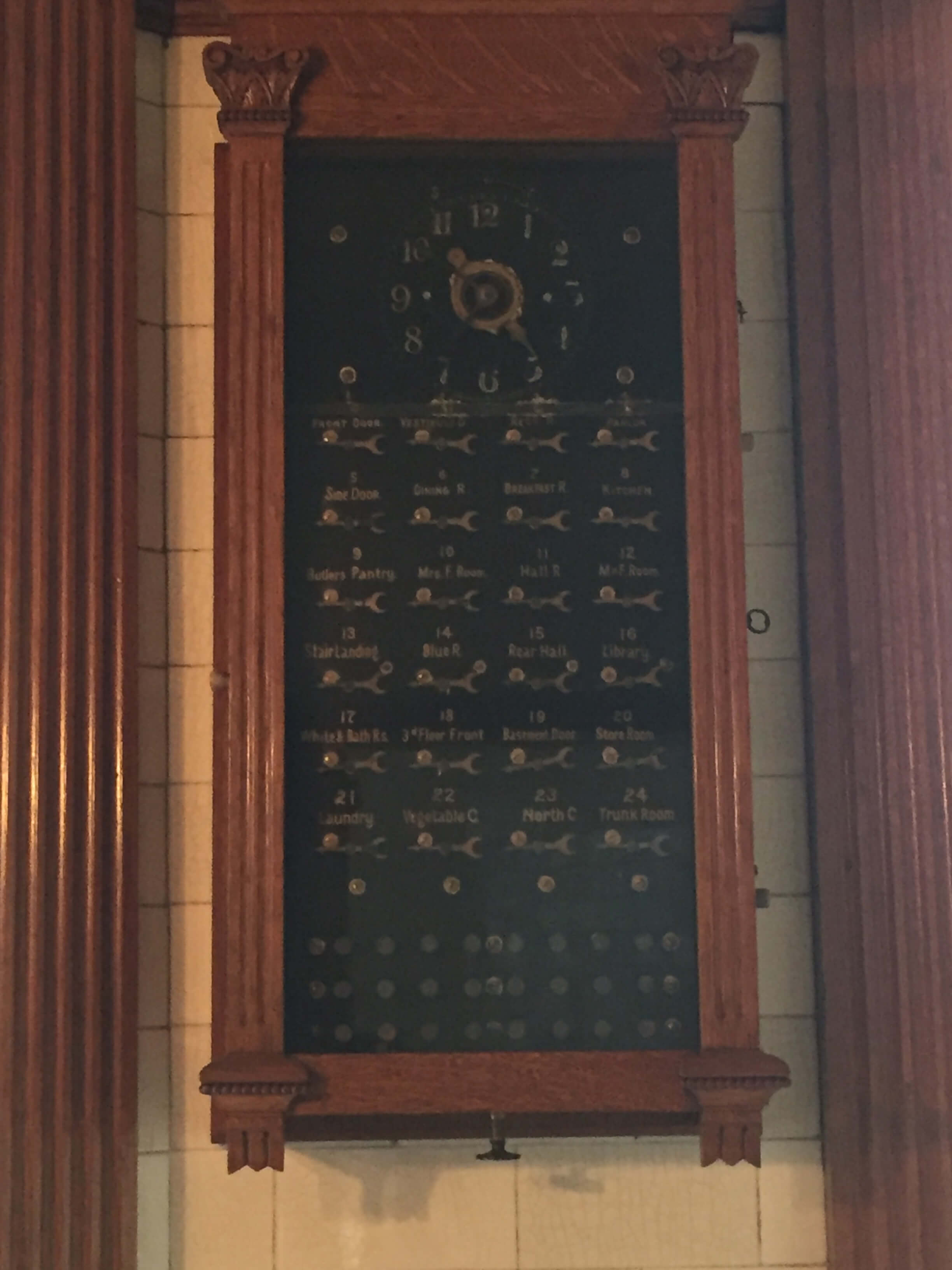 Unfortunately, no images are known to exist of the basement at Clayton. But the annunciator system hung in Mrs. Frick’s bathroom offers some clues as to what was likely in that space—store room, laundry, vegetable cellar, north cellar, and trunk room.

Today the spaces on the upper floors are used to store curatorial supplies and for installation preparation. But like the rest of Clayton, minimal changes were made to the rooms over the course of the twentieth century. The basement, which currently houses maintenance and operations systems, was greatly modified in the 1950s by Helen Clay Frick as she began to think about Clayton’s long-term preservation.

Want to see more images of Clayton circa 1901? You can peruse the entire photo album, and many other resources digitized by the Frick Art Reference Library Archives, here.

Have you always been curious about the history of the house or life at Clayton? Do you want to know more about a particular object or artwork? Let us know and it could be the research focus of a future blog post.