Dressed to Impress: The Conservation of Mrs. Peacock

A stunning Gilded Age portrait is currently on view in the French room at The Frick Art Museum. 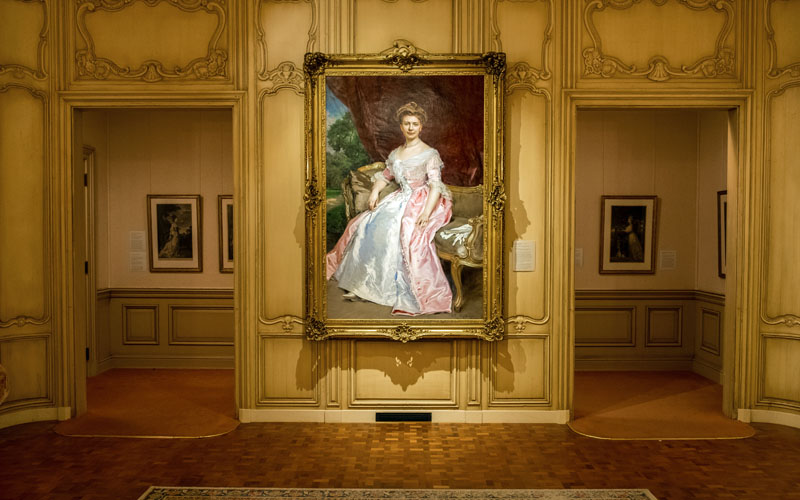 Recent conservation treatments prepared Mrs. Peacock to take the spotlight in a focus installation at The Frick Art Museum. Mrs. Peacock was a noted figure in the Pittsburgh social scene at the turn of the 20th century as the wife of Alexander Rolland Peacock, a vice president of the Carnegie Steel Company. In 1902, the couple commissioned Raimundo de Madrazo to paint their portraits for display in their new Highland Park mansion, dubbed Rowanlea.

The painting eventually passed into the possession of the Pittsburgh History and Landmarks Foundation which gifted the portrait to the Frick in 2000. Architectural historian James van der Trump described it as “showing the erstwhile chatelaine of Rowanlea, enthroned in pink satin, it is an expansive document of Edwardian luxe.”

However, when Mrs. Peacock arrived at the Frick, she was anything but luxe. The painting and frame were in poor condition. Careful conservation treatments were necessary before the artwork could go on display. The goal was to preserve and stabilize the existing elements while helping the artwork look its best with consideration of its age. Two local conservators recently treated Mrs. Peacock to prepare her for the spotlight and restore the painting and its frame to their original splendor.

Both the painting and the frame were covered in 100 years of Pittsburgh soot and grime and had sustained some damage. The canvas was torn and punctured in several places and the deteriorating varnish had cast a yellow pall over the composition. 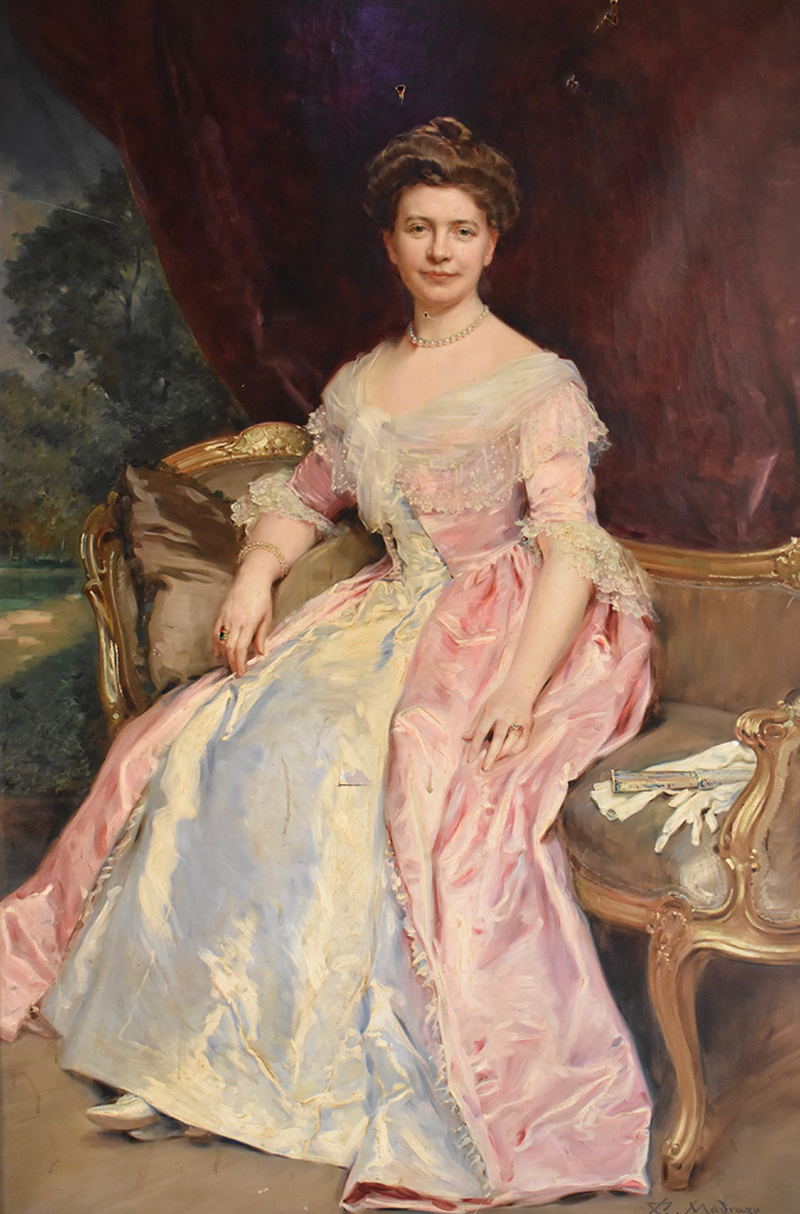 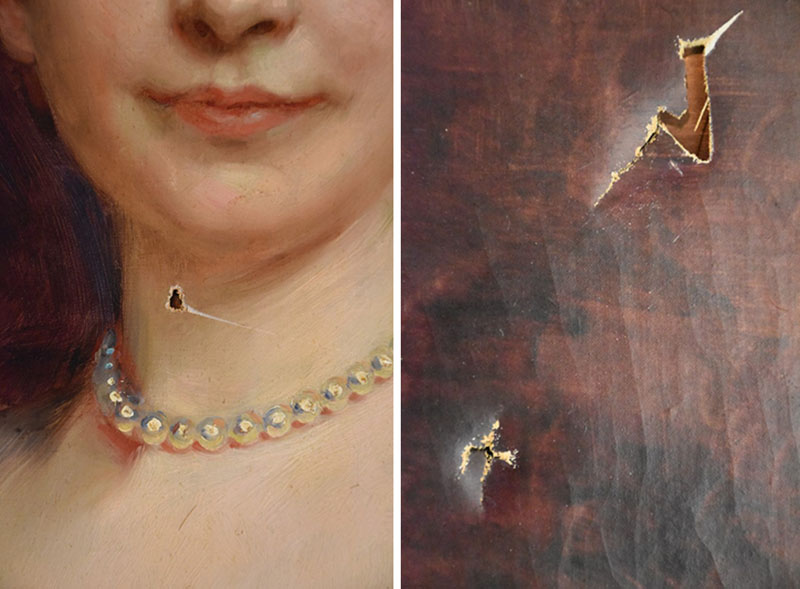 Paintings conservator Christine Daulton handled the treatment of the canvas. She began with a careful cleaning of the surface using a 5% solution of ammonium citrate applied with cotton swabs to remove the surface dirt. The yellowed varnish was then removed with acetone gel.

Left: The canvas after initial surface cleaning. Note the presence of the yellowed varnish.
Right: Cleaned canvas after removal of varnish.

Once cleaning was complete, the painting was placed face down and removed from its stretcher in order to be humidified and flattened. Daulton then mended the tears and losses in the canvas. The canvas was then ready to be inpainted. This painstaking process required layers of gesso putty to build up the surface; the losses were then inpainted so that they are hardly discernable. 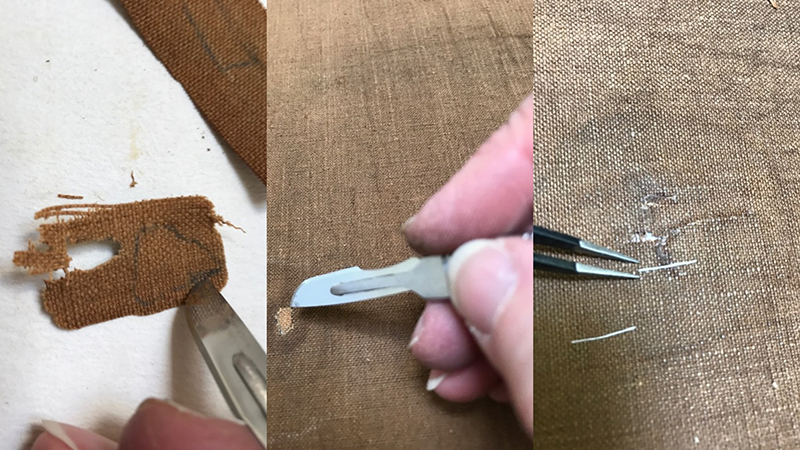 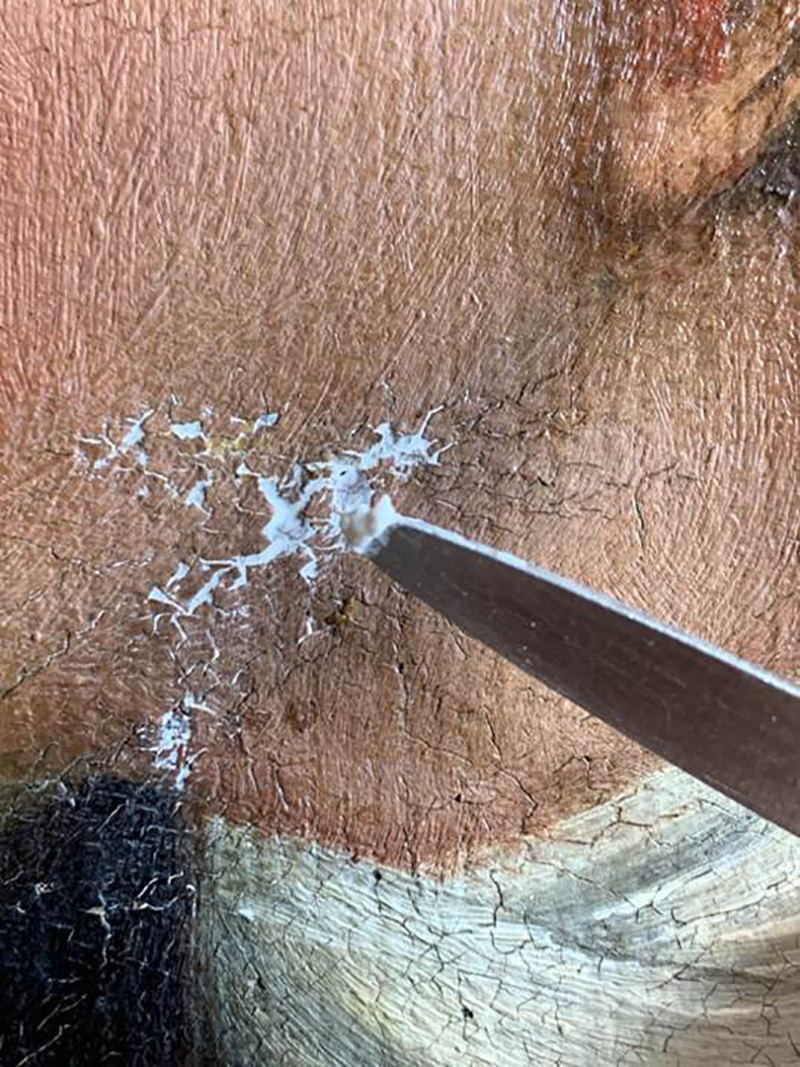 Gesso filling: Filling the losses with gesso to build up the surface of the canvas for inpainting. 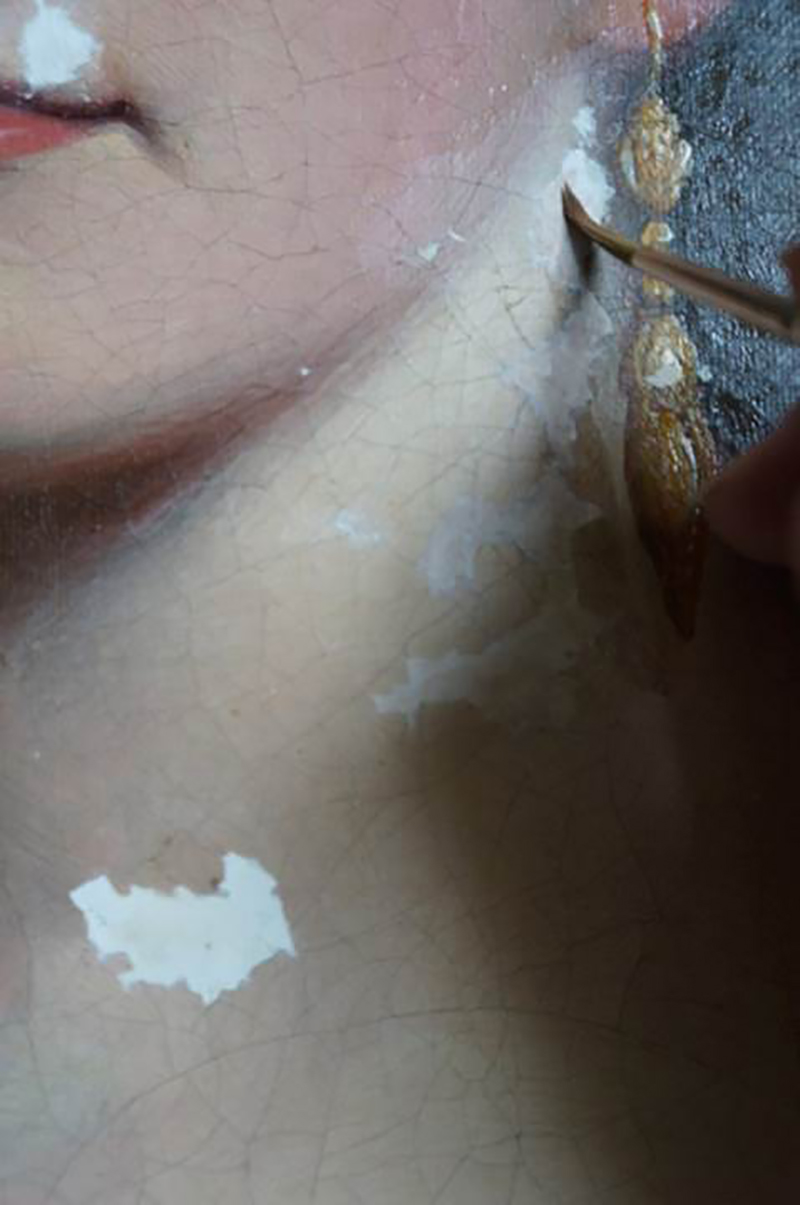 The frame was in similar condition. A thick layer of soot and dust hid a beautifully gilded surface and there were large sections of broken and missing decorative elements, including the central detail at the bottom center of the frame. 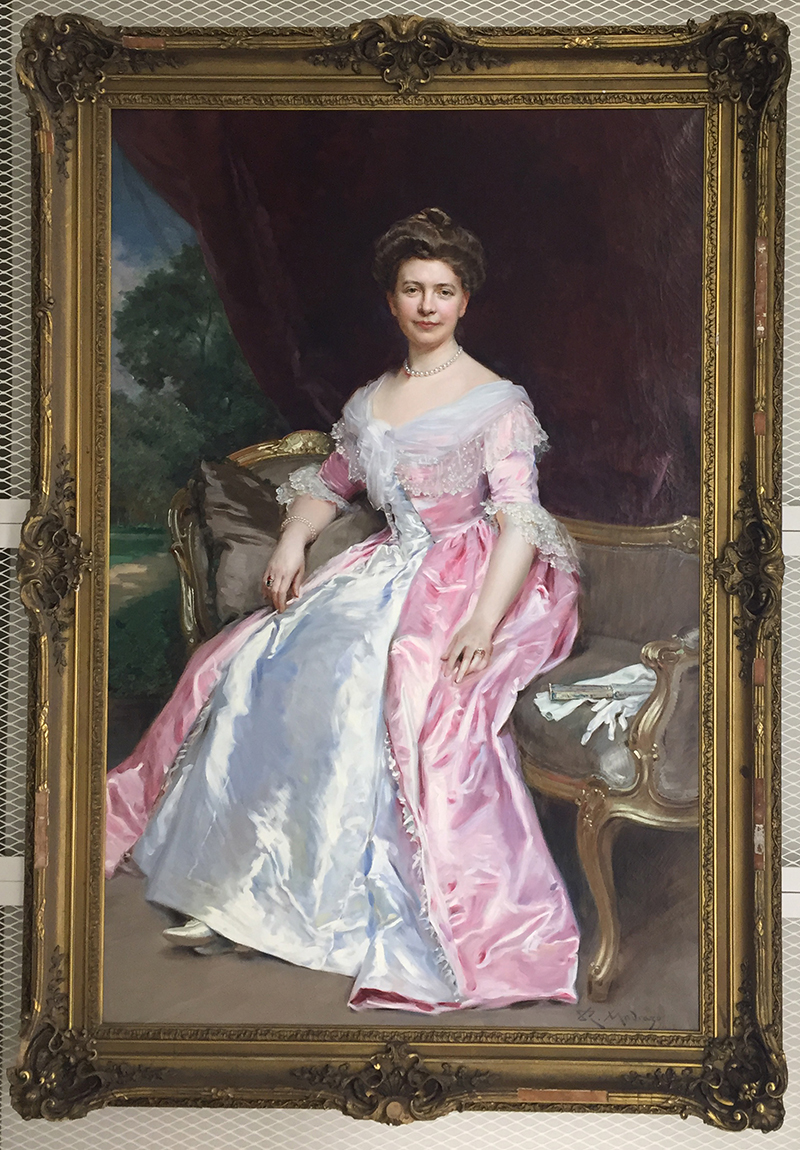 Frame before with details of missing elements. 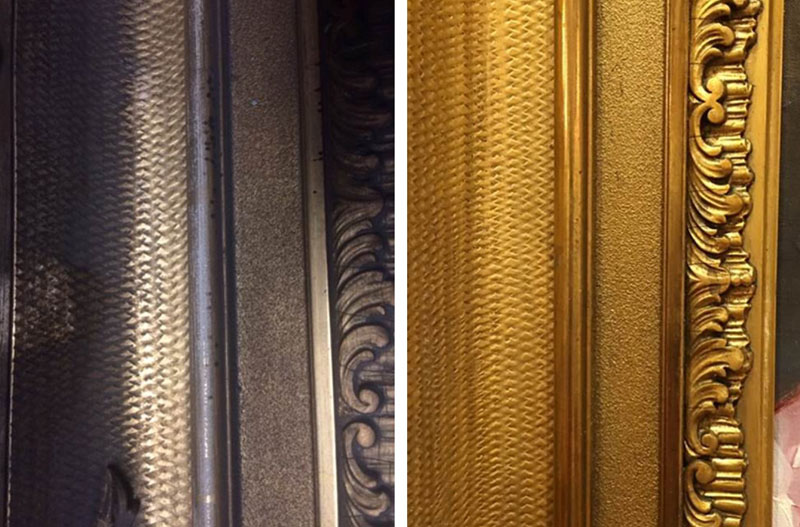 Frame details before and after cleaning

After consolidating and reattaching loose segments, she then worked to recreate missing elements. While several sections were missing, existing pieces could be cast to recreate them. The central detail at the top of the frame provided a reference for the missing bottom detail. All new pieces were adhered to the frame and toned to match the existing appearance. 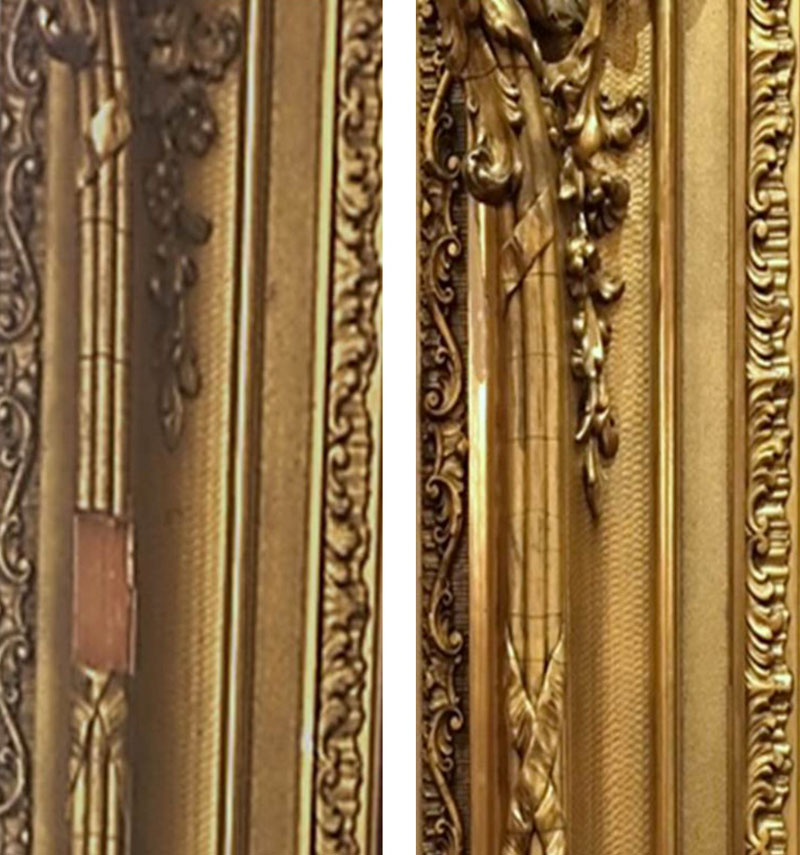 Detail of missing element before and after
The end result was a frame worthy of holding the conserved portrait of Mrs. Peacock and an artwork ready for display in the museum galleries. 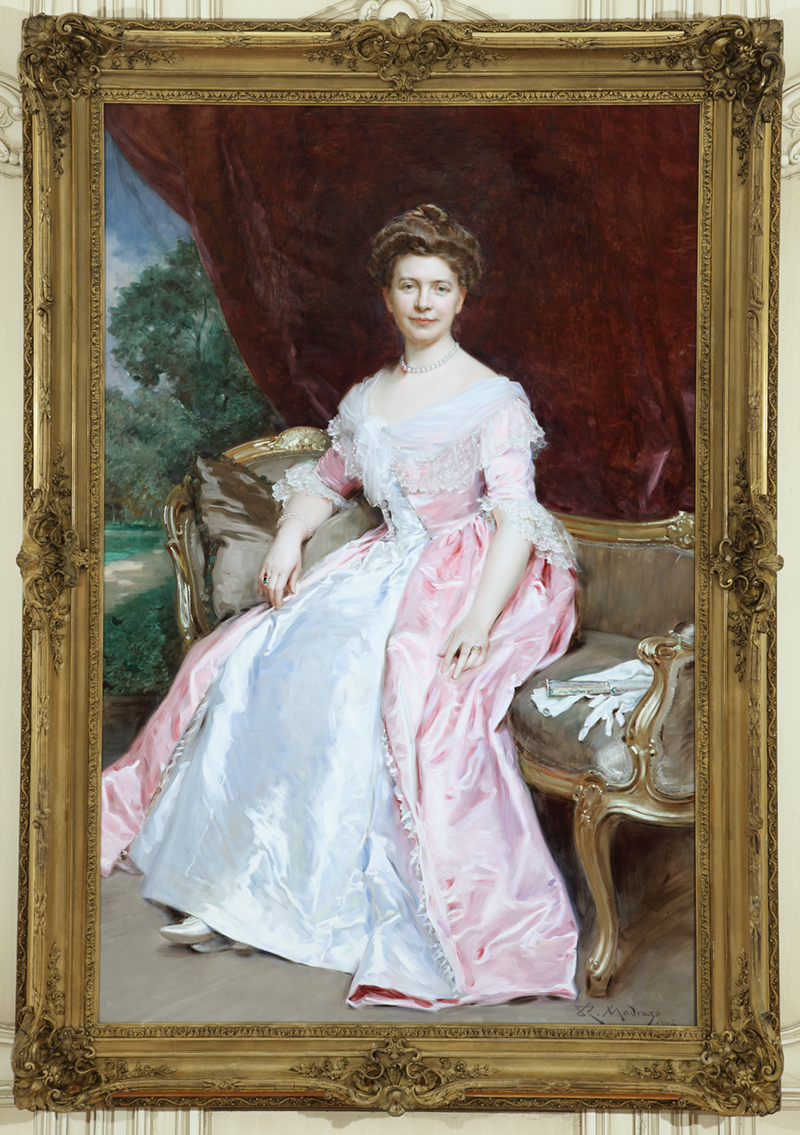 To learn more about Mrs. Peacock and the artist who painted her portrait, read the previous posts in this series:
Meet Mrs. Peacock
Meet Raimundo de Madrazo