Dressed to Kill: A History of British Sporting Fashion

Dressed to Kill: A History of British Sporting Fashion

The Car and Carriage Museum’s current exhibition, The Hunt for a Seat: Sporting Carriages in the Early Twentieth Century, spotlights the vehicles wealthy men and women of the Gilded Age drove for sport and pleasure—like the breaks used for hunting and shooting parties (the name comes from a style of carriage originally developed for breaking horses). Beyond having the proper vehicle, the owners and passengers were also expected to outfit themselves in the proper attire for these outdoor adventures. 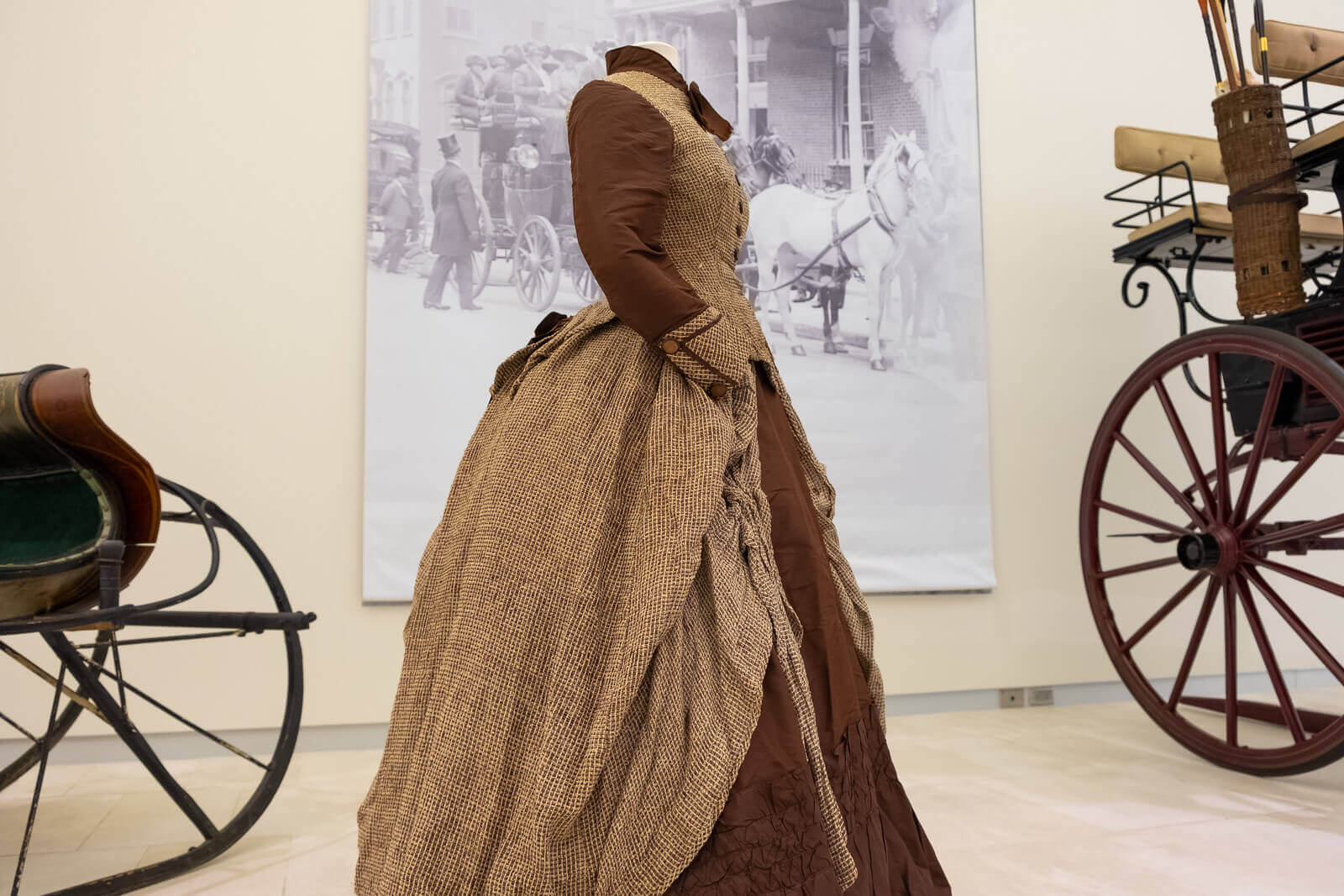 Hunting began as a sport enjoyed by many, regardless of class, but the decline in wildlife populations caused by urbanization led England to pass regulations that prohibited hunting and gun ownership by people who were not landowners. Once a right enjoyed by all, hunting became another indicator of privilege. As industrialization pushed wildlife out of inhabited lands, English forests became the playground for noblemen and noblewomen. Shooting and hunting parties became an important social pastime of the aristocracy.

Shooting Party with Edward Prince of Wales, 1893. Courtesy of The Rothschild Archive.

In the early 1800s, men’s fashion reflected the need for ease of movement, especially in mounting a horse, the most popular way to travel. There was little change to this model when designing men’s hunting attire; the main feature was that it allowed for various body movements. Shirts were longer and looser to accommodate arm positioning during shooting, and breeches—fitted riding pants—provided ample room in the thighs when seated in the saddle. 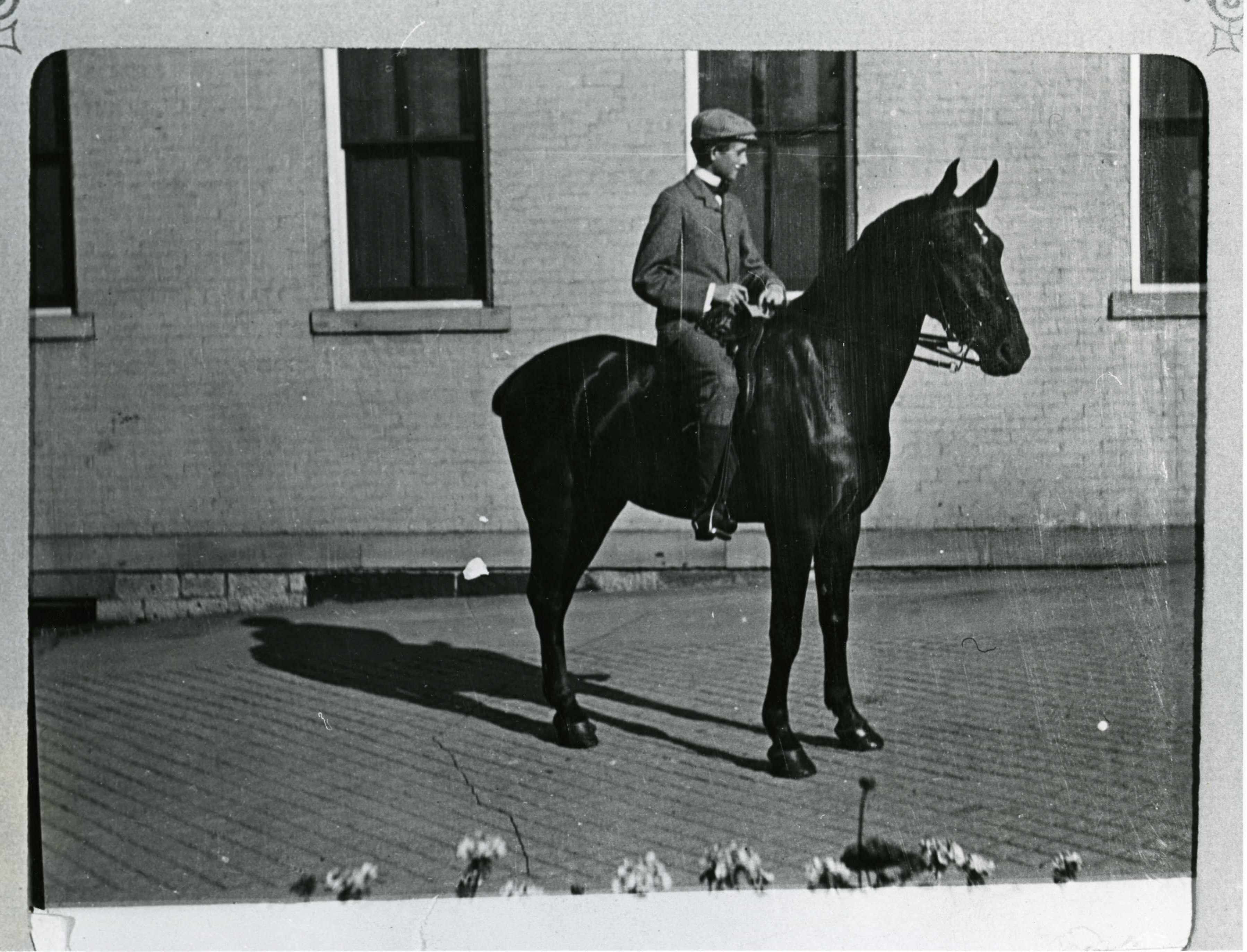 Unfortunately for women, comfort was not a factor in sporting fashion design. Before 1860, women interested in leisure activities were confined to their everyday wear, which consisted of corsets, long skirts that could sweep up dirt and debris, and layers of petticoats. Women, not wanting to wear men’s clothing and with a lack of options from women’s designers, sought tailors to fashion acceptable riding and shooting attire. Later improvements to garments included buttons and straps used to raise hemlines while hiking or hunting, which were lowered when in public to maintain decorum. 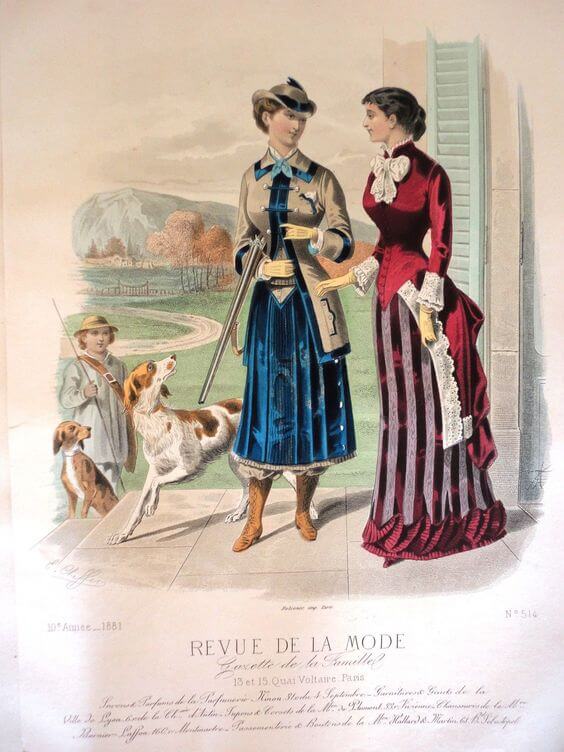 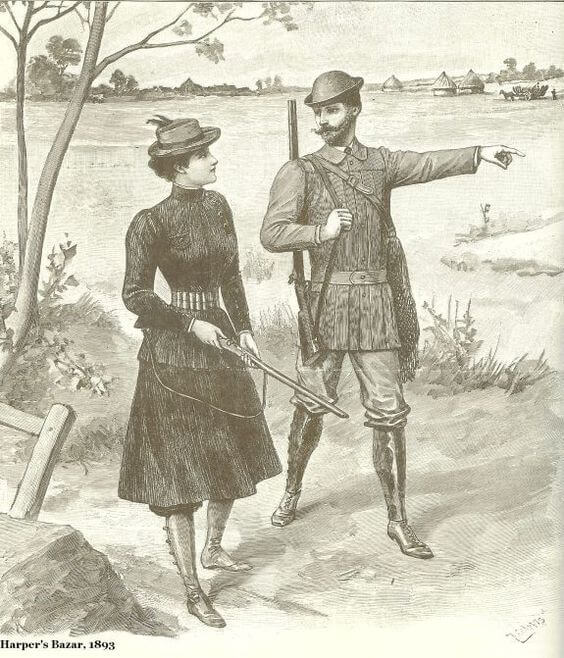 Unlike everyday wear that focused on the tastes of the wearer, sporting fashion was more concerned with practicality and durability. Cotton and tweed fabrics were selected for their resistance to snags from briers and branches while riding. The use of wool also provided added protection and warmth from wind and rain. Jackets and breeches available in shades of light green, tan, and brown helped to camouflage horsehair and dust. Both men and women’s fashions added a band of heavy fabric or leather to the hem to protect the wearer from mud; the extra weight also helped keep the garment in place. 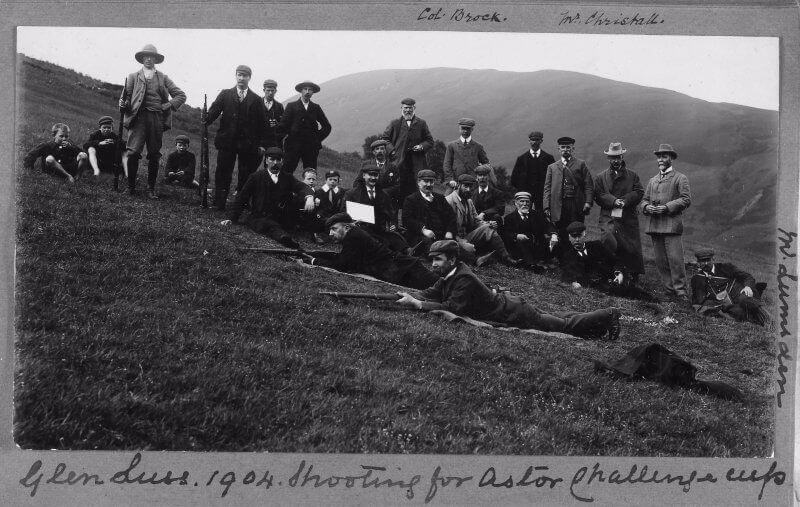 Shooting parties, hosted by the owner of a country estate, were exclusive and extravagant weekend-long events. Select friends and acquaintances were invited to join the hunt, providing an opportunity to discuss business while demonstrating their prowess in the field. These honored guests brought their best-trained gun dogs, were proficient marksmen, and dressed in their finest sporting attire. 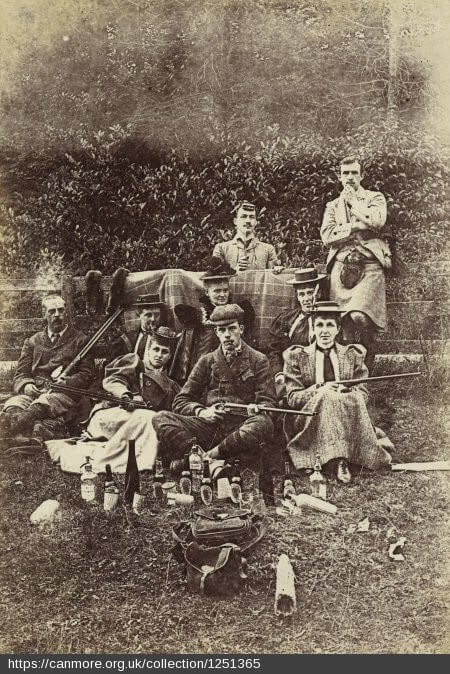 View of shooting party having a picnic, 1894. Courtesy of the Royal Commission on the Ancient and Historical Monuments of Scotland.

There is a distinction in England between hunting and shooting. Shooting refers to stalking and killing fowl—most commonly pheasants, but grouse and ducks were also popular—with guns. The gamekeeper—an employee of the estate responsible for wildlife conservation—organized the shoot. In the field, beaters, along with the gun dogs—pointers, setters, and spaniels—drove the game out of the brush. Gunners—the most skillful shooters— then took their shot at the bounty retrieved by the dogs. 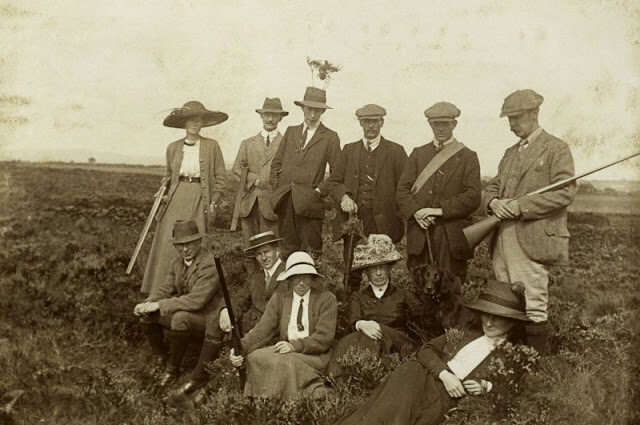 'Pearsons, Bells, Watsons on the Williamwood Moss', 'The glorious 12th, 1912'. Courtesy of the Royal Commission on the Ancient and Historical Monuments of Scotland.

The Norfolk jacket, with its box pleats and large patch pockets, was the most popular style among shooting enthusiasts. A belted jacket made of tweed or Shetland wool, the Norfolk could be tightened at the waist and wrists to protect against blustering winds. The jacket allowed a wide range of motion when firing, and the oversized pockets were used to carry cartridges and other hunting accessories. Additionally, the vented back and curved front seams of the jacket allowed water to run off when mounted. The jackets were so popular that close-fitting tailored versions were created for women to wear in the field as well. The look was completed with a hat; a tweed flat cap or deerstalker was often popular. 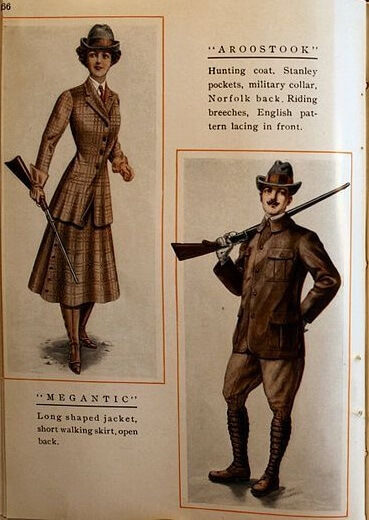 Hunting differs in that the game—rabbits, foxes, and stags—is larger, and the prey is stalked by hounds who hunt by scent. Some common hound breeds include bloodhounds, beagles, and, of course, foxhounds. 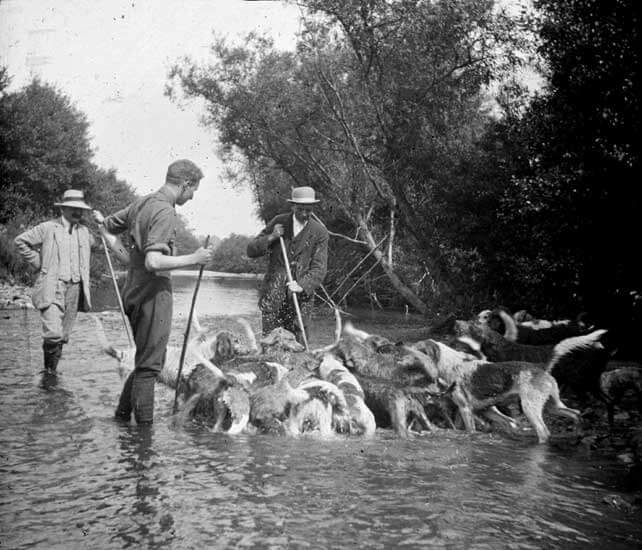 Hunting, and in particular fox hunting, was a pastime associated with the upper class. The cost to purchase and maintain a good hunting horse and the means to properly dress for the hunt were luxuries afforded by only the very wealthy. Early hunts varied in their insignia and color choices; some popular options were dark blue, green, and brown. Hunting pinks, scarlet woolen coats with velvet trim, now the most recognizable feature of the foxhunt, did not become the standard until the 1850s. 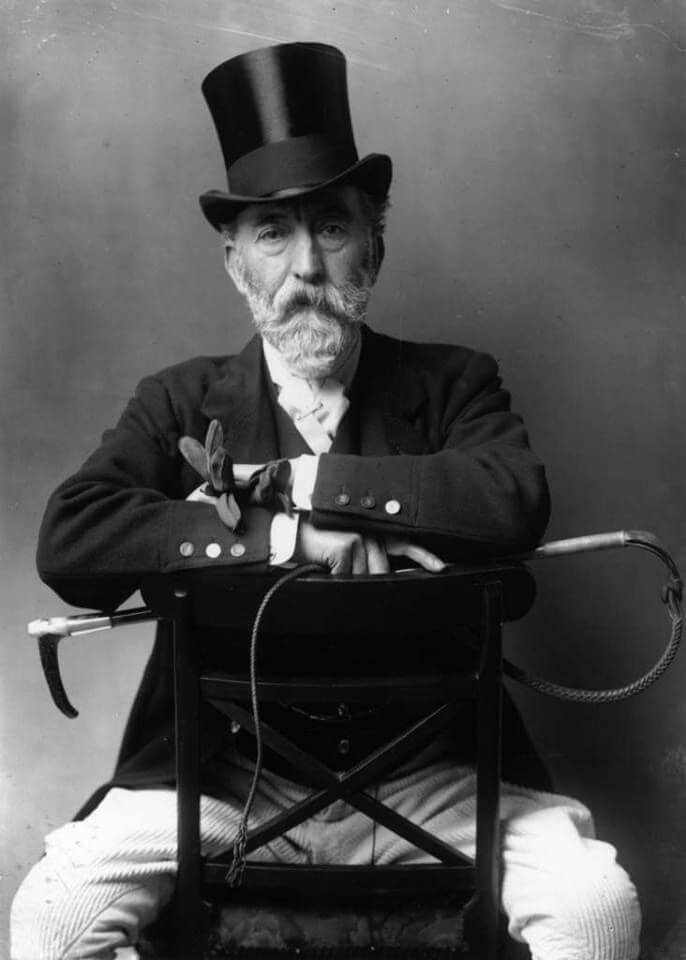 It is unclear how pinks became the name associated with this garment. Some believed it referenced the color of British uniforms following a military campaign—the red coats fading to a pinkish-brown. Others alleged the frock coat was named for English tailor Thomas Pinque (Pink). Pinks were reserved for the master of the fox hounds, the huntsman, the whippers-in, and former masters, making pinks the second most coveted thing on the hunt, after the fox. As a sign of appreciation, members of the hunt could award pinks or “colors” to riders who were active in the organization and assisted with many hunts, those who had several years of experience or demonstrated unwavering loyalty to the club. For those members of the hunt who were not awarded colors, attire was similar to clothing usually worn for riding, but adapted for comfort and convenience. Men were expected to wear a hacking jacket, waistcoat, light-colored breeches, tall boots, stock tie, and a bowler or top hat. 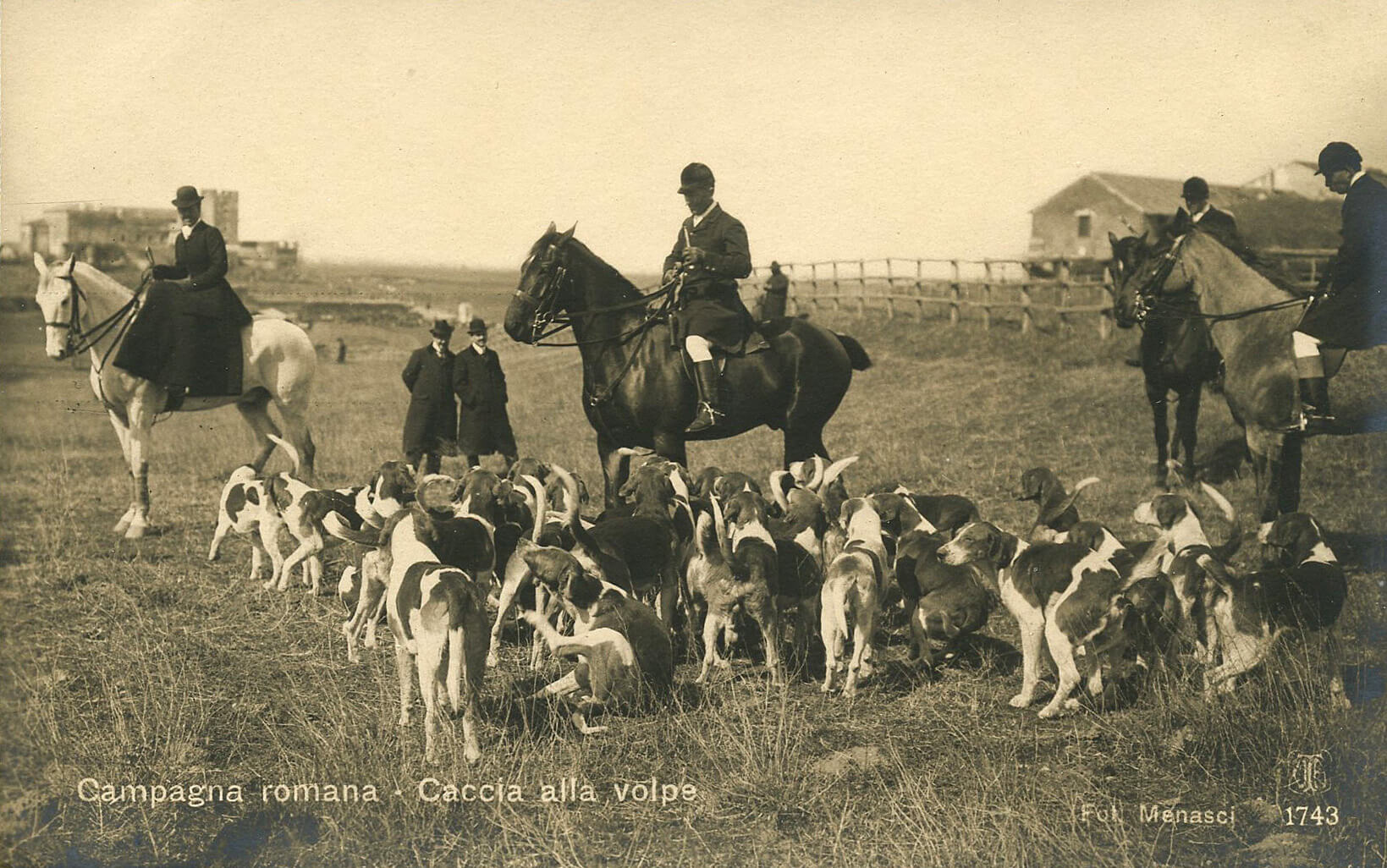 Once again, comfort was not a consideration in women’s riding fashion. Until the 1930s, women were expected to ride sidesaddle while sporting a riding habit during a hunt. A three-piece ensemble consisting of a fitted jacket, long skirt, and breeches, the riding habit allowed women to participate in riding sports while still maintaining their modesty and virtue. However, both the sidesaddle and the riding habit limited the rider’s range of motion. The excessively long skirt was known to get caught up in the reins or on the saddle, and in instances of a fall could cause injury and even, occasionally, death. In the 1890s, “safety skirts” were introduced to prevent these types of injuries. The skirt featured an apron front with snap closures in the back that would break away in the event of a fall, exposing the rider’s breeches, sullying her dignity, but maintaining her modesty. As women’s fashion restrictions lessened in the 1920s, more women chose to ride astride while sporting breeches or jodhpurs with their tailored hacking jackets and bowler hats. 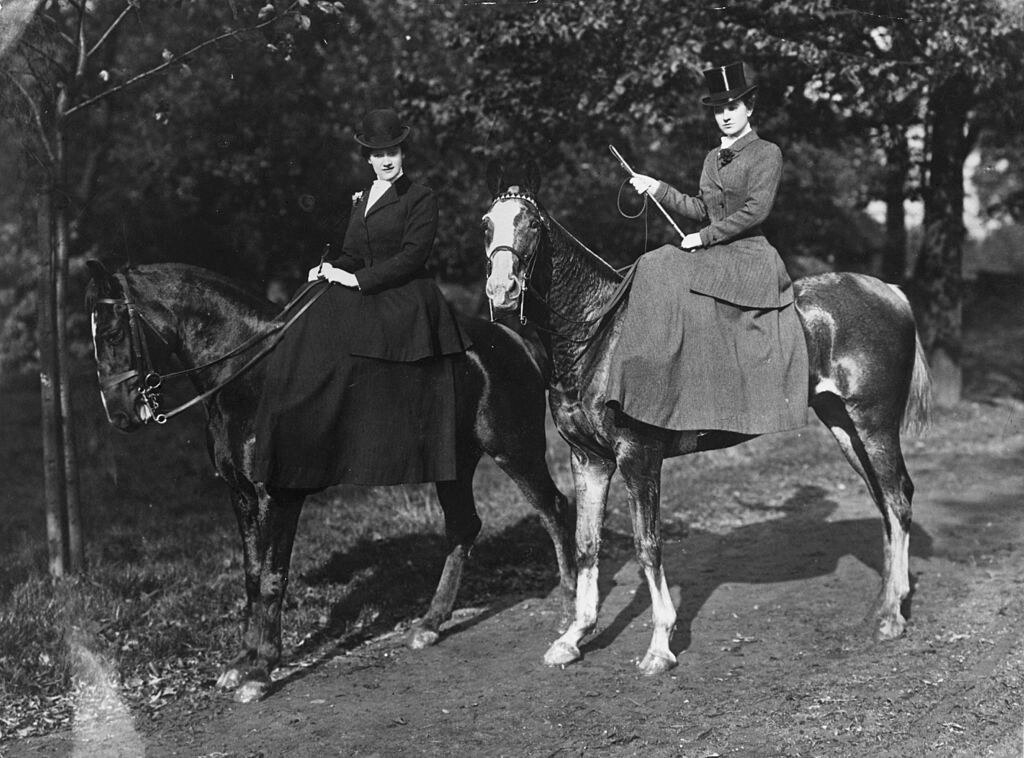 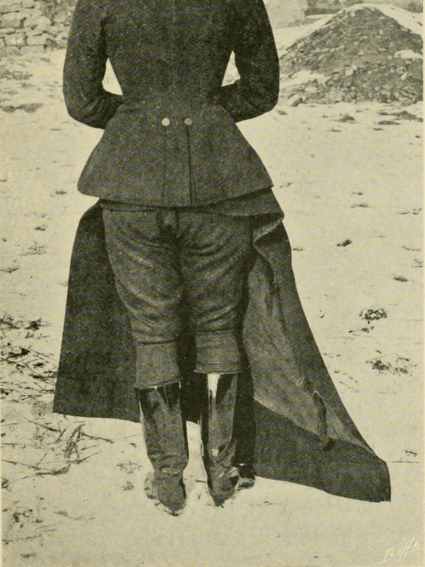 Apron skirt, open for mounting, 1903. Courtesy of The Horsewomen: A Practical Guide to Side-Saddle Riding by Alice Hayes, figure 35, p. 97. 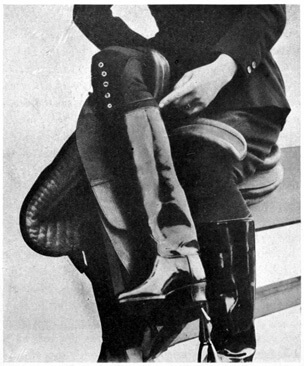 Hooked back leg, the direction of the pressure of which is shown by the fore finger of the left hand, 1903. Courtesy of The Horsewoman: A Practical Guide to Side-Saddle Riding by Alice Hayes, figure 80, pg. 151.

The Hunt for a Seat: Sporting Carriages in the Early Twentieth Century will be on view at the Car and Carriage Museum through November 3, 2019.

Vic. “The Fox Hunt: From Downtown Abbey back to its origins.” Jane Austen’s World, 16 Jan. 2011. https://janeaustensworld.wordpress.com/2011/01/16/the-fox-hunt-from-downton-abbey-back-to-its-origins/

Previous Story: The Frick in Your Neighborhood: Community Outreach Events
Next Story: Memory and Mourning: Death in the Gilded Age