A new tour at Clayton this fall will explore grief and mourning practices in Victorian era America.

Death was a more commonplace reality for people living during the late 19th century. Lack of accurate knowledge about common diseases and how to treat them contributed to high mortality rates, particularly for young children. Henry Clay Frick and his wife Adelaide experienced great loss during their time living at Clayton, including the loss of two of their four children.

During the late 1800s, a strict code of etiquette governed social behavior, particularly for the upper classes, and this included how to grieve a loved one. Mourning was a public and highly visible ritual, compared to today. Following the prescribed customs was an expression of one’s social position and status, thereby serving as a demonstration and affirmation of one’s gentility and respectability. One of the most outwardly conspicuous signals of mourning was dress. Donning black attire served as a symbol of one’s inner sorrow and was a mark of respect to those lost. 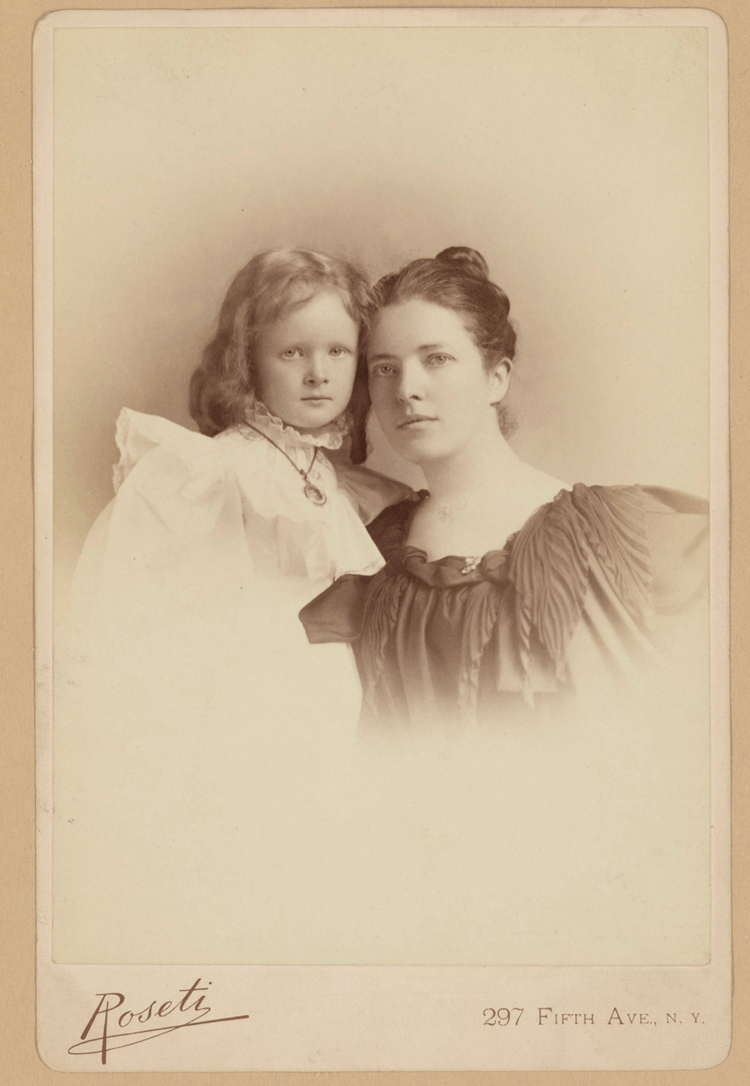 During the 1890s, Adelaide Frick was photographed in mourning dress with her daughter Helen. Her hair is pulled back in a simple updo; she wears no jewelry or ornamentation, save a small pin adorned with seed pearls. Her dress is made of a dull black fabric with no sheen, trimmed with black crape. Beside her, Helen wears a white dress and a locket containing a picture of her departed sister.

Formalized mourning rules proscribing behavior and dress were expounded upon profusely in etiquette guidebooks of the period. This burden fell most heavily on women, who were considered more pious and moral. Grief was an expression of sentiment and emotion and therefore considered part of the women’s sphere. Etiquette for men was less rigorously defined. Women typically followed these standards to the best of their ability, depending on their financial status, social class, and disposition. 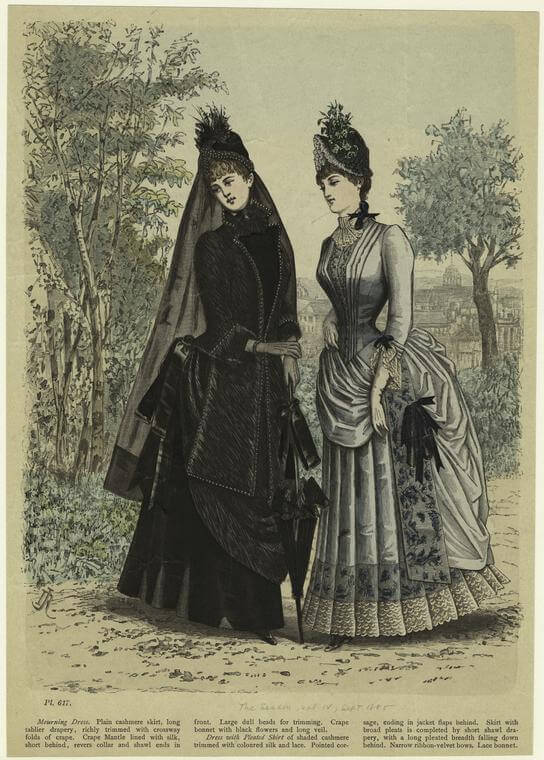 There were generally three stages of mourning dress: deep mourning, ordinary or second mourning, and half-mourning. In deep mourning, the bereaved wore dull, lusterless black fabrics, such as crape or wool, with crape trimmings (undergarments remained white). Ordinary mourning introduced black silk, trimmings, and ornamentation, including jet beading. Jewelry was permitted during this stage, as long as it remained understated and refined. Half-mourning consisted of gradations of gray, purple and lilac, or combinations of black and white. As one etiquette book put it, “The discarding of mourning should be effected gradually. It shocks persons of good taste to see a light-hearted widow at once jump into colors from deep black downing as though she had been counting the hours. If black is to be dispensed with, let it be slowly and gracefully, marked by quiet unobtrusiveness.”1 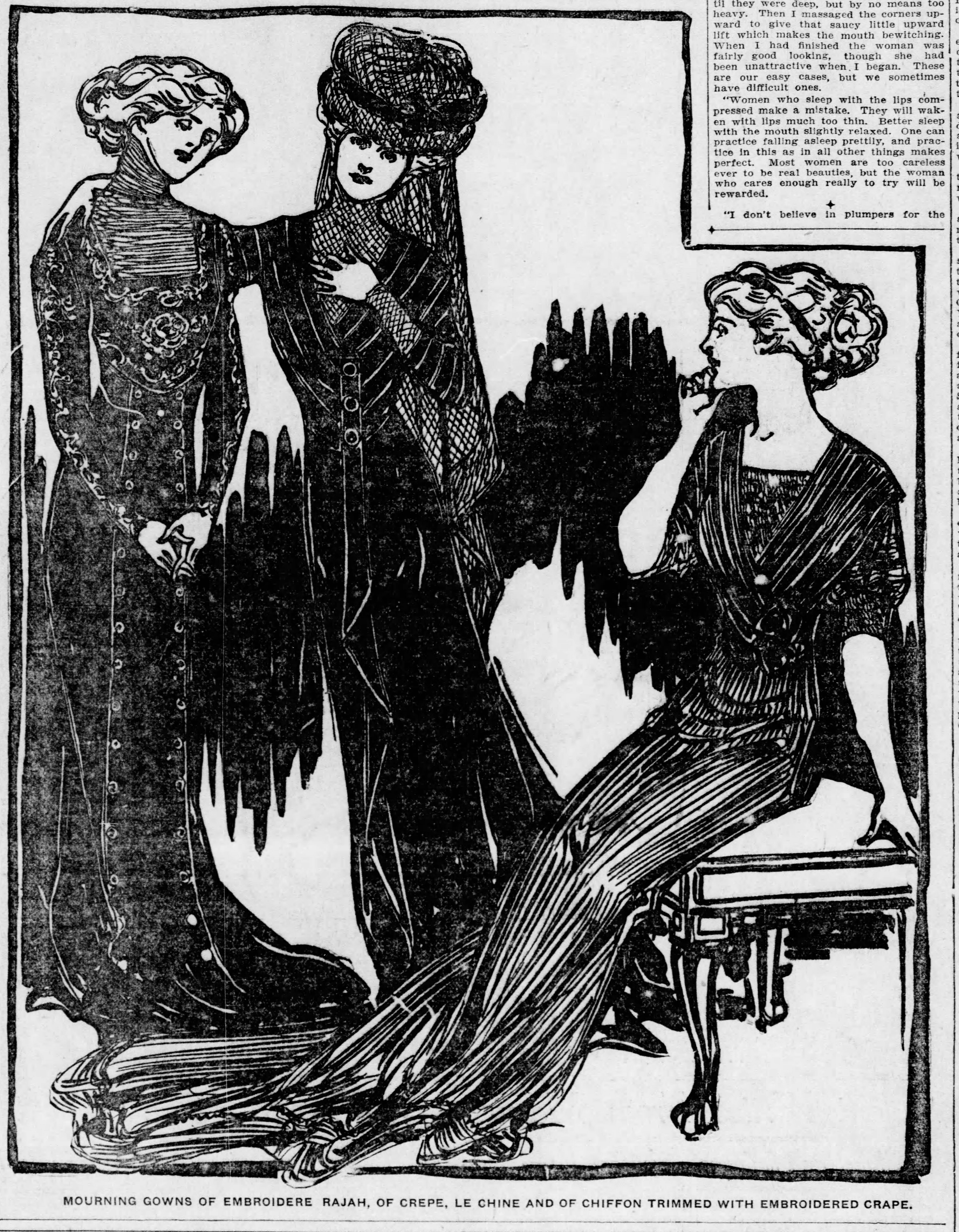 The time spent in each state varied based on the relationship of the wearer to the deceased, and could last from three months to two and a half years. A widow mourning her husband was most constrained by societal expectations, encouraged to remain in deep mourning, which included donning a full-length black veil when in public, for at least one year. Some widows opted to remain in mourning for the rest of their lives, emulating Queen Victoria who dressed in black for the remaining forty years of her life following the death of her husband Prince Albert in 1861. The recommended length of time for mourning a parent or child was one year, six to nine months for a grandparent, and six months for a sibling.

By contrast, men had it much easier. Widowers mourned for up to six months and often even less. They were encouraged to remarry more than widows. As the standard black suit was already de rigueur, men could meet the standards of mourning dress with very little change to their everyday wardrobe. Crape hatbands or armbands, particularly for men in the service, were also common. 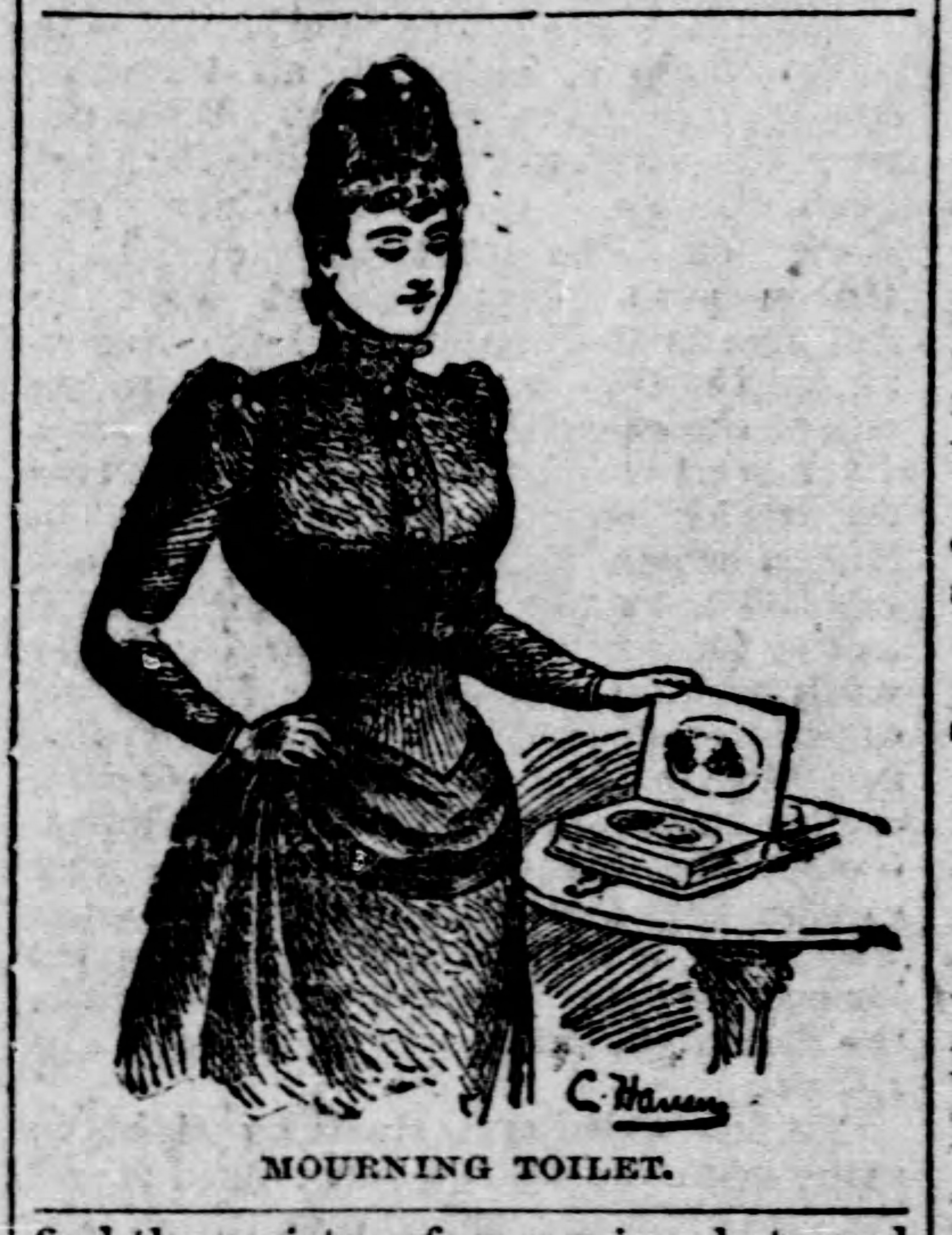 Children were generally not put in black. One article in an 1890 issue of the Pittsburgh Daily Post cautioned, “It injures the health and spirits and one has no right to keep them under a cloud. For toddling children, mourning dress is nothing short of heathenish.”2 If mourning dress was desired, guidebooks encouraged white clothing with black sashes, armbands, or dark velvet trimmings. Many critics worried about the emotional effects on children of being surrounded by black and often encouraged parents mourning a child to lighten their mourning dress as soon as possible “for the sake of the survivors.”3

One of the major criticisms against mourning dress was the great expense. This elaborate practice was restricted only to the very wealthy. In her memoirs, Annie Stephany, a family friend of the Fricks, recounted the Frick family traveling to New York after the death of Martha and outfitting the entire family, including Annie, in mourning clothes. Most people did not have that luxury, although they participated as best they could with the resources they had. They might dye or alter existing garments. Some women might have a few key mourning pieces, including a crape  overskirt or jacket, that could be worn over usual clothing. 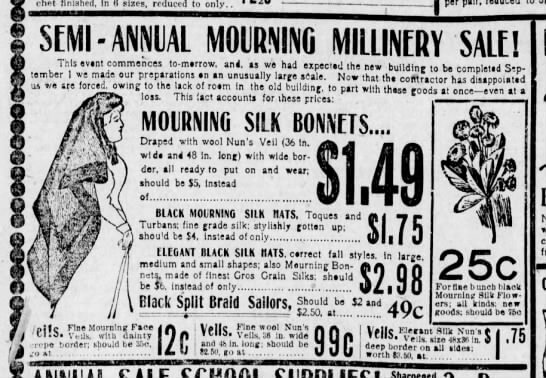 By the early 1900s, the rules on mourning dress were loosening, with greater latitude granted to individual preference. “The number of people who find the wearing of crape or of any outward badge of unhappiness repugnant to their feelings increases yearly.”4 In addition to the expense, dress reform critics argued that the prolonged wearing of black had a pronounced and depressing effect on the wearer and called attention to one’s grief, something a mourner might wish to keep private. By the onset of World War I, many of the elaborate mourning rituals of the previous era had vanished. Even so, Adelaide and Helen were described as “heavily veiled” when they arrived in Pittsburgh for Henry Clay Frick’s funeral in December 1919.5 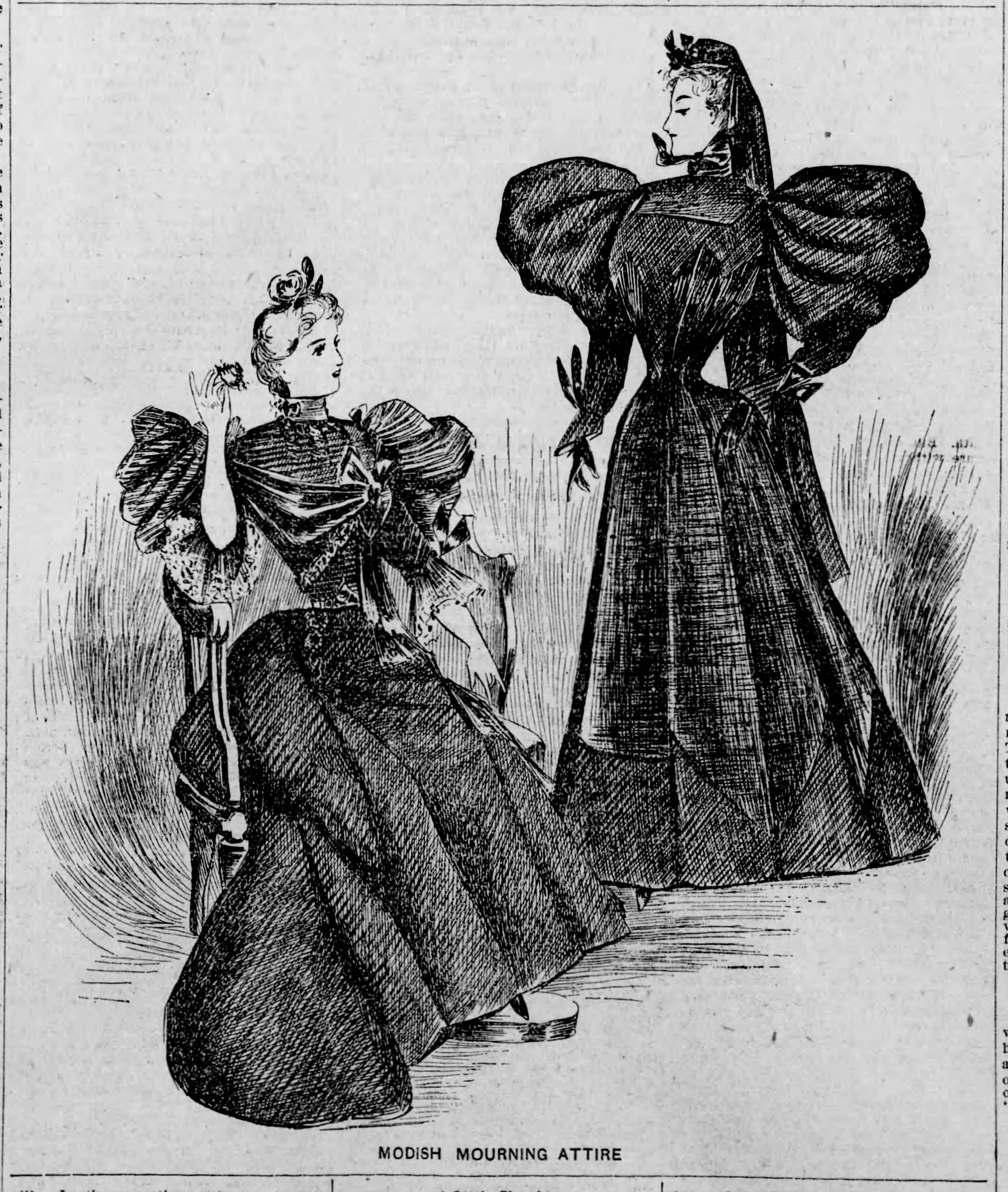 Learn more about mourning dress and other social customs and rituals related to sentiment and grief during a special tour of Clayton. Memory and Mourning: Death in the Gilded Age runs from September 17 through November 10, 2019.

Previous Story: Dressed to Kill: A History of British Sporting Fashion
Next Story: The Frick Pittsburgh is testing out a new collection app!