While A Sporting Vision: The Paul Mellon Collection of British Sport Art fills our temporary exhibition galleries with immersive views of English country life, be sure not to miss three exemplary works of British art installed in the permanent collection gallery adjacent to the exhibition. I love all three of these paintings, as examples of 18th-century British painting, as glimpses into three artists' distinct approaches to portraiture, and as insight into personalities of the day.

Let’s look at them in chronological order, beginning with William Hogarth’s Portrait of the Honorable Captain John Hamilton, c. 1740.

Known for his satirical paintings, drawings, and prints, including A Rake’s Progress and Marriage à-la-Mode, William Hogarth also used his psychological insight to great effect in portraiture. Between 1738 and 1743, he focused on cultivating commissions for relatively small-scale portraits, which were in great demand by the rising middle class. 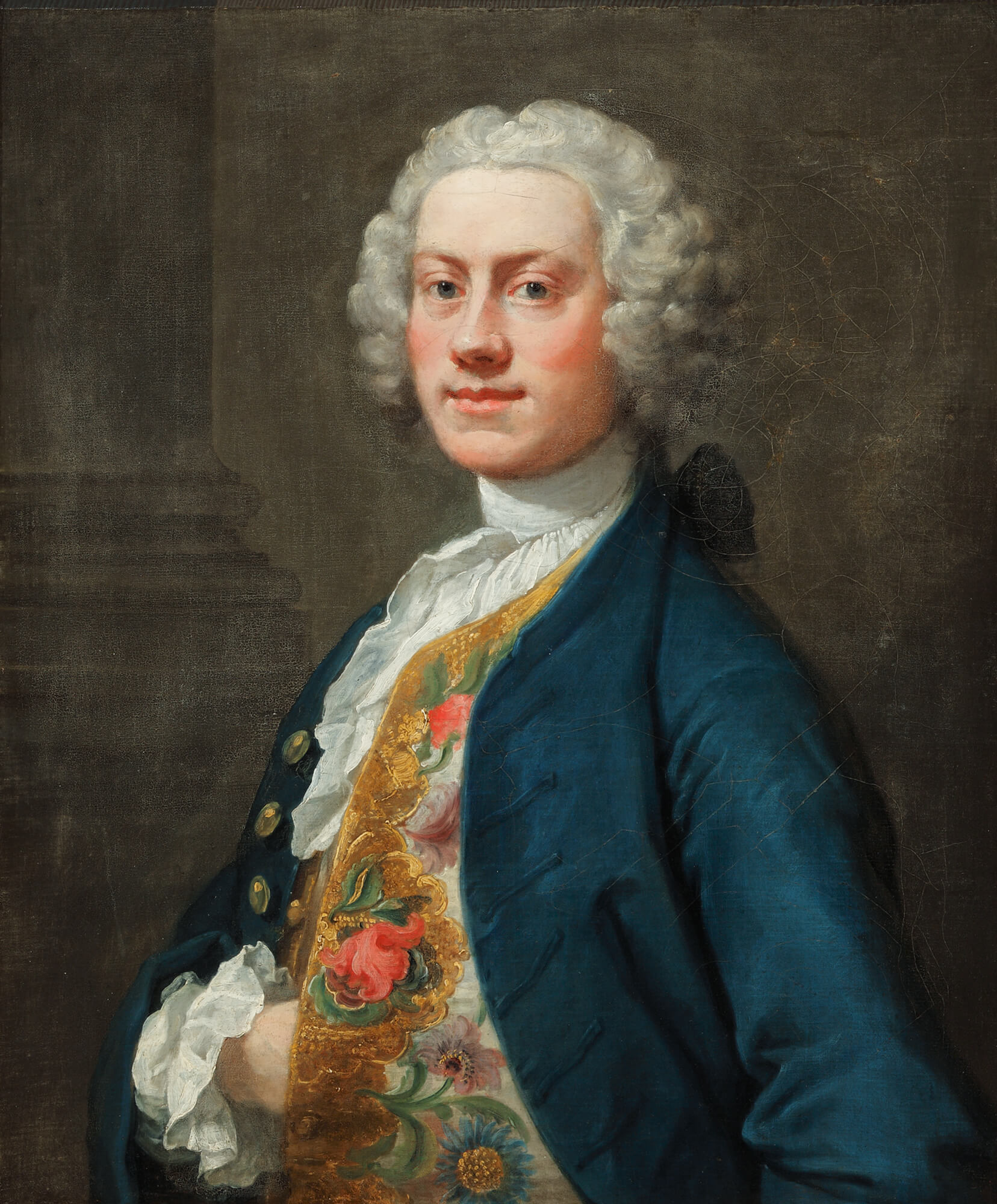 Hogarth’s portraits were typically of clergymen, professionals, and merchants; only rarely did the aristocracy sit for him. The subject of this portrait, John Hamilton (b. 1713/14), was a captain in the Royal Navy who was also painted twice by Sir Joshua Reynolds. Here, Hamilton’s confident posture, accented by his unbuttoned coat and forthright expression, creates a powerful, individual presence. The direct, unassuming portrayal is enlivened by lovely, painterly passages—on his waistcoat, which is lavishly embroidered with flowers and gold, and in the frothy white ruffle of his jabot.

Hamilton drowned off the coast of southern England on December 18, 1755, in a rocky area that has since been called Hamilton Shoal. The Hamilton family retained the portrait until the early twentieth century. Acquired by Henry Clay Frick the year before his death, this painting was part of a group of artworks, including a number of fine English examples, purchased from Mrs. Walter Rathbone Bacon (originally part of her brother-in-law Edward R. Bacon’s collection). It was then installed in the Frick’s summer home in Massachusetts, and brought to Pittsburgh by Helen Clay Frick in 1952.

While enjoying the A Sporting Vision exhibition, keep Hogarth’s work in mind when you come to John Collet’s painting, "The Joys of the Chase," or, "The Rising Woman and the Falling Man." Greatly influenced by the satirical observations of Hogarth, John Collet was extremely successful in his lifetime. Although his work focused on the humorous and satirical, it also provides rich insights into the fashions and foibles of his times. 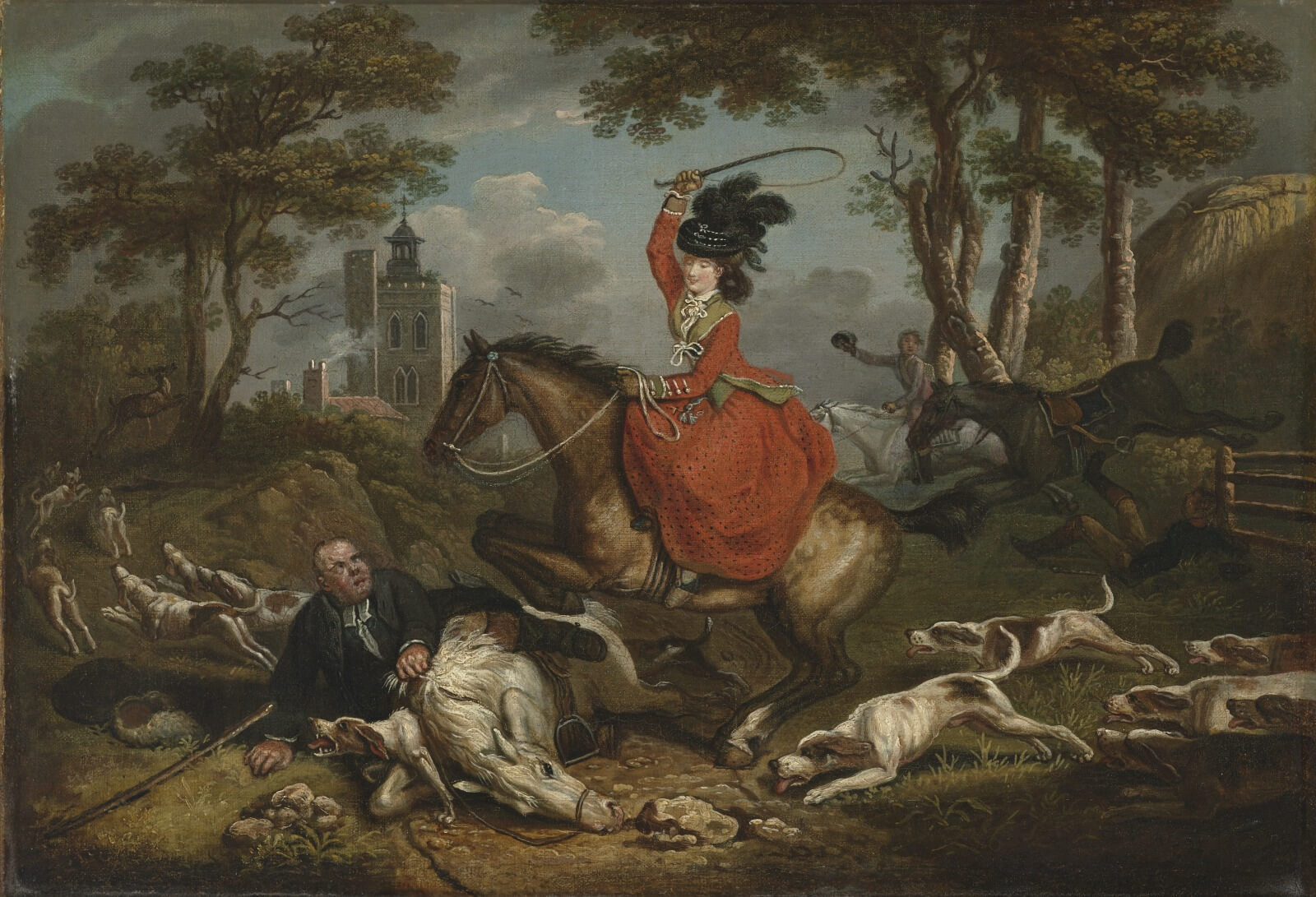 Next up in our look at British paintings from the permanent collection is Arthur Devis’ Sir Joshua Vanneck and Family at Roehampton House, Putney, completed in 1752. This painting depicts the Vanneck family on their estate along the River Thames. Arthur Devis specialized in "conversation pieces," group portraits that were meant to appear more natural than formal portraiture, often depicting family members relaxed at home, or grouped outdoors. (Sporting art sometimes enters the realm of the conversation piece by featuring families grouped on horseback. George Stubbs painted a number of these.) 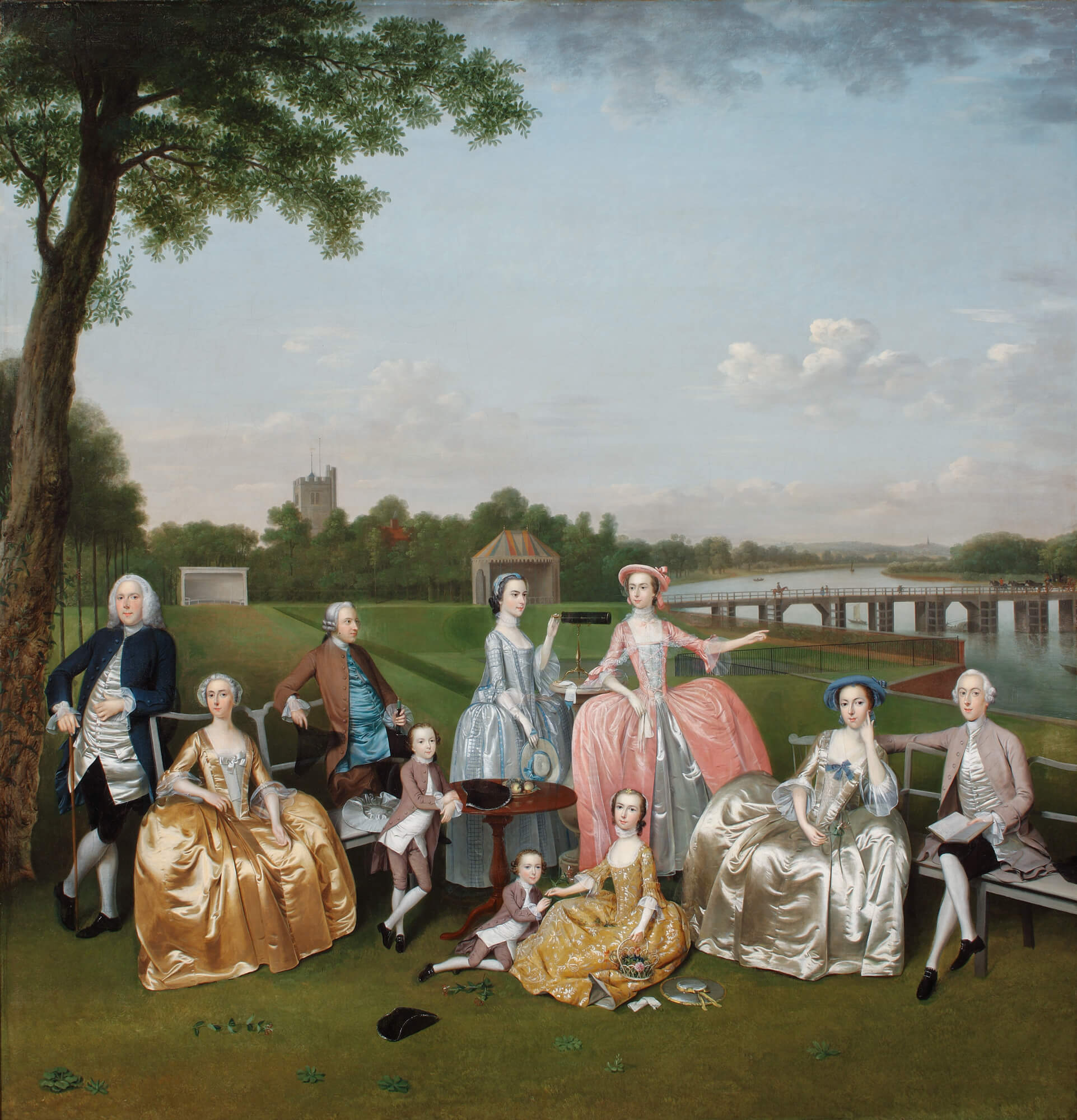 In Devis’ composition, Sir Joshua Vanneck (1702-1777), a wealthy merchant, is shown at the left. The Vannecks’ pride in their success—property, learning, and finery—is beautifully captured. Although no document exists identifying the individuals in this painting with certainty, the group probably includes: Mrs. de la Mont (Vanneck's sister), four Vanneck daughters, two sons, and two sons-in-law. The married couples are Elizabeth and her husband the Hon. Thomas Walpole (1727-1803) and Anna Maria Cornelia and her husband Henry Uhthoff. The remaining children are Gertrude, Joshua (d. 1816), Gerard (1743?-1791), and Margaret, the youngest daughter, who is seated on the ground. (Vanneck’s wife died two years before this painting was made.)

Devis’ work could be somewhat formulaic, relying on set props (like the telescope and table included here) and portraying his subjects in a stylized, doll-like way, with little sense of real portraiture. This, however, is one of his most spectacular works. The figures, in their gorgeously rendered satins, appear almost like petits fours arranged in a perfect setting. The work is full of visual delights to discover, from the shine of the shoe buckles, to the individual stems of flowers distributed carefully amongst the figures.

You can see an example of a family portrait from the next century in the A Sporting Vision exhibition. Victorian artist Frederick Herring is represented by four paintings, including a charming portrait of horse trainer Thomas Dawson and his family. Like the Vannecks, the Dawsons are posed outdoors, arranged in front of their comfortable home. The painting is intimate in scale. It also exudes a touch of Victorian sentimentality, in the picture-perfect pink-cheeked children and their loving parents and pets. The well-dressed Dawsons, while displaying comfort and affluence, also look at home outdoors, perfectly happy in the company of their dog and pony, appropriate for the family of a man who revolutionized horse training. 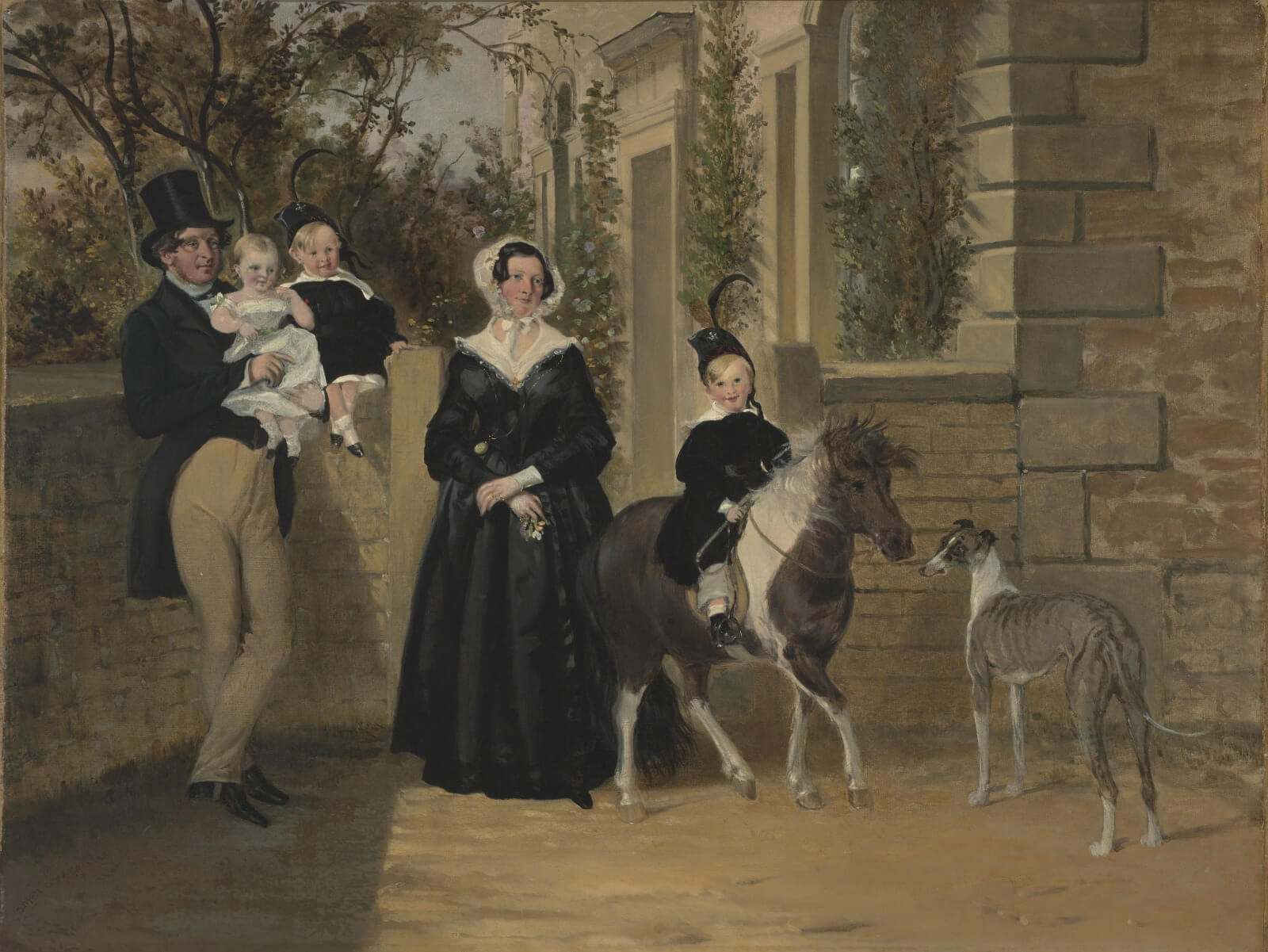 A former coach painter and even driver, Herring was a self-taught artist (although he may have received some instruction from Abraham Cooper) who rose to prominence in the sporting field in the mid-nineteenth century. He had numerous royal patrons, including Queen Victoria, and was one of the best-known animal specialists of his day.

Finally, let’s look at another one of my favorites in the Frick’s permanent collection, Thomas Gainsborough’s Portrait of Sir Richard Brinsley Sheridan c. 1785. Although Gainsborough often proclaimed his preference for landscape painting, his famous and much-in-demand society portraits earned his living. This painting is the last of seven Gainsboroughs purchased by Henry Clay Frick between 1903 and 1918. 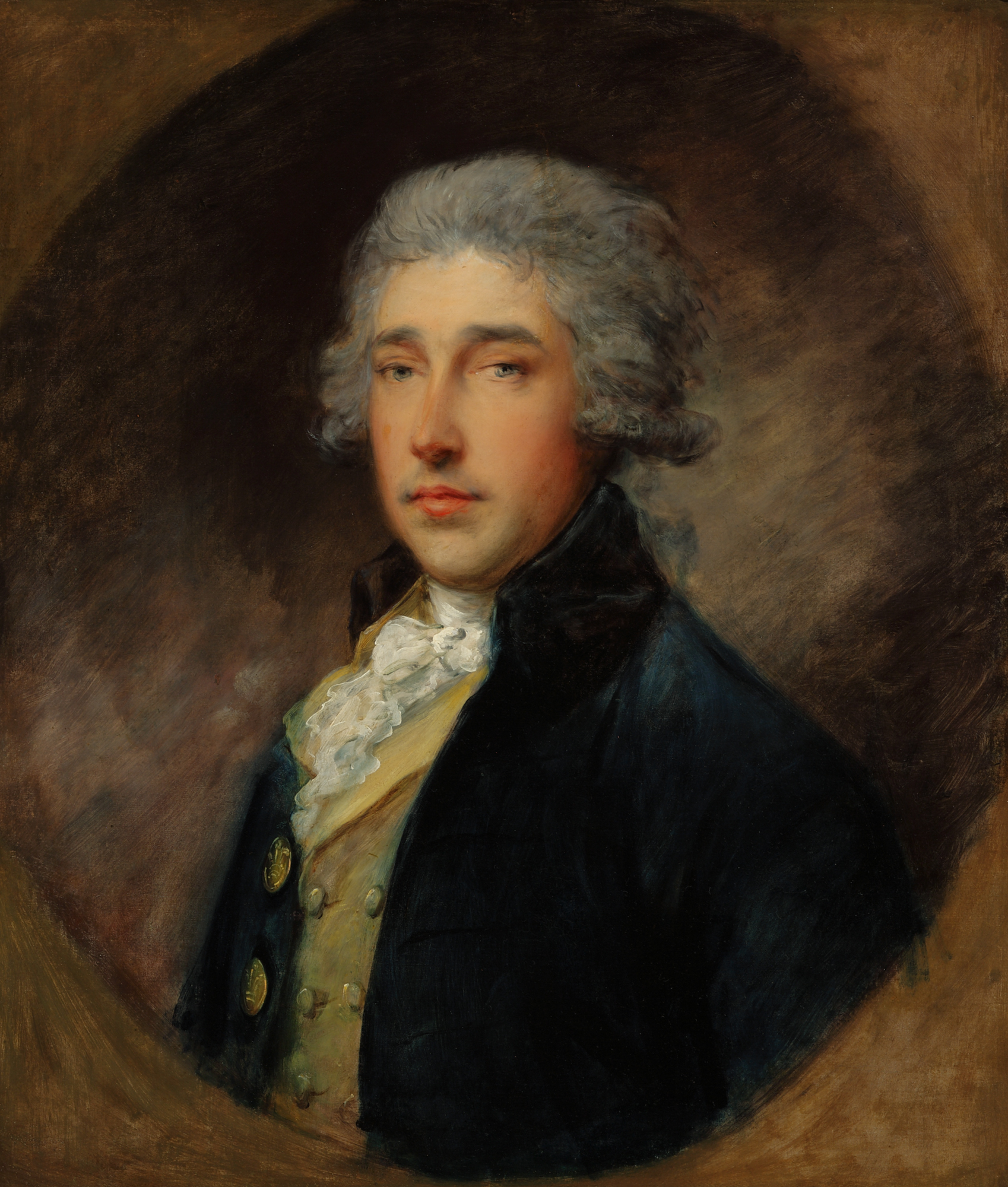 Richard Brinsley Sheridan (1751–1816) was an eminent lawyer, Member of Parliament, and playwright. Today, he is probably best remembered for his oft-revived comedies The Rivals and School for Scandal, which wittily satirize British society. He was part of a remarkable circle of writers and artists, which included Gainsborough and Reynolds, who met at the home of Sir George Beaumont (whose portrait by Sir Joshua Reynolds is also in our collection, and currently installed in the parlor at Clayton). Sheridan married the singer and famous beauty Elizabeth Linley; their elopement was one of the great romantic scandals of the day. Gainsborough’s renowned full-length portrait of Mrs. Sheridan is in the collection of the National Gallery of Art, Washington, DC.

This portrait of Sir Richard displays Gainsborough’s characteristic sketchy technique and vigorous brushwork, thought to be quite unorthodox by fellow members of the Royal Academy. Here, particularly around the eyes, the brushwork imbues the face with a sense of active intelligence, set off by the raking light which brilliantly illuminates his face, his glowing necktie, and, as the light crosses his shoulder, the rich blue velvet of his jacket. 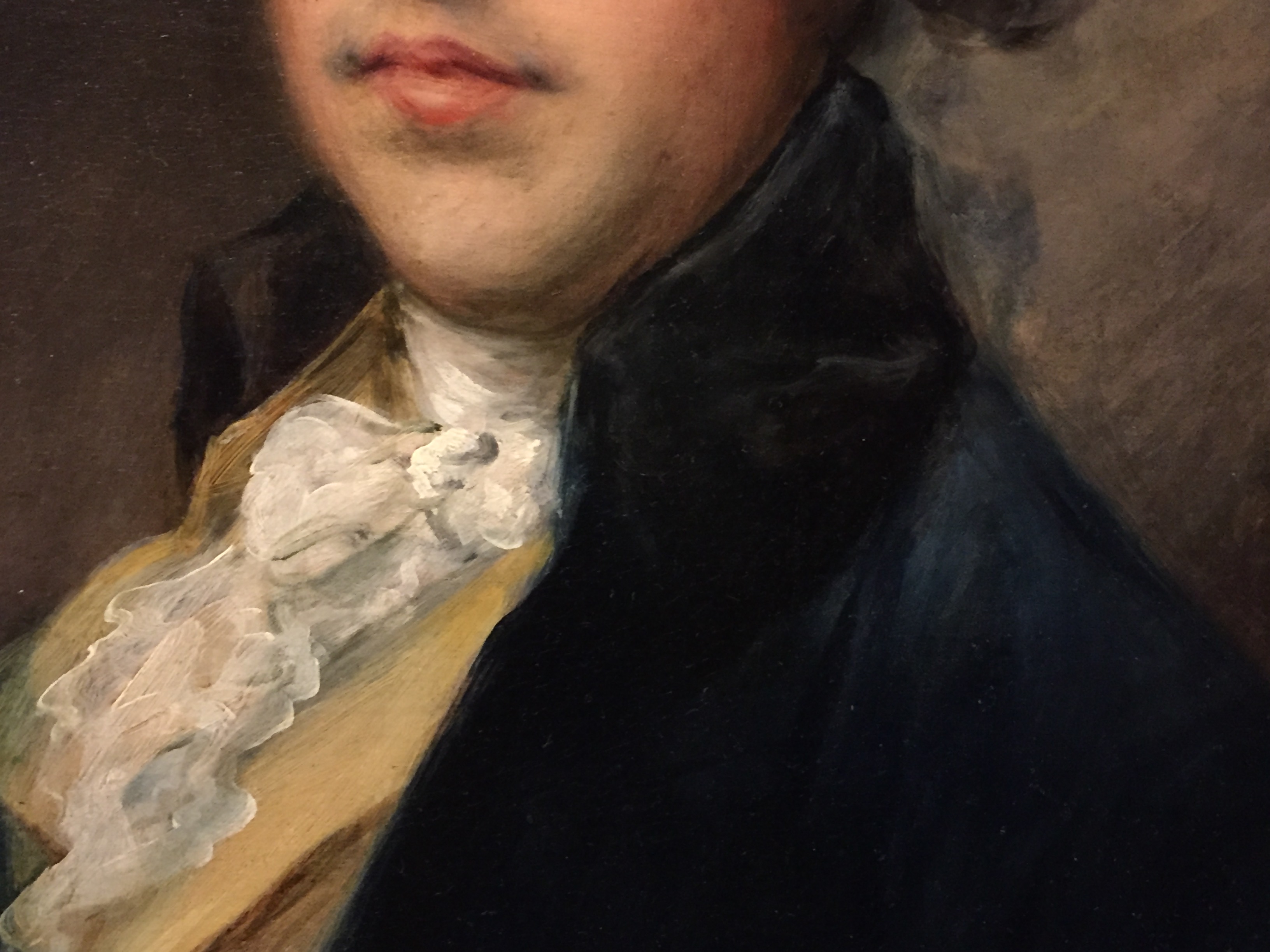 And now, to stretch our comparisons perhaps beyond reason, Art historian Walter Shaw Sparrow (1862-1940) famously likened the sensitivity of John E. Ferneley, Sr.’s portraits of horses to Gainsborough’s portraits of people. You can see Ferneley’s work in A Sporting Vision, which features a portrait of the racehorse Filigree and her foal, as well as a comedic series of ten oil sketches documenting the exploits of visiting Hungarian, Count Sandor, as he learned the British sport of fox hunting and attempted to master “riding to the hounds.”

Both A Sporting Vision and our permanent collection are full of stories and artists waiting to be discovered. Spend an hour in The Frick Art Museum this summer, and you may feel like you’ve made a quick trip across the pond. 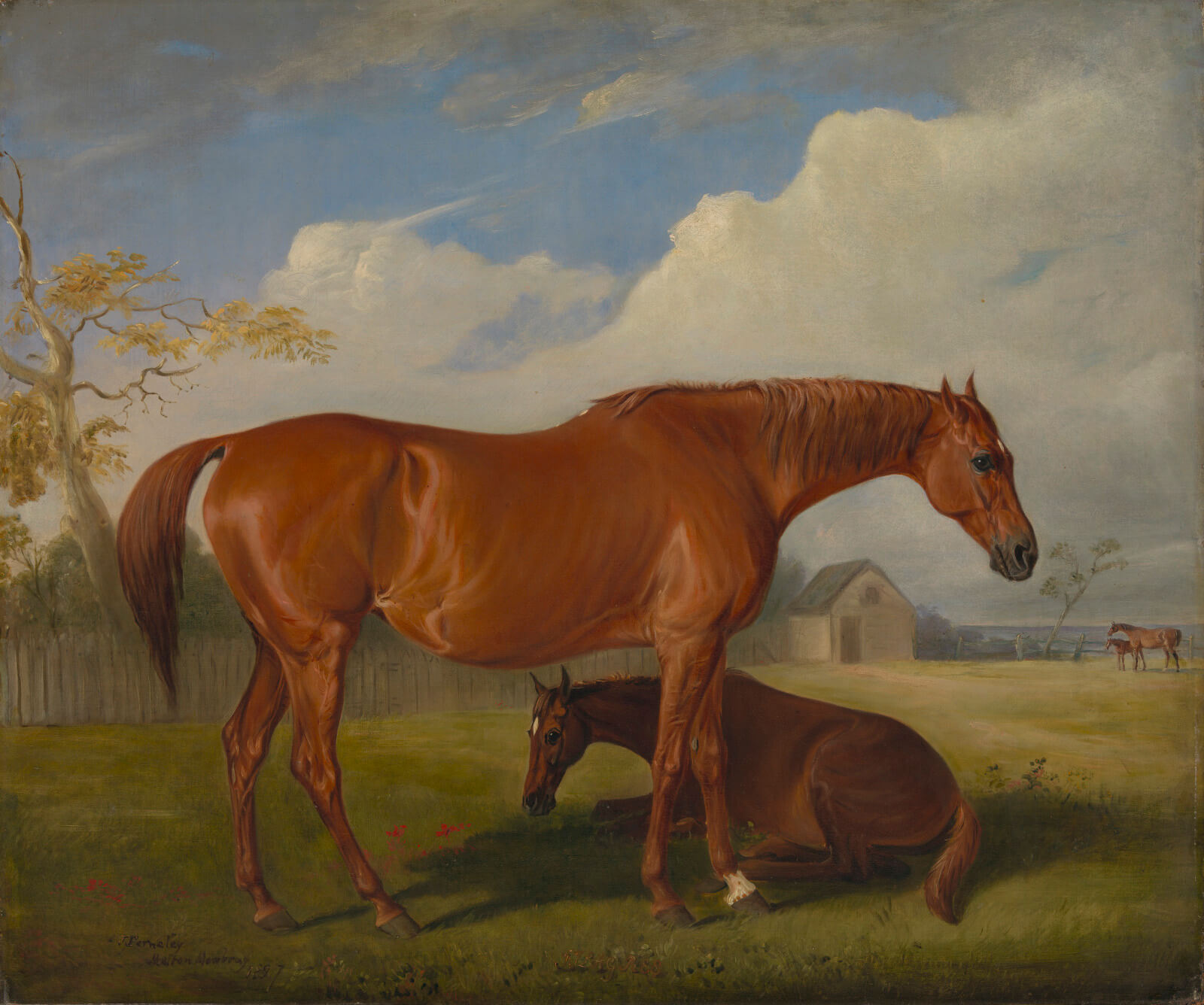