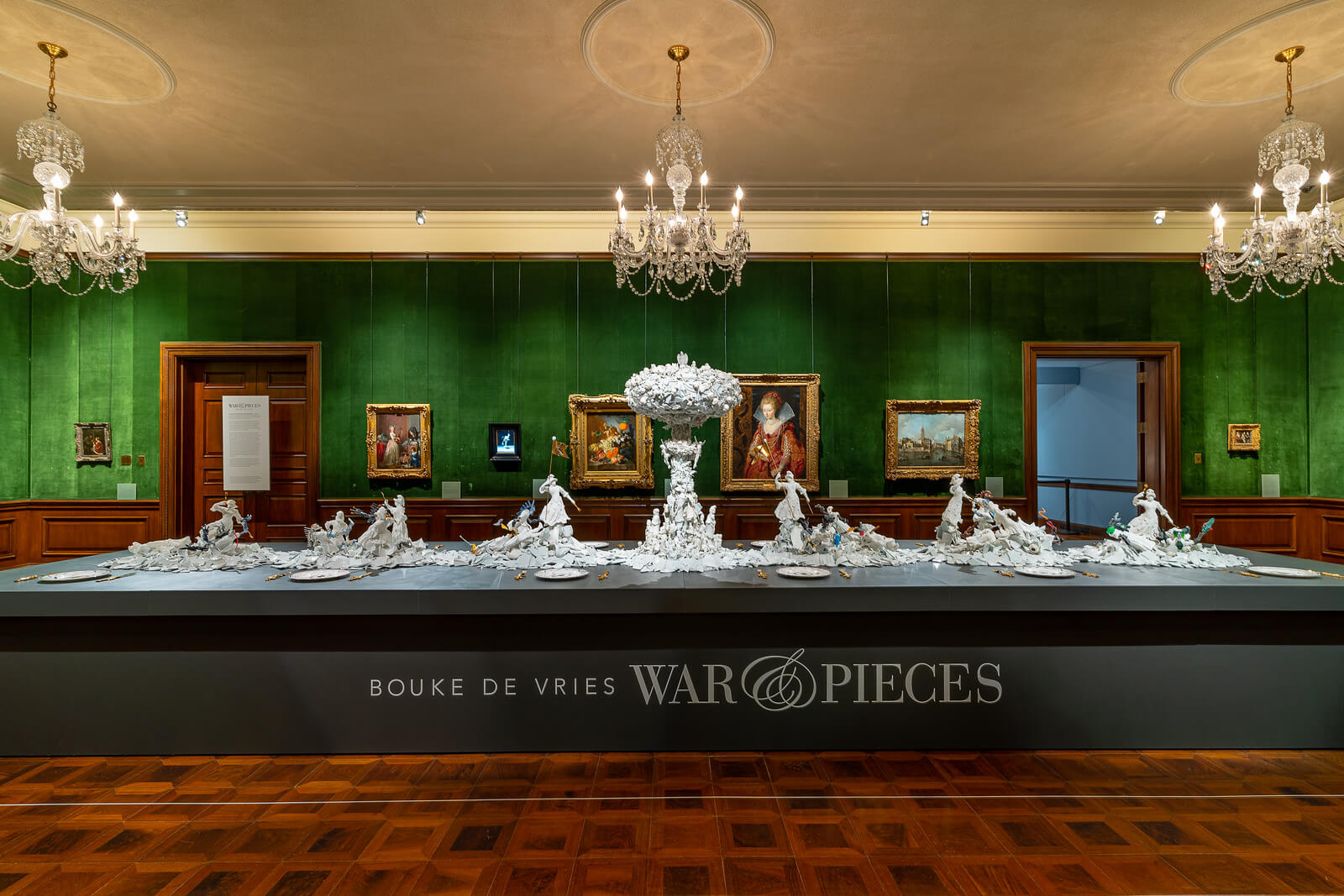 De Vries derived inspiration for the installation from the sophisticated figural centerpieces that adorned the banquet tables of the European aristocracy during the 17th and 18th centuries, known as surtout de table. Typically displayed during the dessert course for special occasions, the figures were initially crafted from sugar, a rare and prized commodity that signaled the wealth of the host. In the 18th century, European porcelain manufactories began to produce more enduring replacements of the sugar forms. These scenes typically replicated allegorical vignettes, mythological figures, or architectural follies. The designs were imbued with symbolic value that the diners would recognize and understand; the classical, historical, and political themes referenced were intended to generate conversation among guests around the table.

De Vries references these traditions with a modern centerpiece assembled around a mushroom cloud explosion that has rendered the table a ravaged battleground. Figures clash across a heap of porcelain ruins, armed with brightly colored contemporary plastic toys—indestructible symbols of today’s waste. 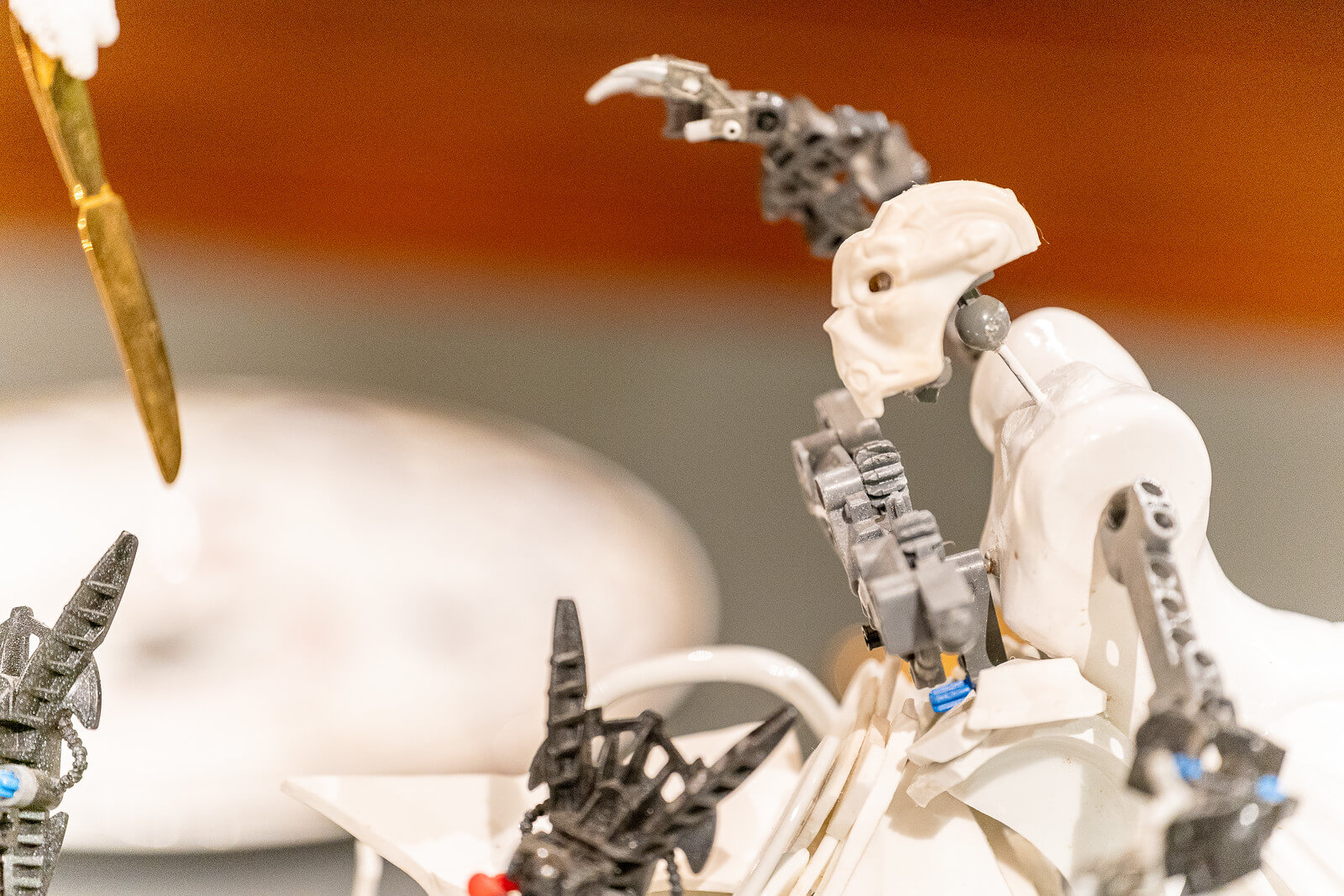 De Vries (Dutch, b. 1960), who lives and works in London, began his career in fashion design before transitioning to ceramics conservation and restoration. Using his skills as a restorer, de Vries resurrects broken porcelain pieces that would otherwise be discarded and uses them to create sculptures that tackle both contemporary and historic issues. Associate Curator of Decorative Arts Dawn Reid Brean had a transatlantic chat with de Vries, who directed the installation of War & Pieces via video conference due to the COVID-19 pandemic, about his work.

How did your career as a conservator influence your artistic ambitions? When did you begin creating art?

For years I had looked for a more creative outlet but just couldn’t find something that felt right, not derivative. Then one day I was thinking how writers are advised to make their first book about what they know. I decided to apply that to myself, using broken ceramic objects regarded as worthless because of their damaged condition and creating new pieces with them. That way I could apply all the conservation skills and restoration techniques I had learned, developing and applying them to my art. This was a time when there was a renewed interest in ‘makers’; also, the idea of recycling was coming to the fore.

You’ve worked with the kintsugi technique (a Japanese ceramic tradition that uses precious-metal infused lacquer to refurbish cracked or broken pieces). Can you explain how that process relates to your practice today?

I have been familiar with kintsugi from my training as a conservator thirty years ago. I love the philosophy: celebrating damage as part of an object’s history rather than trying to hide it; enhancing the beauty of the damage. I have used the technique ever since and now use it in my own works. I have also played with the idea of kintsugi, for example, making pieces held together with gold-plated Sellotape.

How would you describe War & Pieces? Who is at battle here?

War & Pieces is an installation based on the surtout de table of the 17th and 18th centuries. I used as a reference the grand ball given by the Duchess of Richmond on the eve of the Battle of Waterloo. Instead of a real battle, I staged it on the banqueting table, which is rather less harmful. In part it concerns the futility of war with the atomic mushroom-cloud centerpiece symbolizing total destruction. But I’m still making it beautiful, as I like such contradictions.

Do you have a favorite hidden detail in the centerpiece?

At the base there is a doll’s house sink, a reference to the English expression “everything but the kitchen sink”—well, in this installation that’s included, too. 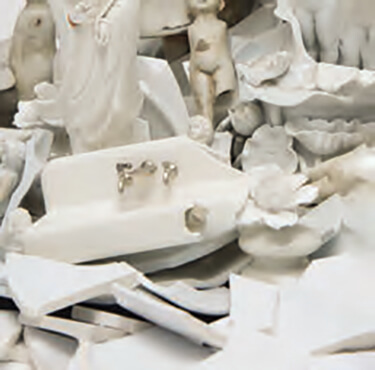 War & Pieces has toured Europe and Asia and now North America since 2012, and it has been different at every venue. How does it feel to see different institutions interpret your work?

Fascinating—it seems to adapt itself so well to its surroundings. It looks great in an ornate setting like a formally dressed dining room, but it’s also just as good in a minimalist gallery setting.

You’ve traveled a lot for your work. What is your favorite place you have ever visited?

The next place is always the most intriguing, the next step in life’s great adventure.

When you are not creating art, what are you doing?

Not a lot, LOL. It’s so much [a] part of my life. It’s very enjoyable and it’s what I’m happiest doing. The only other thing in my life also all-consuming is my dog, Sonny.

Five words to describe your work?

A version of this interview first appeared in our Fall / Winter 2020–2021 magazine. View a digital issue of the full magazine here.

While The Frick Art Museum is currently closed to the public, you can learn more about War & Pieces on this audio tour with curator Dawn Reid Brean.
Our Story 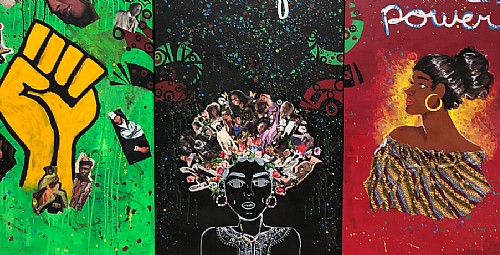 Beautifully Black in Red and Green: A Youth Art Installation 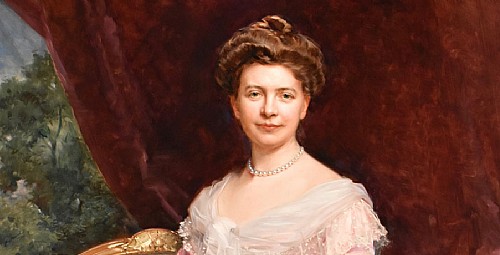 Dressed to Impress: The Conservation of Mrs. Peacock 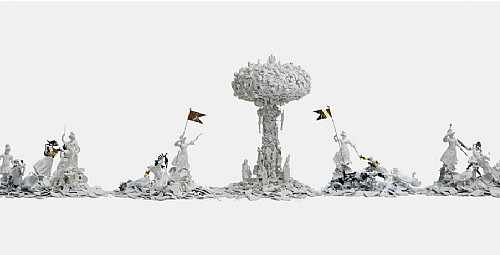 Previous Story: The Fricks Take a Trip: Egypt
Next Story: The Story Behind The Frick Reflects: Looking Back, Moving Forward